Updated Hector gets minor cosmetic updates to the exterior; expected to get more equipment and a dual-tone interior. 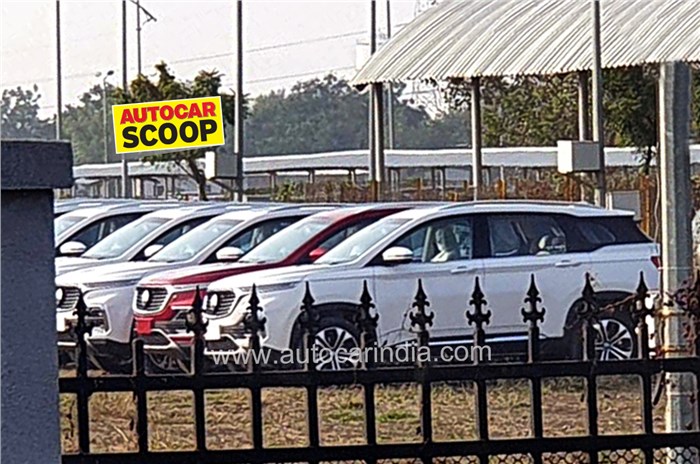 The MG Hector facelift has been spied undisguised ahead of its expected launch next month. The updated SUV in the image gets minor cosmetic updates to the exterior with the interior expected to get new dual-tone upholstery.

·        Styling updates include a revised grille and new alloy wheels

Compared to the Hector currently on sale, the updated SUV features a revised grille with horizontal slats sitting between the high-set LED daytime running lights. The rest of the front fascia appear unchanged from the current model replete with the low set headlamps and chrome trimmings.

Down the sides the noticeable change is are the new design five-spoke alloy wheels. While not clearly evident in the image, the updated Hector is expected to get larger alloy wheels, up from 17 inches to 18, which do help give it a more purposeful stance.

The cabin layout is expected to remain unchanged with the biggest change expected to be a new dual-tone theme inside, along with some additional equipment.

Moving to the engines, expect the current range to be carried forward – a 143hp, 1.5-litre turbo-petrol and turbo-petrol mild-hybrid, and a 170hp, 2.0-litre diesel. Gearbox options will include a standard six-speed manual and the option of a six-speed dual-clutch automatic with the non-hybrid turbo-petrol engine.

As before the MG Hector will go up against the popular Hyundai Creta and Kia Seltos, Tata Harrier, and the Nissan Kicks. Expect prices to for the updated Hector to start slightly higher than the current SUV.

Also expected to arrive in 2021 is the standard petrol variant of the ZS SUV. The standard ZS will look notably different from its all-electric sibling, the ZS EV, as it will be the facelifted model that was shown at the Auto Expo 2020. The ZS EV is yet to receive a facelift.