Maruti Suzuki XL6: What to expect

From engine and gearbox options to design details and equipment, here are the most important things to know about the upcoming Ertiga-based crossover. 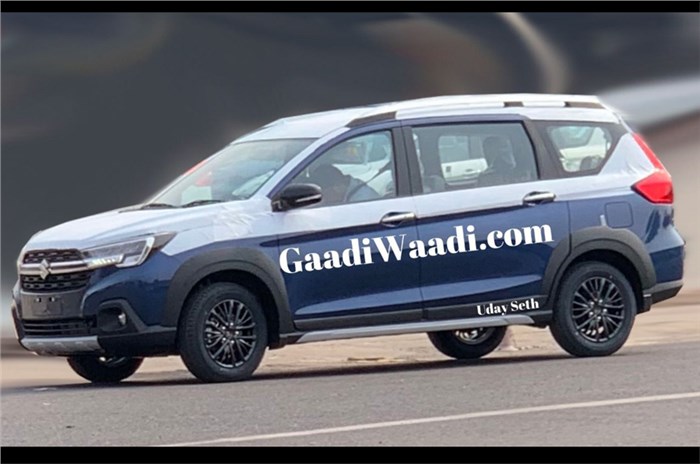 Maruti Suzuki’s sales may be down overall, but the brand is powering on ahead with quite a few new launches around the corner. Its Ertiga-based crossover, the XL6, is scheduled to launch on August 21 but just what is this new model? Is it just a beefier Ertiga or is it something more? We answer five key questions so that you know what you can expect from the Maruti XL6.

In a word, no. While some body panels are shared with the MPV it is based on (like the doors and the tailgate), the XL6 gets a more upright nose with a flatter hood design, a new grille, more angular headlights with LED DRLs, chunkier front and rear bumpers with skid plates and roof rails. The XL6 also has the ubiquitous body cladding along with side and the rear that is seen on every crossover, along with a slightly raised ride height. Higher variants are expected to get black alloy wheels, with blacked out elements like the wing mirrors. All in all, at first glance it may seem familiar, but the XL6 should stand out in its own right.

Are the interiors different?

The Ertiga MPV is a proper 7-seater, while the XL6 – as its name implies – will be a 6-seater. The XL6’s second row will feature two captain seats instead of the bench found in the Ertiga. In addition, the beige cabin found in the Ertiga (higher variants get a faux wood finish on the dashboard) will be replaced with an all-black finish for the XL6. We can also safely expect the XL6’s cabin to sport some premium upholstery to help further differentiate it from the Ertiga. However, interior space is expected to be similar, if not the same.

What are the features on offer?

While we have yet to get our hands on the exact list of equipment on offer, we do know that standard safety kit for all variants will include dual front airbags, ABS with EBD, rear parking sensors, a speed warning system and seatbelt reminders for the driver and co-driver. Expect higher variants to get a rear camera too.

In terms of creature comforts, the XL6 is expected to get Maruti Suzuki’s SmartPlay Studio infotainment unit, which comprises of a 7.0-inch touchscreen display that comes Android Auto and Apple CarPlay compatibility. The top-spec trims are likely to get automatic climate control, automatic headlamps and wipers, cruise control and height adjust for the driver’s seat.

What’s under the hood?

Maruti is not expected to introduce the XL6 with a diesel engine option even though the Ertiga currently gets two – the 90hp, 1.3-litre DDiS200 and the 95hp, 1.5-litre DDiS225. The 1.5-litre petrol engine that comes with mild-hybrid technology, which does duty on the Maruti Ciaz and the Ertiga, will be offered with the XL6. Producing 105hp and 138Nm of torque, the motor will come standard with a 5-speed manual for now. There are talks of introducing the same 4-speed torque convertor automatic gearbox available on the Ciaz and Ertiga at a later date. Seeing as the XL6 is expected to be heavier than the Ertiga, expect a small drop in performance and mileage.

We’ve been reporting for a while now that the XL6 will retail via Maruti Suzuki’s premium Nexa outlets. In addition, the 6-seater will also be a more premium offering than the Ertiga based on its kit. Hence, the XL6 is likely to cost about Rs 50,000-75,000 more than the petrol-powered Ertiga (Rs 7.45-9.57 lakh*). It isn’t clear which models Maruti is targeting with the XL6 in terms of rivals though at this price point, the 6-seater will find competition in the form of the recently launched Renault Duster facelift (Rs 7.99-10.00 lakh*), Maruti’s own S-Cross (Rs 8.86-11.49 lakh) and even the Hyundai Creta (Rs 10.00-14.16 lakh*).