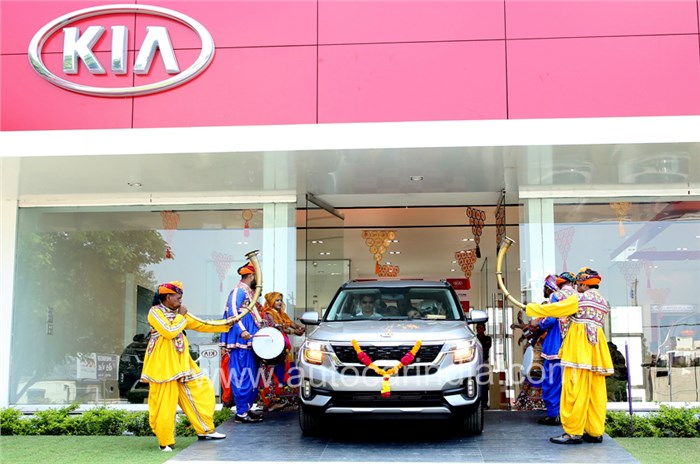 Can any vehicle manufacturer in India stop the relentless march of Kia Motors? In barely six months, the Korean carmaker and sibling of Hyundai has taken a 2.53 percent share of the passenger vehicle (PV) market, and recorded a 7.43 percent share of the utility vehicle (UV) market – a robust performance that puts most established OEMs in the shade. Considering the past year constituted depressed market conditions – a scenario that is unlikely to change hugely for most of 2020 –imagine what Kia's sales and market share would have been in happier times in the Indian automobile market.

What has helped Kia Motors India's speedy run has been the surging demand for the Seltos SUV. From its launch on August 22, 2019 to end-January 2020, the Seltos sold a total of 60,226 units (see table below), which works out to a monthly average of 10,037, a stupendous going for a brand-new brand and model. Not surprisingly, it is also leading the Top 5 UV bestsellers chart.

Kia has further upped the ante by launching the luxurious Carnival MPV in India priced starting from Rs 24.95 lakh and topping off at Rs 33.95 lakh. Available with a sole diesel-automatic powertrain, the MPV can be had in three seating configurations and three trims – the entry-level Premium variant as a 7- and 8-seater, the mid-spec Prestige in a 7- or 9-seat arrangement, and the range-topping Limousine variant as a 7-seater with plush second-row seats.

The Carnival, which got a headstart with despatches of 450 units to dealers in January, is said to have received 3,500 orders, of which 70 percent are for the top-spec Carnival Limousine. Should the MPV sustain the initial momentum, Kia’s second model for India could be its second hit in a row.

At the recent Auto Expo 2020, Kia Motors India took the covers off its bold new compact SUV, the Sonet. The Sonet concept previews a production-spec, sub-four-metre SUV (codename: QYi) that will join Kia’s line-up around August. The Kia Sonet, which will only be produced in India (which means the company will be targeting sizeable exports to global markets), shares its underpinnings with its distant cousin, the Hyundai Venue.

When launched in the second half of 2020, the production-spec Kia Sonet compact SUV is expected to carry a sticker price of Rs 7.00-11.50 lakh (ex-showroom). Aside from the Hyundai Venue, the Kia Sonet will also have to see off a whole lot of rivals including the Maruti Vitara Brezza, Tata Nexon, Ford EcoSport, and Mahindra XUV300. Kia has gone on to dominate the midsize SUV segment with the Seltos, and will be hoping to repeat the success in the compact SUV segment. Given the Auto Expo visitors' initial response to the Sonet, the first signs sure are positive.

That's not all. Kia is also seriously evaluating the MPV market in India, which has seen a resurgence of late with the second-generation Maruti Ertiga. Maruti's exit from the diesel segment means there will be a sizeable vacuum in the diesel MPV market. The Kia midsize MPV is still on the drawing board and hasn’t been fully green-light yet, and the earliest it can come to the market is by end-2021. It’s likely that the all-new MPV will be exported to other countries as well.

For Hyundai Motor India, its Venue compact SUV, since its introduction in May 2019, has been giving a tough fight to the segment stalwart Maruti Vitara Brezza and, together with the established Creta, it has sold a total of 1,51,844 units in the April 2019-January 2020 period, which marks a handsome year-on-year growth of 48 percent. Add 1,030 units of the Tucson and Kona, and Hyundai's total UV sales is at 1,52,874 units in the first 10 months of FY2020, a YoY growth of 47 percent.

Thus, it should not come as any surprise that Hyundai has notched a solid 5.27 percent increase in UV market share – from 13.59 percent a year ago to 18.86 percent.

Do the math of the Hyundai-Kia combine in the Indian UV market and what you get is a total UV market share of 26.29 percent, a number good enough to get established rivals worried.

The first-generation Creta has been a huge sales success and it dominated the midsize SUV segment for much of its lifespan. So, the next-gen Creta, revealed at the Auto Expo and to be launched on March 17, has big shoes to fill, and will see some serious competition like the Kia Seltos, the MG Hector and the Tata Harrier. Expect prices for the new Creta to be in the range of Rs 10-16 lakh (estimated, ex-showroom).

Given the sales momentum is in its favour, Hyundai and Kia are looking to tap synergies to enhance Hyundai Motor Corp’s hold of the Indian PV market, give and take a little competition. The Korean duo is further enabling increased profitability and cost-competitiveness by leveraging platform- and part-sharing to combine volumes to drive better component pricing with common suppliers.

In a recent interaction with our sister publication Autocar Professional, SS Kim, MD and CEO, Hyundai Motor India, said, “A relevant differentiation in terms of product line-up, brand positioning and brand image will be there between the two brands, and that is also our target, but, in some cases we may compete directly against each other. So, we will continue to remain two different companies with two completely different strategies.”

“We will never utilise each other’s production capacities – that question doesn’t arise at all – and will always remain different companies when it comes to direct operations. What we would leverage, however, would be synergies in terms of back-end operations such as procurement, R&D, and platform-sharing to reduce costs and bring value-addition, and therefore benefit the end customer.”

With the new Hyundai Creta set to be launched next month, Kia might find it hard to sustain the initial growth experienced with the Seltos. But will Hyundai be able to regain its lost crown from its own sibling? According to Kim, “Yes, there might be certain cannibalisation to some extent, but it will be a very minimal one because that segment (midsized SUV) is growing at a fast pace and we plan to expand the overall market size together.”

Renault India is back in the news and that's thanks to the sub-four-metre, 7-seater Triber, which along with the Duster, Captur and Lodgy makes up Renault's UV range in India. The Chennai-based carmaker sold a total of 36,377 UVs in the April 2019-January 2020 period, which marks a near-200 percent YoY increase (196 percent), albeit on a low year-ago base. The model that's making the difference is the Triber.

Launched on August 28 at an aggressive Rs 4,95,000, through to Rs 649,000 for the top-end variant, the Triber's compact size, spacious interiors, and flexible seating configurations, coupled with the price, seems to be drawing buyers. Of this cumulative total, the Triber accounts for the bulk of sales and has been averaging monthly sales of over 4,900 units a month. The Renault Triber is currently available only with a single engine-gearbox – a 1.0-litre petrol engine with a 5-speed manual transmission. An AMT automatic version will be introduced soon.

On February 5, Renault unveiled the Triber AMT automatic at the Auto Expo, with a launch slated for Q2 2020. Further down the road, Renault will also introduce a more powerful, 1.0-litre, turbo-petrol engine to the compact 7-seater's line-up.

Understandably, the company and its management are enthused. "With this, our commitment was to launch a car that would redefine the conventional notions of the Indian automotive industry. The Renault Triber has changed the rules in terms of space and modularity, targeted at a wide set of customers across segments, led by the B-segment. It also gave us the opportunity to be present in the largest and the fastest-growing segment of the Indian automobile market. It is very motivating to see the outstanding response from customers, and today we will take another step forward in the journey,” said Venkatram Mamillapalle, Country CEO and MD, Renault India Operations.

MG Motor India is seeing increased sales traction for its Hector SUV. The Hector, which sold 3,130 units in January, and a total of 19,060 units in the fiscal year until now, comes in four diesel variants, two petrol-manual variants, two petrol-automatics, and three petrol-hybrids. The company currently has a UV market share of 2.35 percent, a strong performance for a new brand in India.

As of last month, MG Motor India had close to 40,000 bookings in hand, and has begun the second shift at its plant in Halol, Gujarat.

Take a close look at the UV market share statistics below and the only ones in the black are Hyundai, Kia, MG and – two new brands but all three with new products. Given the new scheme of things, the Hyundai-Kia combine now has 26.29 percent of the UV market, which takes it ahead of both Maruti Suzuki India (24.77 percent, down from 28.34 percent a year ago) and Mahindra & Mahindra (20.43 percent, down from 24.21 percent a year ago). The other players fight for bits and pieces of the remaining 30 percent UV market.

With less than 45 days to go for BS6 mandate to kick in, OEMs are all focused on the emission technology upgrade. But as the Auto Expo has shown – in the form of several new models either revealed or launched – the consumer fondness for SUVs will help this segment continue firing on all cylinders in 2020 and beyond. 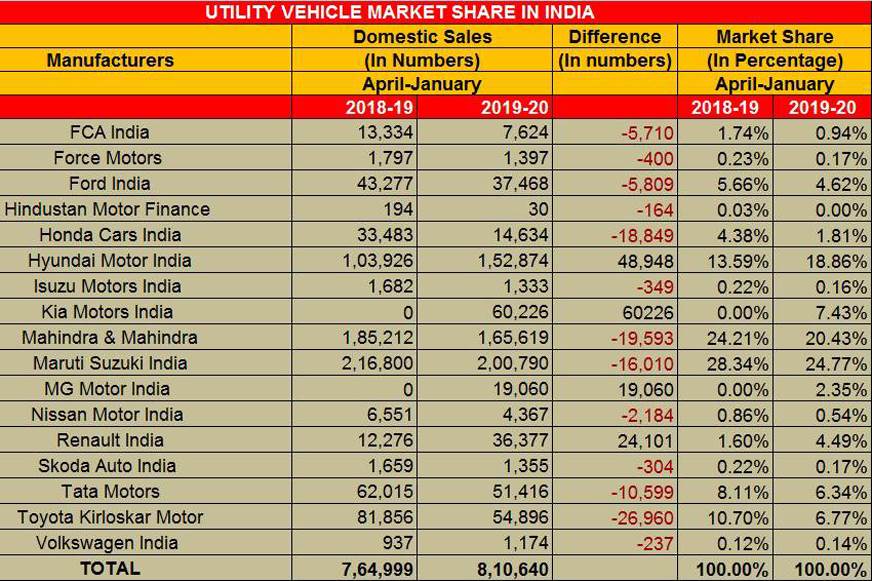