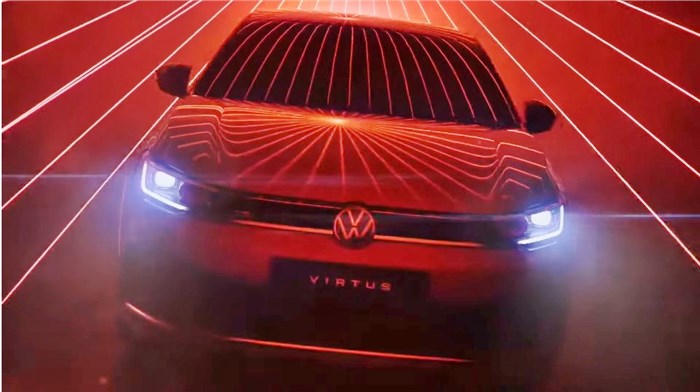 Hot on the heels of the Skoda Slavia’s market launch, its Volkswagen counterpart, the Virtus sedan, will be unveiled on March 8. The German brand recently confirmed that the sedan will be called Virtus in India and has also teased the top-spec GT variant, showing a few design details of the car.

Volkswagen’s new teaser suggests that the Virtus will get a top-spec GT variant that will have unique sporty bits on the outside along with a slightly different equipment list, to differentiate it from the standard car. A similar approach had also been adopted for the Taigun SUV.

The teaser confirms a healthy dose of chrome, GT badges, and possibly a different design for the alloy wheels to set it apart from the standard variants. Importantly, the 1.5-litre TSI turbo-petrol engine will be reserved only for the GT variant. Again, similar to the Taigun, it could be offered in both manual and automatic versions, but only in fully loaded guise.

Volkswagen Virtus: what else is known?

Unlike the Slavia, which is an all-new model, the Virtus has already been on sale in markets like South America since 2018. The model for India will be the facelifted car that will see a global debut  and will most likely go on sale in India first, followed with launches in South America and other markets.

The upcoming Virtus will be the fourth model to be based on the localised MQB-A0-IN platform after the Skoda Slavia, Kushaq and Volkswagen Taigun. The Virtus will be a much larger car than the Vento it replaces, and will likely have class-leading dimensions, interior and boot space when it goes on sale.

As a facelifted model, the Virtus is expected to debut with revised bumpers, grille, headlamps and alloy wheels, as well as new and updated equipment on the inside. The equipment list could in fact mimic that of the Taigun, meaning it could get 10-inch touchscreen, a digital instrument cluster, wireless phone charging, connected car tech, a sunroof, auto headlamps and wipers, a tyre pressure monitor, six airbags, and much more in top-spec guise.

As a sister model to the Slavia, the Virtus will also be sharing a lot of components with the former, including several body panels, interior trims, switchgear, seats and more.

Under the hood, the Virtus will use the same powertrain options as the rest of the Skoda-VW India 2.0 models. That means there will be the 115hp, 175Nm, 1.0-litre TSI and the 150hp, 250Nm, 1.5-litre TSI engines, the latter of which will likely be the sole offering on the GT Line variants.

The midsize sedan segment hasn’t seen much action of late, although the Virtus and Slavia pair could bring in a fresh lease of life. Upon launch, the Virtus will rival its sibling, the Skoda Slavia, along with the Honda City, Hyundai Verna and Maruti Suzuki Ciaz.

In other news, with the Virtus coming into production, Volkswagen will also phase out the Vento, which has been on sale since a long time. This inevitably means that production for the Volkswagen Polo, too, will end soon. You can read more about it here.

Do you think the VW Virtus, along with the Skoda Slavia, will be able to revive the sedan segment? Let us know in the comments below.