The first batch of 1,232 Made-in-India T-Cross SUVs are being exported to Mexico. 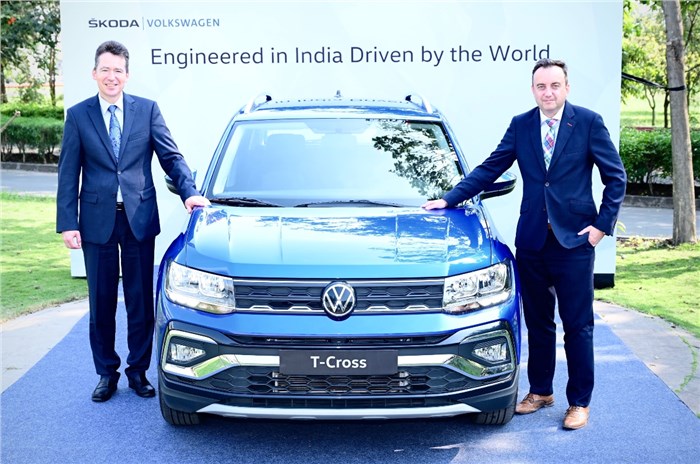 Volkswagen has announced that it has begun exporting the made-in-India T-Cross SUV. Built at the manufacturer’s plant in Chakan, near Pune, the first batch of 1,232 T-Cross SUVs are being shipped to Mexico from Mumbai.

Volkswagen T-Cross for export: what is it?

The made-in-India T-Cross for export is more or less identical to the Taigun midsize SUV that’s on sale in India. The differences are that the SUV is left-hand drive and it sports a ‘T-Cross’ badging instead of Taigun. It’s also worth noting that this model is not the same as the Euro-spec T-Cross we drove abroad in 2019.

Following Mexico, the made-in-India Volkswagen T-Cross is expected to be exported to other international markets as well. Volkswagen India began its export operations in 2011, and has since gone on to export over 5,45,653 cars, until December 2021, to 61 countries.

The T-Cross being exported is sold as the Taigun in India, with seven variants and two turbo-petrol engines on offer. They are the 115hp, 175Nm, 1.0-litre, three-cylinder unit and the larger 150hp, 250Nm, 1.5-litre, four-cylinder. Both engines come with a 6-speed manual gearbox as standard, with the 1.0 TSI getting a 6-speed torque converter option and the 1.5 TSI getting a 7-speed dual-clutch automatic option.

These engine options will also feature in Volkswagen’s next big launch for India, which will be a replacement for the ageing Vento sedan in its line-up. Dubbed the Virtus, the sedan is slated to launch in India in May 2022.

Is the Taigun your choice of midsize SUV? Leave your answers in the comments below.