We have compiled a list of the top 5 most-watched car comparison videos on the Autocar India YouTube channel. 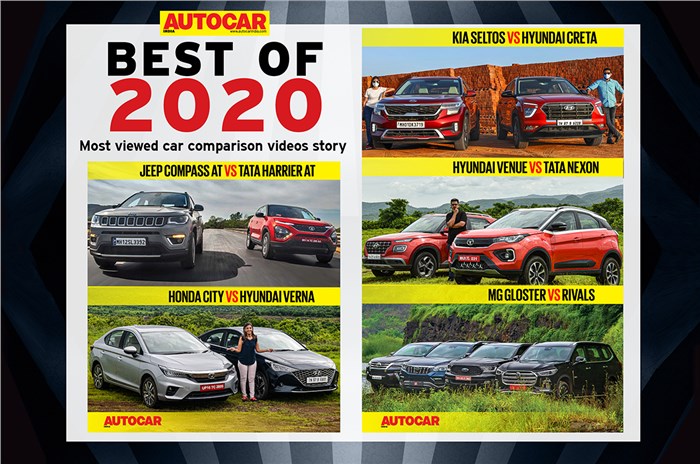 With 2020 almost at an end, and most of us already looking towards the models coming next year, we decided take a step back and look at the top five most viewed car comparison videos of 2020 on our YouTube channel.

These comparisons are comprised of the most talked about and anticipated cars of the year. A quick glance at the list below shows just how popular SUVs continue to be in our market, with all but one of the top five videos being from another segment.

We have listed the most watched car comparison videos below:

The Tata Nexon received a facelift earlier this year, which brought with it updated styling, more features and a more powerful 120hp 1.2-litre turbo-petrol engine. This made it a candidate to take on the segment benchmark – the Hyundai Venue, especially in 120hp, 1.0-litre turbo-petrol guise. Hence, we put compact SUVs head-to-head, in order to see whether the Nexon’s package was good enough to better the Venue.

When you think of  big, three-row, body-on-frame SUVs, the Toyota Fortuner, Ford Endeavour and, more recently, the Mahindra Alturas G4 are what come to mind. However, this year brought with it an all-new entrant to the segment – the MG Gloster. With its large frame, lengthy features list and driver aid systems, the Gloster is an enticing option. We test whether the newcomer has what it takes to compete in the segment against more established rivals.

2020 has also brought with it an update to the mid-size sedan segment as the fifth generation Honda City was launched, as well as a facelift for the Hyundai Verna. Incidentally, these are also the only models in the segment to continue to offer a diesel powertrain, with all the others having switched to petrol power only. Hence, it was only fitting that we pit the 100hp, 1.5-litre turbo-diesel equipped Honda City up against the 115hp, 1.5-litre turbo-diesel Verna to see which sedan comes out victorious.

The Tata Harrier too received a much-needed update early-on in 2020, which added a number of new features, and more importantly an automatic gearbox option. The Harrier also received a more powerful version of the 2.0-litre, Multijet turbo-diesel engine, now making 170hp. This made for an interesting comparison between the Harrier and the Jeep Compass, which is also available in diesel-automatic configuration and uses the same 2.0-litre, Multijet turbo-diesel engine. Although, this isn’t an apple to apples comparison as the Compass is positioned in a higher price bracket, we wanted to see which diesel-automatic SUV made the best case for itself.

The Kia Seltos was a runaway success for the Korean carmaker when it was introduced in our market in 2019. The Seltos has kept up that momentum as it continues to be a strong performer in the mid-size SUV segment. Although, one major change in the segment since its launch has been the introduction of the all-new Hyundai Creta. While, both models share the same platform and engines, they are tuned differently and have a vastly different approach to styling, both on the outside and inside. We pit the two SUVs against each other to see which one comes out as the king of the mid-size SUV segment.