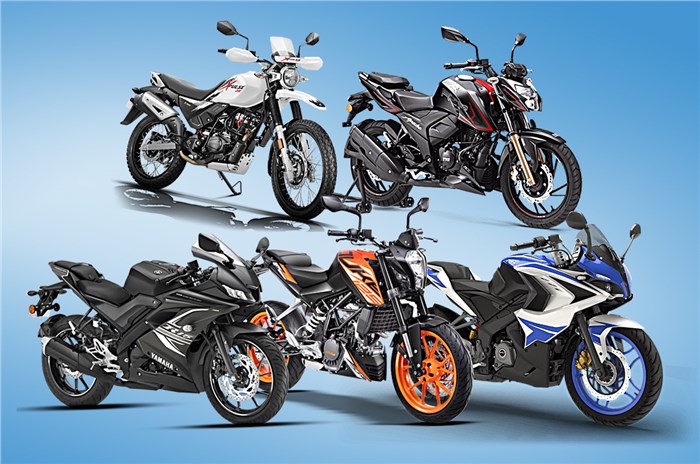 The Indian two-wheeler space has changed quite drastically over the last couple of years. First, there was the introduction of the mandatory ABS norm, then came the hike in the third-party insurance costs and a few months ago, the transition to BS6. As a result, the price of nearly every IC-engined two-wheeler in our market went up by about 15-20 percent, some by even more. Before these changes came about, the bikes you see below, used to cost much less, a couple of them were also priced under the Rs 1 lakh mark. However, since prices all around have inflated, our list of best bikes under Rs 1 lakh has now expanded to a list of the best bikes under Rs 1.5 lakh.

Before we start, we’d like to admit that this ‘under Rs 1.5 lakh’ title is a bit of a misnomer. That is because we’re considering the best five motorcycles that have their ex-showroom (Delhi) prices under Rs 1.5 lakh rupees. After taxes, some of them will cost you a little over that mark.

Last year, the Hero XPulse 200 featured on our list of top motorcycles under Rs 1 lakh. However, with its BS6 update, its price exceeded that mark. For the extra money, you get a noticeably more refined engine that now employs an oil-cooler. The XPulse 200 was introduced as a long-overdue replacement to the Impulse, and in a market where affordable off-road motorcycles are few and far between, the model was certainly a welcome addition. Now, with the updates it features, it’s an even better package at a rather affordable price.

The XPulse also boasts of a single-channel ABS and a Bluetooth-compatible instrument cluster. Another impressive feature is the 21/18-inch wheel combo that's usually seen on more serious dirt bikes.

The R15 V3.0 has a lot going for it, it looks stunning, and is the quickest, most advanced 150cc motorcycle money can currently buy. It’s powered by a liquid-cooled, 155cc single-cylinder engine that features VVT (Variable Valve Timing), technology that even more expensive motorcycles don’t come with.

Of course, it’s also a thrilling handler and manages to do all this while still returning impressive fuel-efficiency figures. Last year, Yamaha updated the R15 V3.0 with a new color scheme and dual-channel ABS. There’s very little fault that we can find  on this bike, as long as you are willing to live with its committed ergonomics. If you live, breathe and sleep MotoGP, you’ve just gotta have the R15; it will make you feel like one of your heroes. And that is why it was a no-brainer when being considered for this list.

The KTM 125 Duke is the most affordable motorcycle in the Austrian manufacturer’s two-wheeler stable. At its current price point and in comparison to the other motorcycles on this list, it is a rather expensive proposition. However, that’s because this little KTM is exactly the same motorcycle as the previous-gen 200 Duke, just less powerful. It has the exact same cycle parts, bodywork and features, all of which is pretty premium stuff. This means you get those snazzy alloys, a WP upside-down fork, very sharp disc brakes at either end and a proven trellis frame. It is for this reason and for the kit that it offers, that it has made it onto this list.

Despite its pricing, the 125 Duke proved to be a popular motorcycle in our market and even went on to become KTM India’s highest selling model.

The RTR 200 4V has always been a spectacular value-for-money proposition. It boasts of a powerful, oil-cooled, four-valve engine and some segment first features. With its recent BS6 update, TVS also gave the Apache RTR 200 4V a facelift, and equipped it with TVS’ ‘Smart Xonnect' technology. This Bluetooth-pairable instrument cluster displays a plethora of information including lap times, top speed, incoming caller name and a lot more. A dedicated phone app also allows riders to track their ride telemetry and maximum lean angle achieved. How cool is that?

The features don’t stop there, TVS has fitted the Apache RTR 200 4V with Glide Through Technology (GTT). GTT uses the fuel-injection system to inject a small amount of fuel that allows the bike to smoothly crawl forward through congested roads without the need for throttle inputs, something along the lines of  the creep function in a car with auto transmission.

The TVS Apache RTR 200 4V has always been the most well-rounded motorcycle in the 200cc segment. The BS6 update saw the price go up by a fair bit (around Rs 10,000), but considering the long list of features it offers as standard, including a slipper clutch, this hike is justified.

The Pulsar RS200 is the company’s only full-faired motorcycle in its range. It has been around since 2014, and apart from updates to comply with changing emission norms, the RS200 has stayed largely the same. The RS200 was introduced as the faired version of the NS200; which, in turn, is Bajaj’s spin on a fun motorcycle produced by its Austrian counterpart, the KTM 200 Duke. However, the RS200 is more than just another motorcycle with a lot of bodywork. The bike has a completely different frame and suspension set-up compared to the KTM and is an impressive motorcycle in its own right. Underneath the fairing sits a 199.5cc motor paired to a six-speed gearbox. This liquid-cooled, four-valve, single-cylinder engine is similar to the KTM but uses a unique triple-spark-plug SOHC layout.