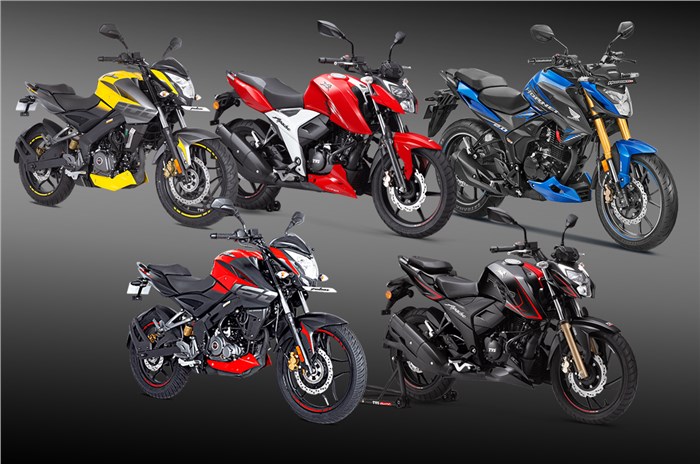 The Honda Hornet 2.0’s launch just a few days ago marked the Japanese manufacturer’s foray into the 160-200cc space in India. To see how it stacks up against its closest competition, we pit it against two of the most powerful 160cc motorcycles in our market and two popular, very similarly priced 200cc options.

The Hero Xtreme 200R also sits rather close to the Hornet 2.0 in terms of specifications, but its BS6-compliant iteration is yet to be revealed. This is why we haven’t taken the Xtreme 200R into consideration in this comparison.

How does the Hornet 2.0 compare on engines and power?

The new Hornet features a brand-new engine. However, its specifications – like cubic capacity and compression ratio – are identical to that of the Honda CB190R and CBF190R sold internationally. That said, the India-spec engine on the new Hornet have slightly higher peak power and torque figures than those bikes. Compared to the TVS Apache RTR 160 4V, the Hornet 2.0 is only slightly more powerful, while the Honda’s power output is identical to that of the Pulsar NS160. However, the Hornet 2.0 produces 1.5Nm more torque than the Pulsar. It also has another advantage – its weight. The NS160 weighs 9kg more than the Hornet 2.0 and so, like you can see from the table above, there is a noticeable difference in their power-to-weight ratios.

However, in comparison to its 200cc rivals, it is a different story. The Apache RTR 200 4V and the Pulsar NS 200 make more power and torque – the NS200 makes a whole 7.3hp more. The two bikes also weigh more than the Hornet 2.0, however, the difference isn’t big enough to warrant a loss in the power-to-weight ratios.

The Hornet 2.0 is also at a disadvantage when it comes to how technologically advanced the engine is. It’s the only one here that employs an air-cooled engine. All its rivals use either oil-cooling or liquid-cooling and all four also use four-valve heads.

How does the Hornet 2.0 compare on size?

Where the Hornet 2.0 does have a bit of an upper hand on paper is with its chassis. The Hornet 2.0 does not use the same frame as the Hornet 160R, and instead uses a brand new chassis for India. What’s impressive is that the new Hornet is equipped with a USD fork, unlike its rivals that all come fitted with more conventional telescopic units. At the rear, all five bikes use a monoshock suspension. Like we mentioned earlier, the Hornet 2.0 is also the lightest motorcycle here.

Apart from the suspension, the Hornet 2.0 also boasts of the second largest front disc here – only the NS200 has a bigger front disc. On the flip side, the Honda’s rear disc is one of the smallest units here, only larger than the RTR 160 4V’s.

Honda has equipped the Hornet 2.0 with rather wide tyres – they’re the widest ones here and this should translate to improved cornering stability. Interestingly, the fuel capacity on all five motorcycles compared here is the same 12 litres.

How does the Hornet 2.0 compare on features?

These entry level sport-naked motorcycles also boast of some modern features. For instance, all the lights on the Hornet 2.0 are illuminated by LEDs. Apart from that, the new Hornet also gets a digital instrument cluster that can be adjusted for five levels of brightness.

In comparison, the two TVS motorcycles boast of a more comprehensive list of features. Both the Apaches are equipped with TVS’ Glide Through Technology (GTT). This feature uses the fuel-injection system to inject a small amount of fuel into the engine that allows the bike to smoothly crawl forward through congested roads, without the need for throttle inputs. Meanwhile, the RTR 200 4V also comes with TVS’ ‘Smart Xonnect’ technology. This Bluetooth-pairable instrument cluster displays a plethora of information including lap times, top speed, incoming caller name and a lot more. A dedicated phone app also allows riders to track their ride telemetry and maximum lean angle achieved. The Apache RTR 200 4V is also the only bike here that offers dual-channel ABS – the other four come with a single-channel system.

Like we said above, the Pulsar NS160 and NS200 have not received a major update in a long time and offer almost no fancy, modern features.

Which bike has the freshest design?

The Hornet 2.0 may be very similar to the CB190R mechanically, but it’s quite different when it comes to the design. It carries the sharp design from the CB Hornet 160R, albeit, now in a bolder and more aggressive tone. The Hornet 2.0 features a new headlight and an X-shaped tail-light – a signature design carried forward from its predecessor. Honda has also added some more intricate design elements like a tank-mounted ignition key slot and faux air vents below the pillion seat, both of which give the bike a unique and modern stance.

The two TVS motorcycles here also feature fresh styling. In their recent transition to BS6, the RTR 160 4V and RTR 180 4V gained a new headlight design and some more minor tweaks that lend it a more aggressive stance. There's also some attention to detail in the new chequered flag graphics on the top of the fuel tank and in the knee recesses, as well as in the dual-tone-finish seat.

The two Pulsars, meanwhile, haven’t received a significant update in a very long time. That said, despite their age, the Pulsars don’t look outdated and their aggressive styling allows it to fit right in with its rivals.

How does the Hornet 2.0 compare on price?

The Hornet 2.0 is one of the sportiest entry-level machines that Honda has introduced in a long time. At its Rs 1.27 lakh price point, it comes uncomfortably close to its more-powerful 200cc rivals. However, its performance is closer to that of the smaller, more-affordable 160cc motorcycles. Having said that, on paper, it does come equipped with a segment-first USD fork and looks like it should deliver punchy urban performance and good riding dynamics. While it may not be at the top of this comparison, specifications don’t paint the full picture and a road test should give us a better idea of how this updated Hornet stacks up against the rest of the 160-200cc segment in India.