The Tata Nexon gets a new look, added features and a more powerful 120hp petrol engine. We see how it stacks up against the other trendy, feature-rich and 120hp compact SUV, the Hyundai Venue. 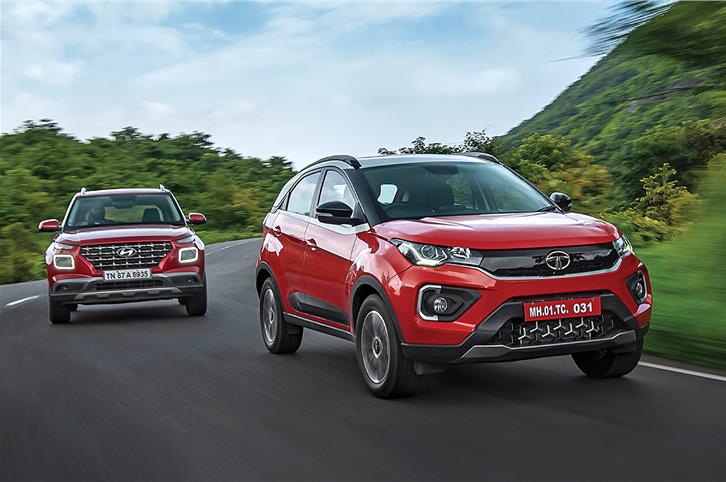 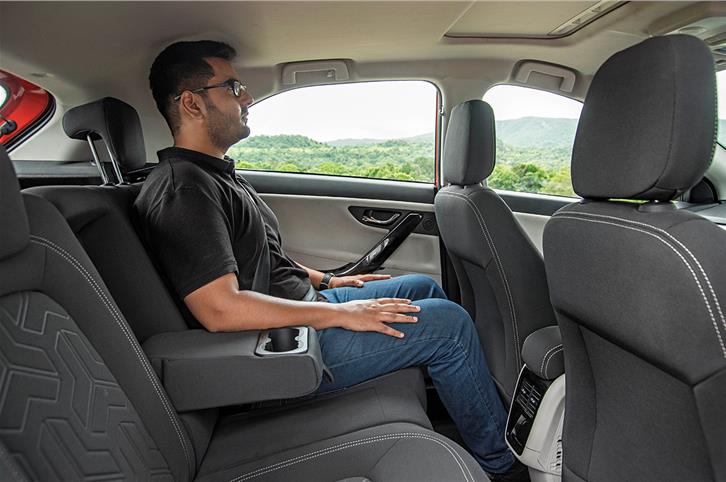 The Tata is surprisingly roomy for a compact SUV. Rear seat is really comfy too. 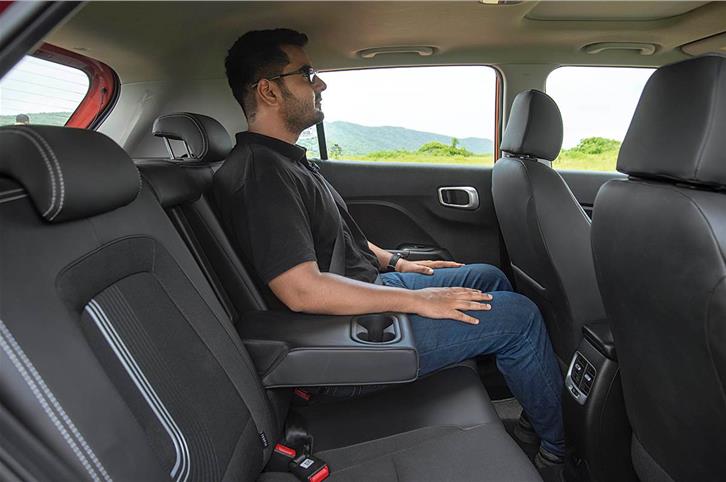 Venue offers only adequate room at the back but large windows help feeling of space.

You could think of this comparison as a rematch of sorts. The Tata Nexon and Hyundai Venue have already faced off multiple times before, and in the last shootout of petrol-manuals that also featured the Mahindra XUV300 and Ford EcoSport, it was the Korean SUV that took top honours. We found the Nexon stylish, competent and good value, but also noted: “it’s got an equipment list that falls shy of the others, a lower level of interior fit and finish and a petrol engine that needs to be a lot smoother.” With this 2020 update, the Nexon promises to make amends. The features list has swelled – with the inclusion of a sunroof, connected tech and digital instrument cluster – the interior has been jazzed up and its 1.2-litre Revotron engine has also been reworked, with power now up to 120hp.

How it all comes together – and if the package is good enough to better the Venue, the current segment benchmark – is what we’re keen to know.

I’ll leave it to you to decide on which is the better-looking compact SUV, but you have to hand it to Tata for going the distance with this facelift. The Nexon’s front end is all new, with certain elements, like the higher-set bonnet, necessitated by the latest pedestrian norms. The curvy headlights of old have made way for more angular units, the ‘smiling’ grille has been replaced by a chunkier and more upright arrangement, and even the bumper, replete with a scuff plate, is new. That tri-arrow detailing on the lower mesh does look very Mercedes logo-like, doesn’t it?

Blackened A- and C-pillars and new-design alloy wheels are other details on the latest Nexon, while the tail end, with its Union Jack-like detailing on the lights and chunkier bumper, complete the makeover. To my eyes, there’s a mismatch between the new squared-out front and the rounded tail, but all in all, the Nexon does look more butch than before.

‘Butch’ is not a word you’d use to describe the Venue’s design. Sure, the Hyundai’s got the more traditional, upright SUV shape and even well-defined wheel arches, but it doesn’t quite have the physical presence of a Nexon. The two models are near identical in length, height and wheelbase, but the Nexon is significantly wider and that makes all the difference. Still, Hyundai’s cascading grille, the split headlamp and that square LED DRL surround for the main headlight cluster mean the Venue won’t be lost in a crowd.

The changes inside the Tata aren’t as far-reaching as those on the outside, with the robust-looking dash and its floating touchscreen carried over. However, the move to lighter colours, a gloss finish on the dash (it gets the tri-arrow pattern too) and the sporty new flat-bottom steering wheel have done their bit to enhance the cabin ambience. Fit and finish sees an improvement too and is actually pretty good, even if it’s still not quite at Hyundai’s level. Tata has also acted on customer feedback to include a sunroof, but the new digital instrument cluster isn’t well executed. A reflective screen makes it hard to read the digital speed readout and the bar-like tacho at the side isn’t easy to refer to either. A dedicated bay for your smartphone is something that should have been thought of too. 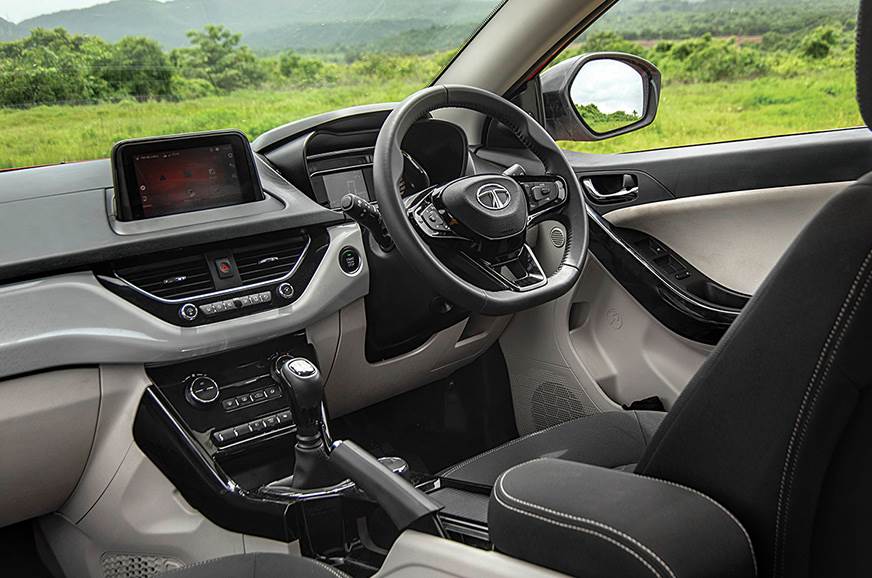 Lighter colours and better fit-finish have improved the look and feel of things inside the Nexon cabin.

You’ll be at ease far sooner inside a Venue. The relatively upright pillars equal great visibility, the touchscreen and chunky audio and air-con controls are in easy reach, and even storage spaces are well thought out. Overall quality is good, but some more colour would uplift the cabin experience. Interestingly, Hyundai has introduced a new ‘Sport’ trim for the Venue that gets red accents on the air-con knobs and red stitching on the seats, but this configuration isn’t available with the 1.0 T-GDi with a manual gearbox. 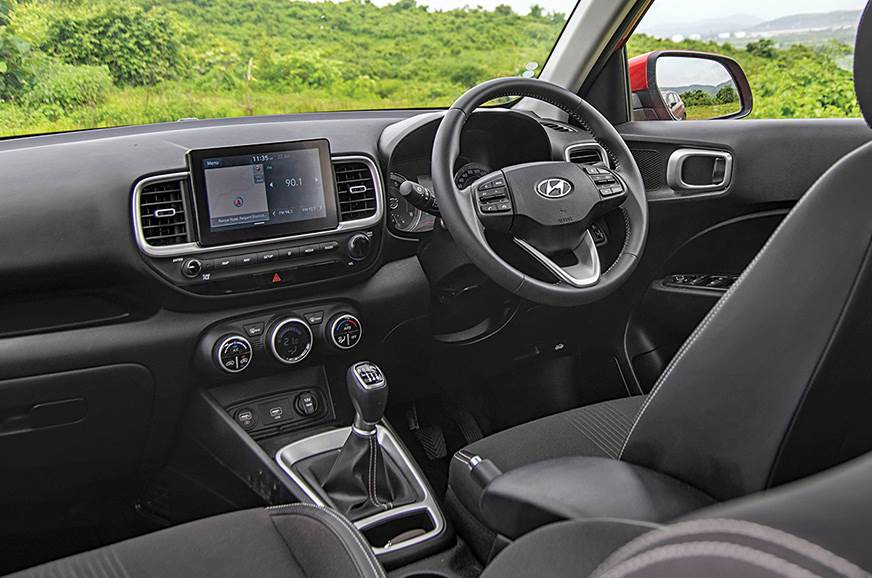 Good visibility and user-friendly dashboard put drivers at immediate ease in the Venue.

If there’s an area where the Hyundai trails, it’s cabin space. Drivers will find themselves sat much closer to their co-driver in a Venue and it’s the Nexon that has the clear edge on rear-seat comfort too. The Tata offers more legroom, is more accommodating for three at the back and, as an added plus, also has the more supportive seat. Also, while the mechanism for the new sunroof has lowered the headlining, Tata’s engineers have smartly carved out enough headroom at the back.

There’s nothing between the two SUVs on luggage room, with both offering 350 litres of space. 60:40 split rear seats that fold down also help enhance storage space, should the need arise.

Both SUVs in their top-spec petrol-manual trims get all the tech and comfort features you’d want. Auto headlights, sunroofs, auto climate control, rear air-con vents, keyless entry and go, and cruise control are features you’ll find on both. The Nexon is the only one with driving modes, a digital instrument cluster and rain-sensing wipers. Also unique to the Tata is an ‘Xpress Cool’ feature that lowers all windows to release trapped hot air and maximise air conditioning, at the touch of a button; handy when your car’s been parked out in the sun all day. 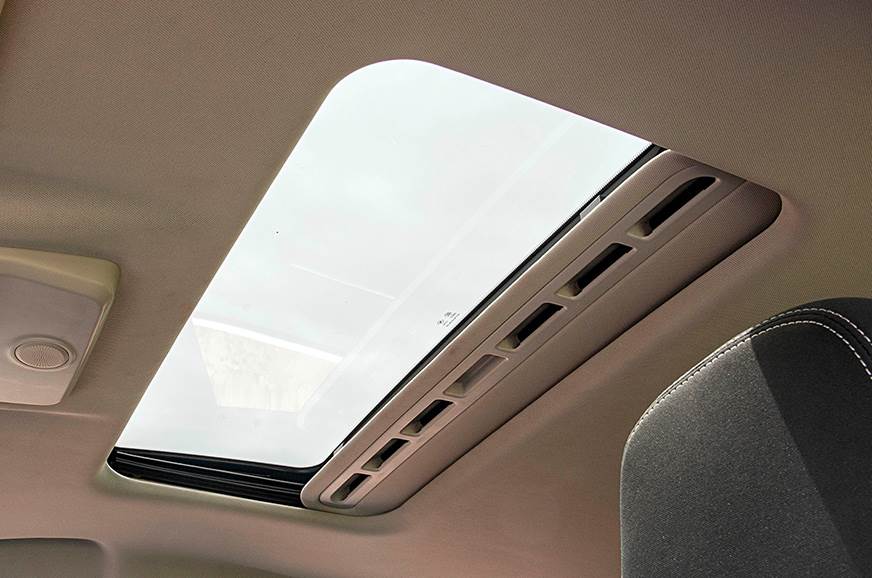 Sunroof is a big addition on the Nexon.

A wireless phone charger is a feature exclusive to the Venue, and the Hyundai also gets you a better touchscreen; the 8.0-inch screen is not only larger than the Nexon’s 7.0-inch unit but more responsive too. On that subject, while the Venue was India’s first ‘connected car’, similar tech has made its way into the Nexon too. The new ‘iRA’ system lets you remotely keep an eye on your car’s movement, among other functions. Sadly, we can’t comment on the efficacy of the system, as it wasn’t activated on our Nexon test vehicle. 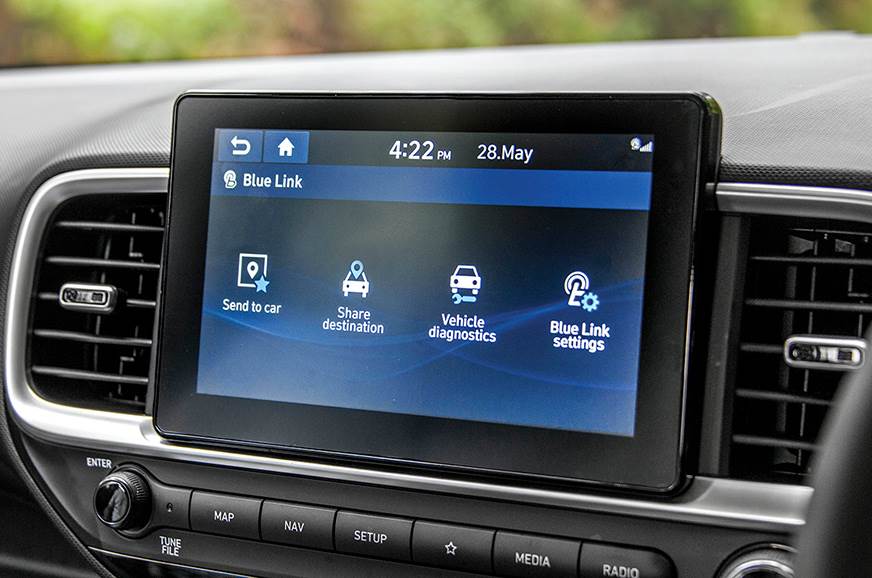 Venue has the better touchscreen.

In the all-important matter of safety, the Nexon wears its Global NCAP 5-star crash-test rating as a badge of honour. The Venue hasn’t been put through the test as yet, but does have a bragging right of its own, with six airbags to the Nexon’s two. Impressively, both models get ESC, tyre pressure monitoring systems and ISOFIX child seat mounts.

Heart of the matter

The added features are all well and good, but if there’s one thing that the Nexon needed more than anything, it was a spicier petrol engine. The Nexon’s 1.2-litre, three-cylinder, Revotron turbo-petrol always felt like a work in progress, with inconsistent power delivery and an all-round lack of oomph being downers. Things have improved with this update, but not to the extent they could have. While drivability is better than before, there is still some hesitation at low speeds, and the feeling that the engine isn’t being allowed to breathe freely. You have to work around the engine’s meek bottom end and it doesn’t help that the clutch isn’t progressive.

Things smoothen out in the mid-range and performance is reasonable, but the flat build-up of power doesn’t excite. Of the driving modes, City is fine in town and Eco is best used when you need to conserve fuel, but even in Sport, you don’t feel the extra 10 horses that this upgrade has freed. 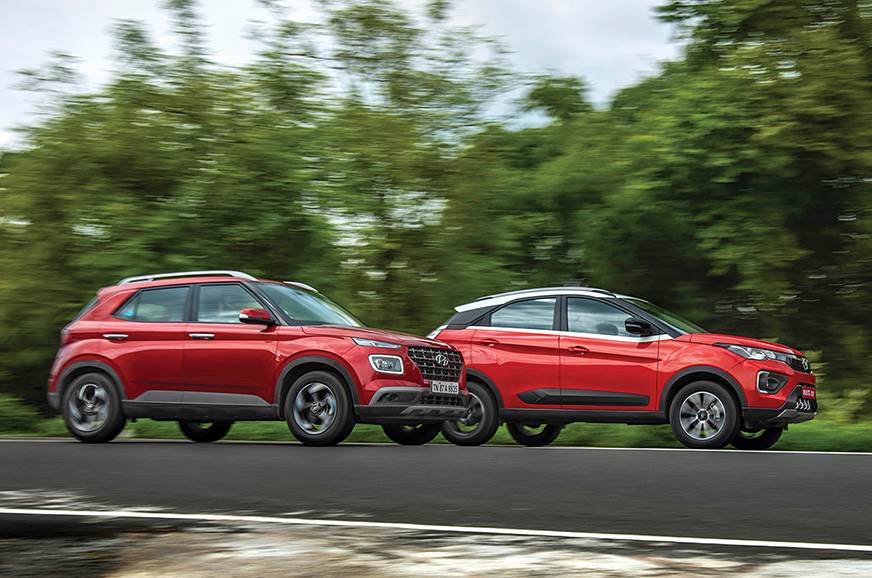 In comparison, Hyundai’s 1.0-litre, direct-injection, three-cylinder turbo unit feels more complete. Despite a displacement disadvantage, it pushes out an identical 120hp and marginally more torque at 172Nm. Yes, the Venue isn’t particularly lively at really low engine speeds either, but it’s always smooth, and the light clutch and slick gearbox make it that crucial bit easier to maintain progress in stop-start conditions. Cross 2,000rpm and you’ll see a different side of the Venue. The engine is energetic in the mid-range and the reasonably strong pull is quite entertaining. Even the thrum from the three-cylinder engine is sporty. The Venue is, unsurprisingly, quicker through the gears and also to the ton.

To recap other aspects of the driving experience, it’s the Nexon that feels like the more rugged SUV, courtesy a suspension that seems built to take a beating. Sharp edges and potholes thud through loudly at low speeds, but the Tata feels poised and sure-footed at higher speeds. A slick and well-weighted steering and smooth cornering manners are also positives unchanged from before.

The Venue, on the other hand, is the friendlier model. The light steering and good visibility make it just as easy to drive as a tall boy hatchback. It’s pleasant in the corners, too, though you should know there’s an un-Hyundai-like firmness to the suspension setup, which means the ride can feel busy on an uneven surface.

With the latest update, Tata has maintained all that we like about the Nexon and addressed some, if not all, of its weak points. The relatively tough demeanour, roomy cabin and fashionable looks remain the chief reasons to buy the Tata. Also, opting for a Nexon today no longer means missing out on the latest equipment, though at Rs 10.6 lakh (ex-showroom, Delhi) the range-topping variant doesn’t quite play the value card. There is still some way to go in overall finesse, but where the Nexon remains on the back foot is with its powertrain. The engine improvements are incremental and, sadly, uplift the experience by only so much. 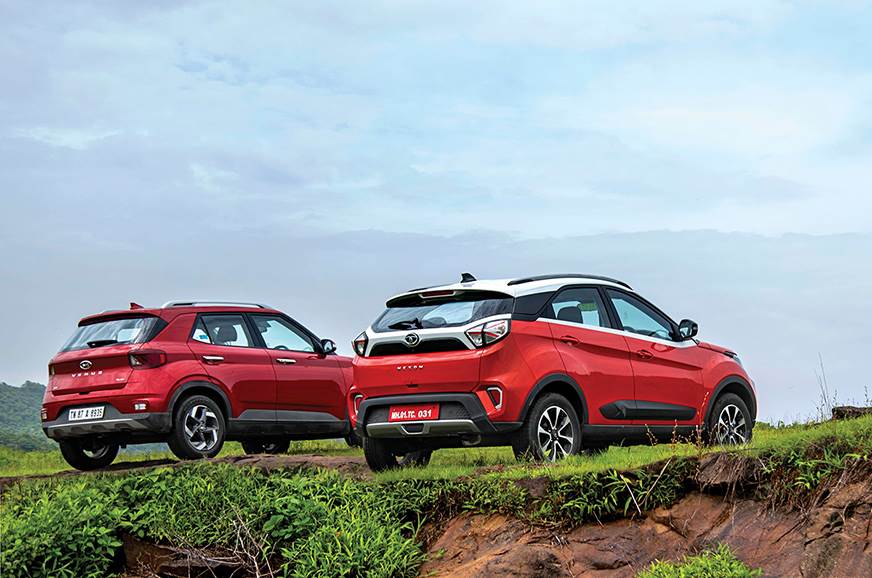 The Venue isn’t the pick of the compact SUVs if space is a deciding factor, and at Rs 10.85 lakh it’s the pricier one too. However, the extra money does get you the more sophisticated package. The Venue is big on features, but it’s the more likeable engine and general ease of use that really win it for the Hyundai.

So, the formula of a well-equipped urban SUV continues to work for the Venue. Question is, could its cousin, the Kia Sonet, build on the script and better it? That’s something we’re just as eager to find out.