The Jeep Compass and Tata Harrier share their diesel engines but use different automatic transmissions. We tell you which one does the better job of the ingredients and which is the SUV for you. 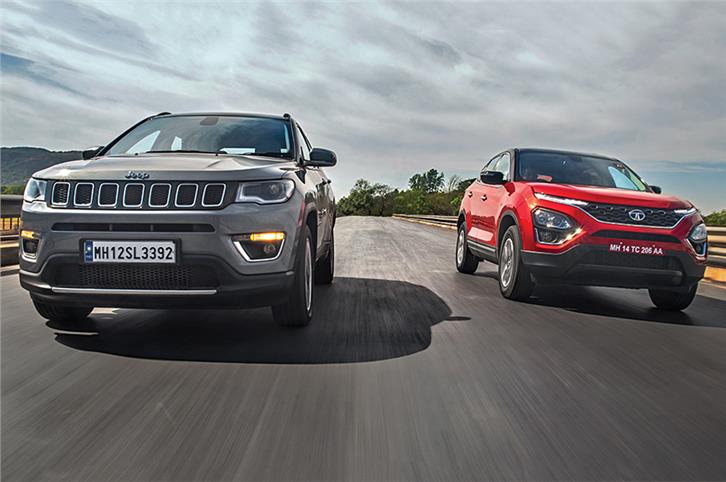 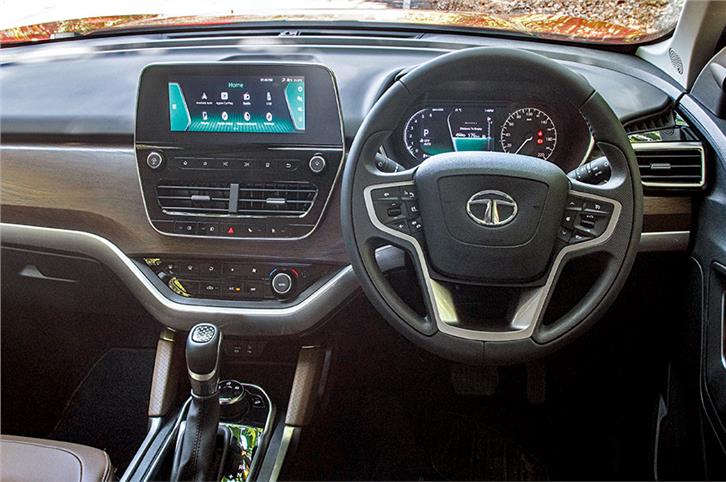 Harrier gives the feeling of being in a big, premium SUV. It’s not perfect but much of what you see is well finished. 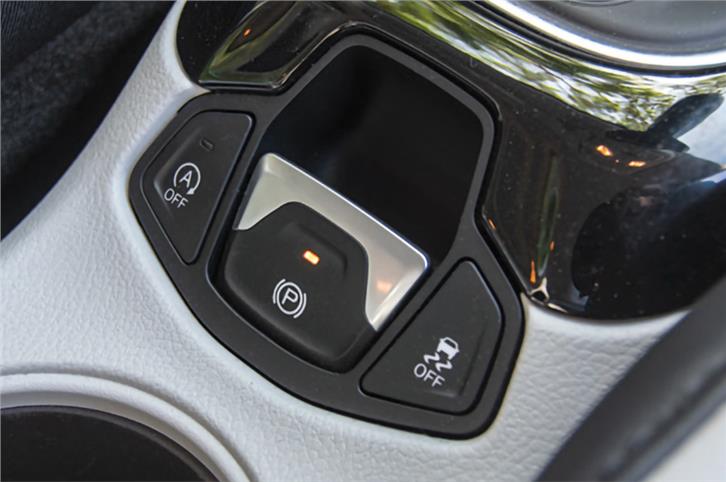 Electric parking brake is a premium feature on Compass.

While our review confirmed that the new automatic version as the best Tata Harrier to buy, what we’re keen to know is how good it is in the larger universe of diesel-automatic SUVs. Our benchmark comes in the form of the Jeep Compass that, incidentally, received a diesel-automatic option in the past few months. This isn’t an apple to apples comparison, though. The Compass operates in a higher price band with prices for diesel-auto versions starting a full Rs 2 lakh above where the Harrier auto tops off. The fully loaded Compass Limited Plus featured here adds a further Rs 3 lakh to the difference. Then again, the Tata and Jeep are powered by the same engine – Fiat’s now-BS6-compliant Multijet 2.0-litre diesel – and in the same 170hp-odd state of tune, so there’s merit in seeing how the two SUVs compare. Could the Harrier make the Compass feel like an unnecessary extravagance? Or can the Jeep lure you enough to part with substantially more money?

As good as the BS4-spec Harrier was, its 140hp engine always came across as a bit restrained, as if it had more to give but wasn’t allowed to. The good news is that that’s not a feeling you get on the updated BS6 Harrier. Power is up a substantial 30hp, and you experience the added go, especially on the open road. The Hyundai-sourced 6-speed torque converter automatic gearbox that has the job of channelling that power to the Harrier’s front wheels, perhaps deserves even more appreciation. 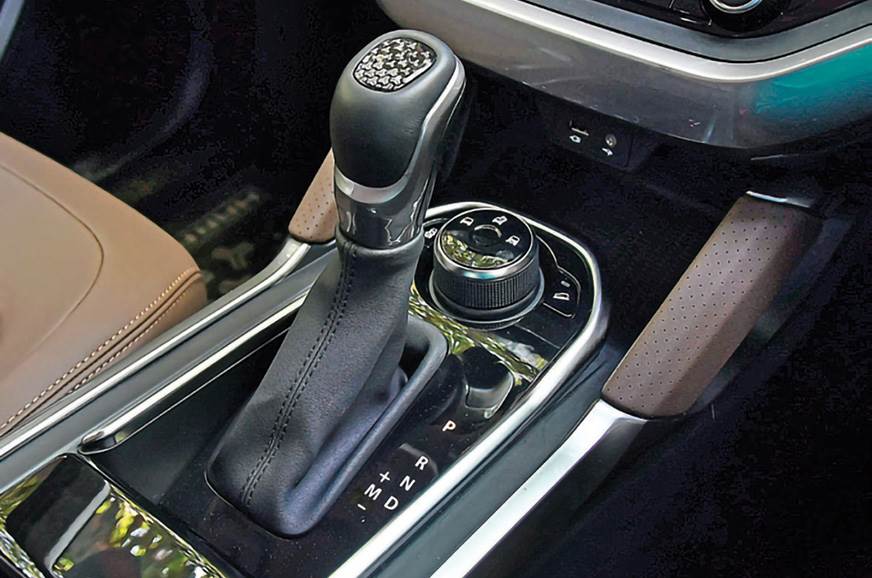 The gearbox is smooth through gearshifts and goes about its business in an unobtrusive way, just as you’d like it. It responds well to part-throttle inputs and is even timely in its shifts when you adopt a more aggressive driving style. It’s only when you mash down on the Harrier’s accelerator that there’s a bit of a delay before the electronics pick the right gear. There is, however, fun to be had shuffling through the ratios via the gear lever in manual mode. Again, responses are sufficiently quick, even if the slow-to-react gear indicator readout on the MID might suggest otherwise. 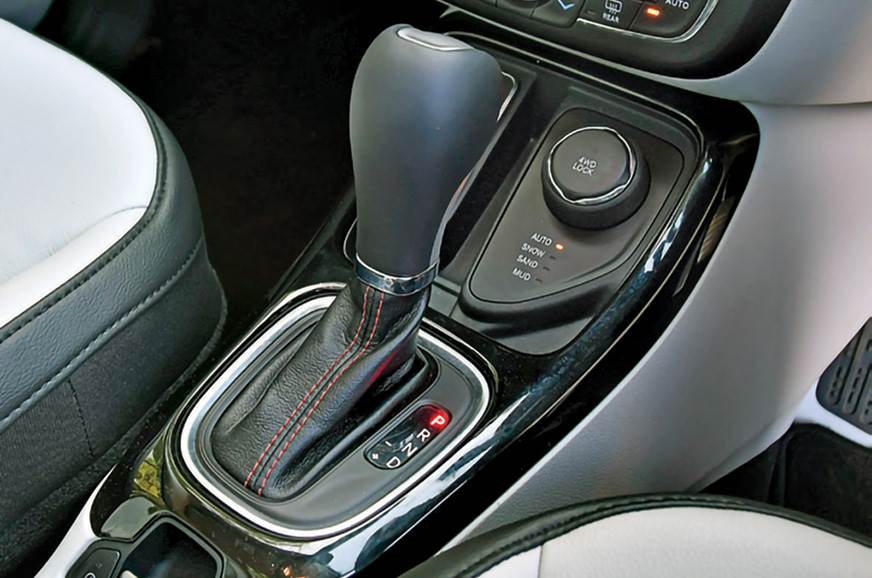 Drive the two SUVs back to back and you’ll make a big revelation – the Harrier’s 6-speed unit actually gets more out of the FCA engine than the Compass’ 9-speed auto. Yes the 9-speed torque converter is smooth and goes through the gears gracefully, and yes, even in mundane traffic you’ll be in the right gear for the speed. It’s just that the gearbox is a bit too easy-going for the Compass’ good. You experience this when you want to overtake on the highway or are hot-footing it on a twisty road. Tuned to keep the engine in the efficient 2,000-3,000rpm range, the gearbox only goes down multiple gears when you make your intent clear by pressing down heavy on the throttle pedal. The Compass gearbox simply isn’t as reactive to changes in throttle position as the Harrier’s unit. On a good driving route, you’ll find yourself reaching for the Compass’ gear lever to take manual control of shifts more in impatience than for the fun of it.

Those familiar with the explosive mid-range of the Compass’ old BS4-spec diesel unit will also have to come to terms with the more linear and measured build of power on the BS6 model. This, and the Harrier’s power upgrade, has actually reduced the performance edge the Jeep had over the Tata. In our preliminary acceleration runs, the Tata did the 0-100kph sprint in 11.58sec to the Compass’ 11.4sec time.

It’s rather close in terms of engine refinement as well. The BS6 engine upgrade has dramatically brought down noise levels on both models, though it’s the Compass with the marginally quieter idle.

*Performance figures not to Autocar standards

So it’s the Harrier with the better gearbox, but can it cause as much of an upset when talking of other elements of the driving experience? The short answer is no.

This is a large SUV that feels its size in town and at low speeds due to its relatively heavy hydraulic steering. The steering’s heft does give confidence when cruising out on the highway, but the inconsistent feel off-centre, kickback on big bumps, and even torque steer on hard acceleration take much away from the experience. The Harrier also tends to follow the contours of the road calling for a firm hand on the wheel at all times. 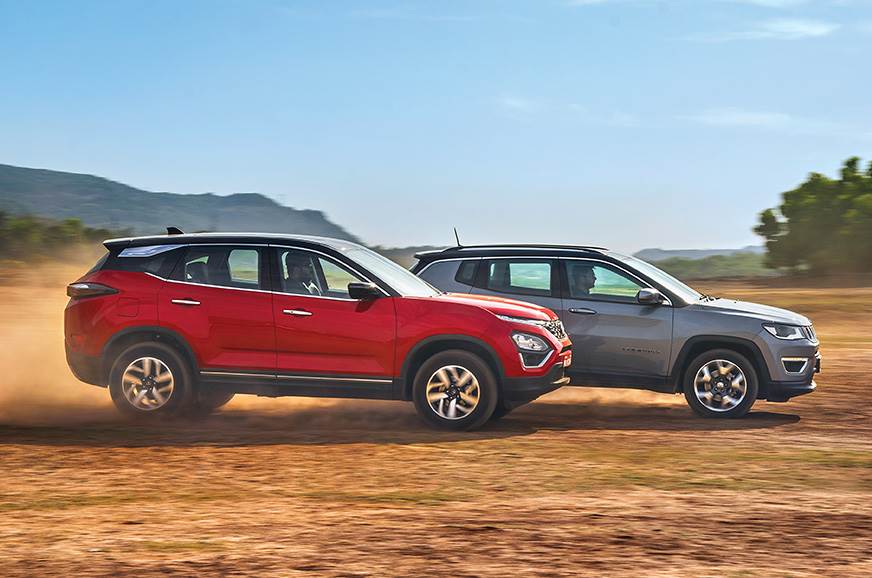 In comparison, the Compass comes across as a far more accomplished package. Its electric steering, for one, is beautifully tuned – light and easy to twirl in town, yet weighty and feelsome at higher speeds – and the keen handling will also get your vote. Then there’s the Compass’ all independent suspension (the Harrier uses a simpler torsion beam at the rear) which is just brilliant. Sure, the Harrier is good on broken tarmac and can take quite a beating, but the Compass is at a whole different level. Bump absorption is excellent, it’s unruffled by potholes taken at speed, and the overall impression is of an SUV that’s built for our bombed-out roads. Recent tweaks to the damping have also addressed much of the low-speed firmness earlier Compass models were known for. The Harrier feels a bit stiff-kneed in comparison, doesn’t ride as flat as the Jeep, and also lets in more road and wind noise. The Compass, which is the only one here with rear disc brakes, is also the more confident SUV under braking. Forget the Harrier, the Jeep delivers a driving experience superior to many cars and SUVs higher up the price ladder. It’s such a pity that the gearbox isn’t game to play, though. 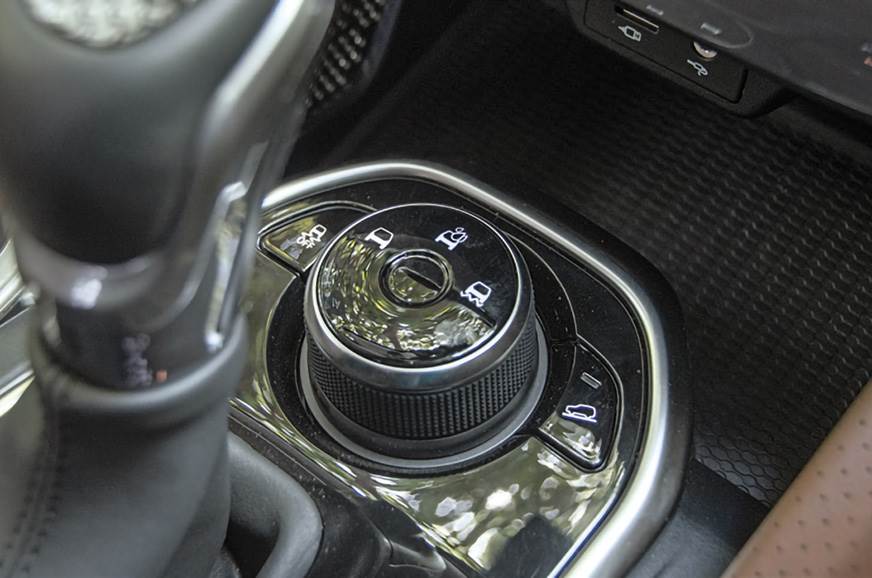 Harrier is front-wheel-drive only but gets off-road modes.

Off-road prowess might not be a decider for most buyers, but here too the Compass diesel-auto has the advantage with standard-fit all-wheel drive that channels power to the rear axle when needed. Selectable off-road modes and 4x4 lock are also included. The Harrier gets hill-descent control and a Land Rover-like three-mode Terrain Response system that controls ESP settings, but there’s only so far you’d want to venture in what is a front-wheel-drive SUV. 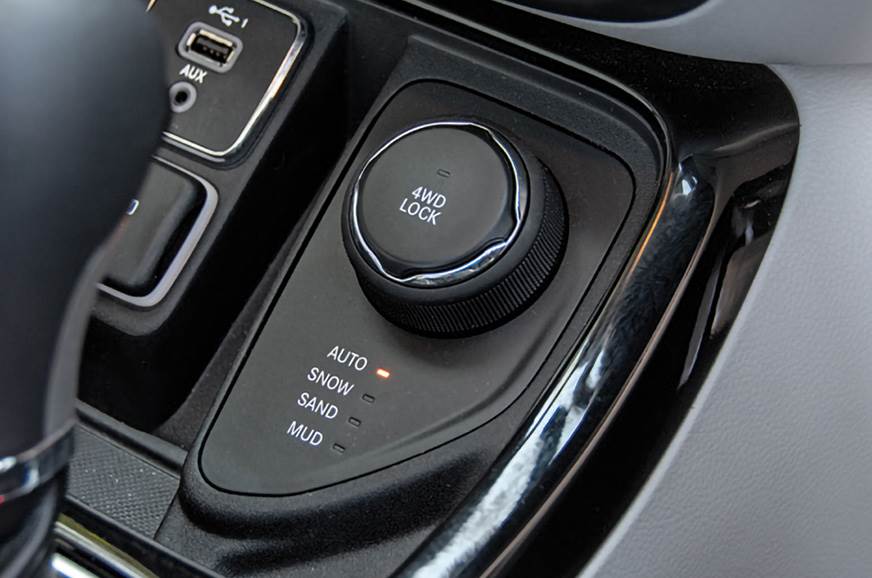 You’ve seen these SUVs before so you’re familiar with the Harrier’s concept-car-for-the-road look and the Compass’ more traditional, broad-shouldered stance. And you’ll also know that the near-4.6m-long Harrier is a whole lot larger than the near 4.4m-long Compass. That big difference in size plays out on the inside with the Harrier trouncing the Compass on cabin room. Rear-seat passengers won’t really feel cooped-in in a Compass, but it is a, well, cosier setting. Legroom is adequate but the seat is best suited to two passengers and taller passengers might also find headroom limited. The upright rear backrest doesn’t do the Compass any favours either. The rear section of the Harrier’s cabin is far more inviting. The seat is supportive, there’s enough width for three to sit in comfort, and you also get loads of legroom. The large windows and new panoramic sunroof only add to the feeling of space. Price-to-size is a metric that the Harrier continues to ace. 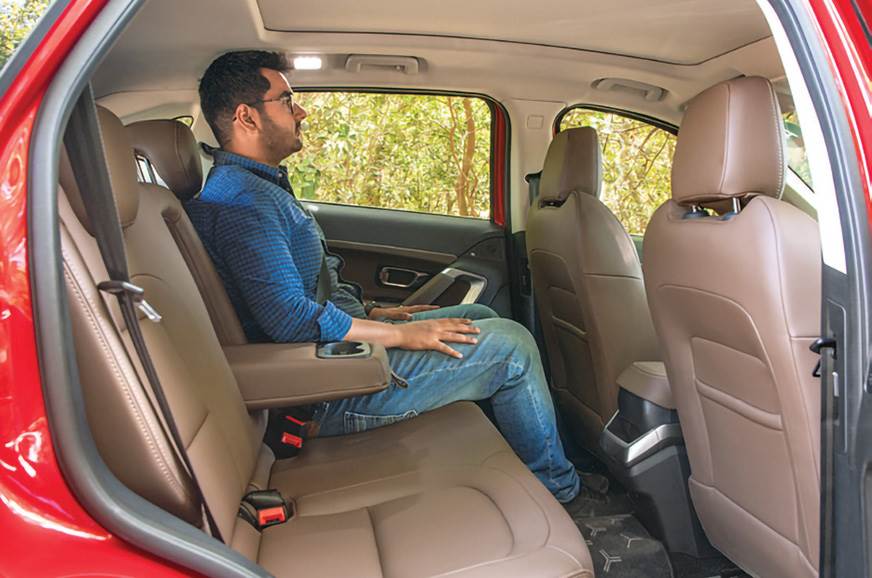 Rear section of Harrier cabin is big on space and comfort.

Up front, the Harrier’s relatively high seating also gives drivers the feeling of commanding something substantial. Equally importantly, you also get the feeling of being in something substantially expensive. Sure, there are a fair few hard plastics scattered across the cabin but the faux wood on the sleek dash looks convincing, the door handles are leather-wrapped, and the now-tightened panel fit has also done much to enhance the cabin ambience. A slicker touchscreen would be high up on our wishlist, however. 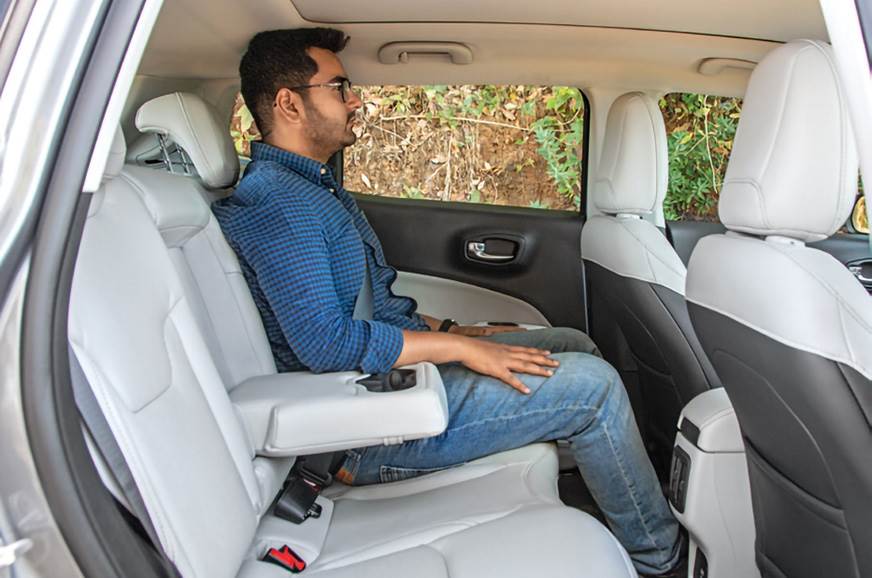 Compass has the smaller cabin. Rear seat is best for two.

At first glance, the Compass’ cabin can seem quite ordinary – blame the plain-looking dashboard for this – but what charms you here is quality. The thunk on door shut and the following clack of the military-grade door locks are sounds you won’t tire of, even years into ownership. There’s an all-encompassing, built-to-last feel on the inside, and everything just feels tightly screwed together. The chunky steering is great to hold, while the padded materials used on much of the dash are also great to the touch. You don’t sit as high up as you would in the Harrier but frontal visibility is good, and it’s easy to find a comfortable driving position too. 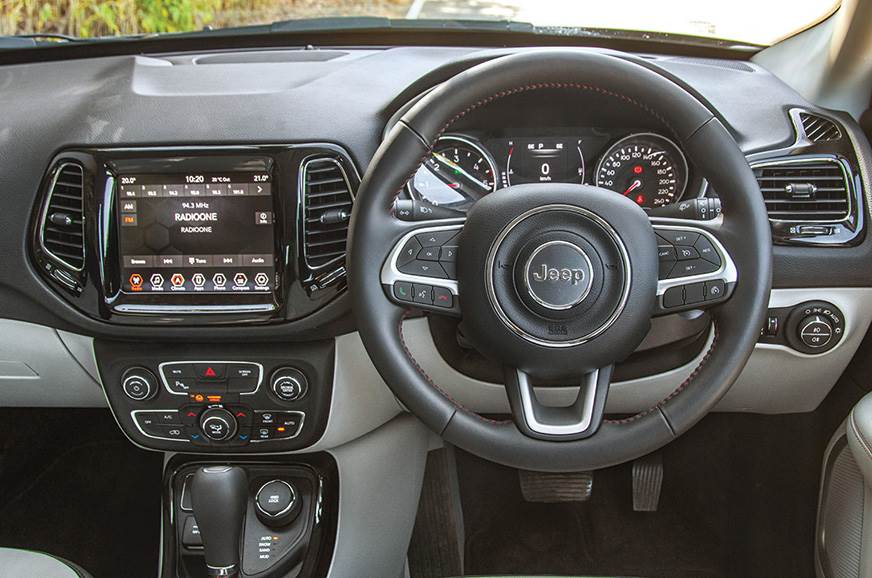 While the dashboard might look a bit plain, the built-to-last feel across the Compass cabin will win you over.

The very first iterations of both the Harrier and Compass drew flak for some missing features. The story is quite different today, however. Both models in their top-spec avatars are quite evenly matched and get features like panoramic sunroofs and powered driver’s seats, while safety kits include six airbags and ESC. There are some differences in kit too. Where the Harrier sports a part-digital instrument cluster and has the larger touchscreen (8.8-inch vs the Compass’ 8.4-inch unit), the Jeep gets an electronic parking brake and offers the flexibility of dual-zone climate control. 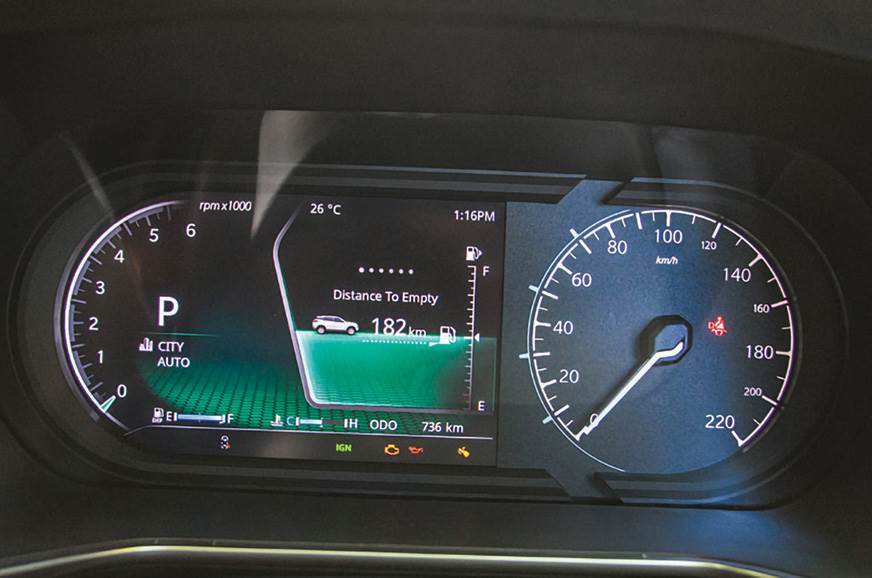 Digital tacho a cool bit on Harrier, but not easiest to read.

To Each His Own

Priced at Rs 24.99 lakh (ex-showroom, Delhi), the fully loaded Jeep Compass Limited Plus diesel-auto is an expensive proposition, particularly for an SUV of its size. And given the cabin space, it’s not the ideal fit for buyers with frequent use of the rear seat either. However, if you are a keen driver, the Compass has big appeal, humdrum auto gearbox notwithstanding. The excellent ride, slick handling, solid build and even off-road ability are what make the Compass special. It’s still a hard sell for the money, but if you are open to compromising on features you could get the same mechanical package in more affordable Longitude trim that costs Rs 21.96 lakh. 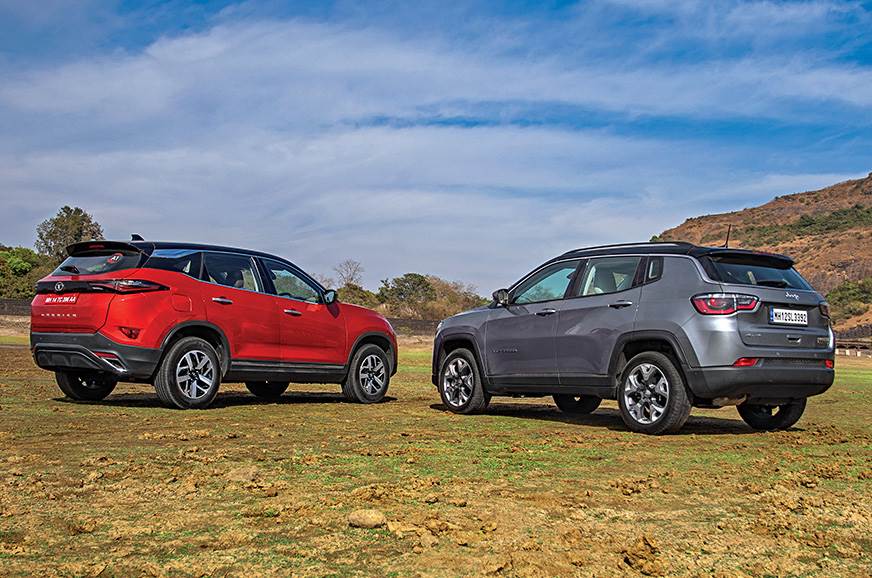 To say the Harrier is our pick merely for its lower price tag (Rs 20.25 lakh) would be doing injustice to what is Tata’s best SUV yet. The carmaker has done a great job with the Harrier auto’s drivetrain and the element of convenience only adds to the base SUV’s repertoire of talents. No doubt, there’s still room for improvement in the area of driving dynamics but it’s not a deal-breaker, by any stretch. A large SUV with a strong engine, a nice auto gearbox, and an attractive price tag. What’s not to like?