Bookings officially commenced on March 2 for Rs 25,000; new Creta is on display at Hyundai dealerships across the country. 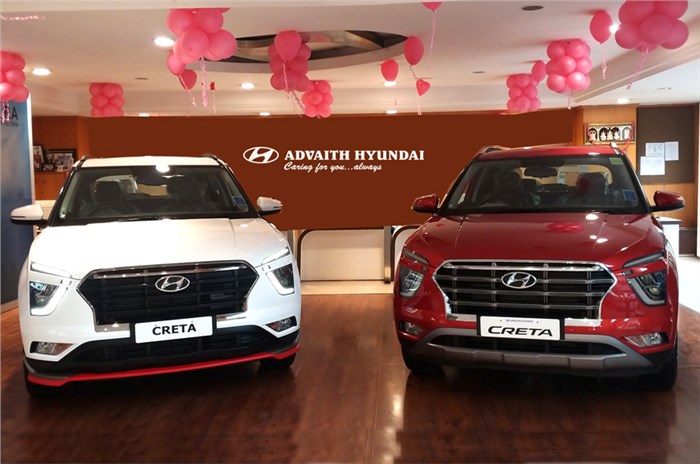 The all-new Hyundai Creta has received over 10,000 bookings, and this figure was achieved within a week of the carmaker opening bookings at its dealerships and on its website. Deliveries for models booked from March 2 onwards will commence with the Creta’s launch on March 17. Interestingly, Kia had reported 6,046 bookings on day one of its order books opening for the Seltos SUV last year. The new Creta will lock horns with the segment-leading Seltos, among a whole host of midsize SUVs.

As we’ve reported, the second generation of Hyundai’s midsize SUV will come with five engine-gearbox combinations, a bold design and a well-equipped cabin that’ll boast of some segment-leading features. While the Korean brand had revealed the interior and equipment that will be offered on the range-topping Creta variant when it had announced commencement of bookings, we already have exclusive details on the features that will be available with each variant. We also got new information that revealed the top-spec Creta SX(O) variant will come with all-black interiors, and confirmed that the Creta will get a more advanced version of Hyundai’s BlueLink in-car connectivity suite than the one available in the Venue and Elantra.

The new Creta will come be available in a total of 14 versions, including five trims and the aforementioned five engine-gearbox options. All three engines – the 115hp, 1.5-litre petrol; the 115hp, 1.5 diesel; and the 140hp, 1.4 turbo-petrol – are shared with the Kia Seltos, but unlike its cousin, the Creta doesn’t get the 1.4-litre turbo-petrol with a manual gearbox option. Despite the shared powertrains, the new Creta posts slightly higher ARAI mileage than its counterpart from Kia. More details on that are here.

The first unit of the new Creta had recently rolled off the production line at Hyundai’s Sriperumbudur plant in Tamil Nadu.