They might share engines and gearboxes, but it is the Hyundai that promises an edge in fuel economy. 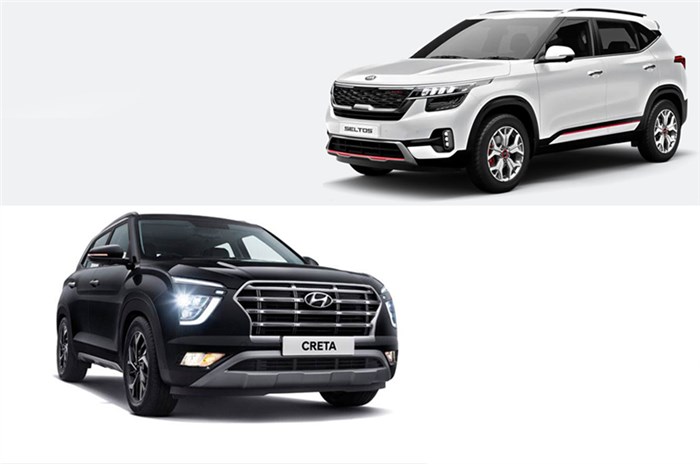 The second generation of Hyundai’s immensely successful Creta SUV will be launched in India on March 17. The upcoming SUV shares its five powertrain options with the Kia Seltos and will be sold in five trim levels – a total of 14 variants for buyers to choose from.

We have got our hands on the claimed fuel efficiency figures of the second-generation Hyundai Creta ahead of its launch and compared it with figures for its arch rival (and cousin) the Kia Seltos.

The new Creta with the 1.5-litre petrol engine will do a claimed 16.8kpl with the manual gearbox and 17.1kpl with the CVT automatic. Meanwhile, the new Creta in the 1.4-litre turbo-petrol DCT configuration is claimed to do 16.8kpl. As for the diesels, the Creta AT is said to do 21.4kpl while the manual manages 18.3kpl fuel efficiency.

When compared to the Seltos’ figures, the new Creta is certified with better fuel efficiency across all configurations. While detailed specifications are awaited, a marginally lower kerb weight and taller gearing could be responsible for the Creta's better numbers.

But just having higher fuel-efficiency figures won’t be enough for the Creta to reclaim its crown from the Seltos, which was the highest-selling UV in January with 15,000 units. Hyundai aims to one-up the Seltos by offering more equipment such as a panoramic sunroof, a 7.0-inch full-digital instrument cluster and an electronic parking brake – all of which are not available with the Seltos yet. The carmaker released interior images which confirmed some features that will be on offer when the new SUV is launched on March 17.

Bookings for the new Creta have been opened, with the booking amount set at Rs 25,000. Apart from the Seltos, the new Creta will also have to contend with other midsize SUVs in the Indian market like the MG Hector, Renault Duster and Nissan Kicks.