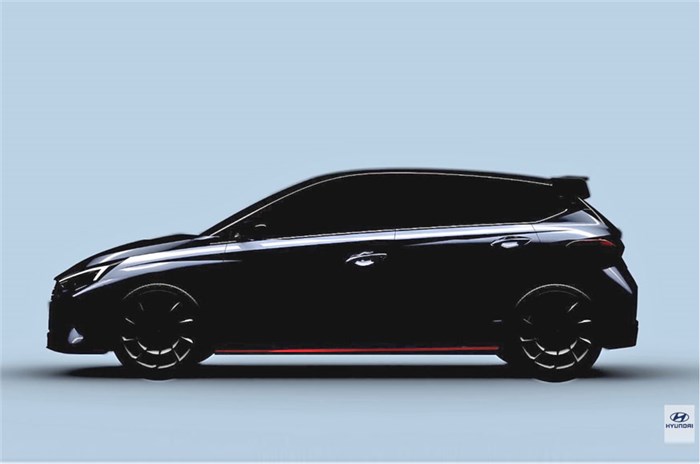 Hyundai has teased a sportier N derivative of the all-new i20 premium hatchback. Expected to debut later this year, the hot hatchback made a brief appearance in a video of the standard hatchback followed by the words ‘to be continued’.

What’s evident from the teaser is that the i20 N will wear larger alloy wheels, along with featuring a prominent roof-mounted spoiler and sporty side sills with red accents. It’s also safe to expect a different bumper design on both ends to give it a more aggressive look to go with its character.

Expect the cabin to also feature sporty touches, while still carrying over most of the bits from the standard hatchback.

On the mechanical front, the i20 N is expected to get lower to the ground, along with featuring stiffer suspension, uprated brakes and tweaks to the steering ratio to enhance handling. Under the hood, the N is expected to get a larger, more powerful engine as compared to the standard hatchback. The engine in question is likely to be a 1.6-litre direct-injection turbo-petrol unit with output in the region of 200hp. Test mules have hinted at a 6-speed manual gearbox being paired with the engine.

For India, Hyundai recently upgraded the current petrol i20 to meet BS6 emission norms, with the all-new model expected to arrive later this year. The carmaker is also considering bringing its N performance brand to India, with the company having shown the pre-facelift i30 Fastback N at the 2020 Auto Expo. The i30 N is expected to be the first N model to arrive in our country, but it remain to be seen if the new i20 N will also be considered.