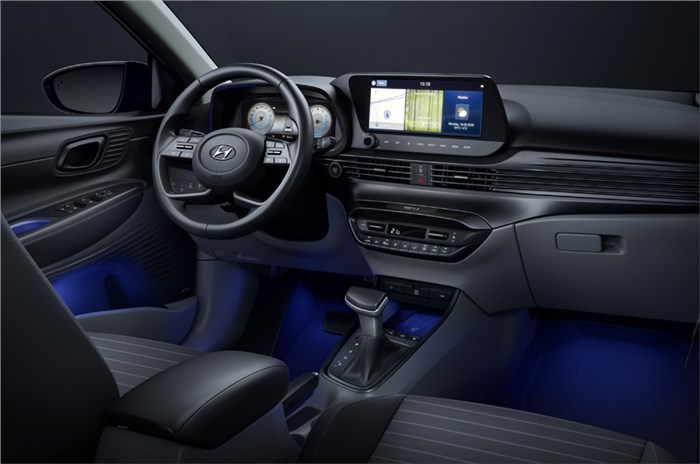 Ahead of the premium hatchback’s global premier at next week’s Geneva motor show, Hyundai has released an image of the all-new i20’s interior. Exterior images of the new-gen hatchback were released last week, which revealed its striking new design.

While Hyundai had teased the new i20’s interior by releasing a sketch, the image now confirms details about the upcoming hatchback’s interior. The new i20’s four-spoke, leather-wrapped steering wheel is near-identical to that of the India-bound new Creta SUV, and it also features buttons for the audio system, cruise control and the full-digital instrument cluster. The 10.25-inch digital cluster changes colour, depending on the selected drive mode – it turns blue for Normal, green for Eco, and orange for Sport.

The centre console is dominated by a large 10.25-inch infotainment touchscreen that gets features like Apple CarPlay and Android Auto compatibility, Hyundai’s BlueLink connectivity suite and Hyundai Live services, which includes real-time traffic updates, weather data and more. The layered dashboard is broken up by horizontal blades that run horizontally across its length, giving it the look of one continuous AC vent. Below that are the controls for the HVAC system and it also has multiple USB ports and a wireless charging pad located just ahead of the gear lever. The new-gen i20 gets push button start/stop system, ambient lighting, a Bose audio system and a front centre armrest as well. The all-new i20 will be available with three different interior trims – Black Mono, Black and Gray and Black Mono, and Yellow Green.

However, as the image and details revealed are of the international-spec model (the steering is on the left-hand side), some features and interior trim are likely to be changed for the India-spec hatchback.

In terms of engines, the new India-spec Hyundai i20 is expected to get a 1.2-litre naturally-aspirated petrol, a 1.5-litre diesel, and also the 1.0-litre, three-cylinder turbo-petrol. In addition to a manual gearbox, Hyundai will also provide the option of a dual-clutch automatic transmission with the 1.0-litre turbo-petrol engine.

When it’s launched, the new Hyundai i20 will rival other premium hatchbacks like the Maruti Suzuki Baleno, Tata Altroz, Honda Jazz and the Toyota Glanza. Expect prices to be in the range of Rs 6-10 lakh (ex-showroom). The Korean carmaker will also launch the all-new Creta and the facelifted Tucson and Verna in the coming months.