We have compiled a list all the cars due to be launched in the Indian market next month. 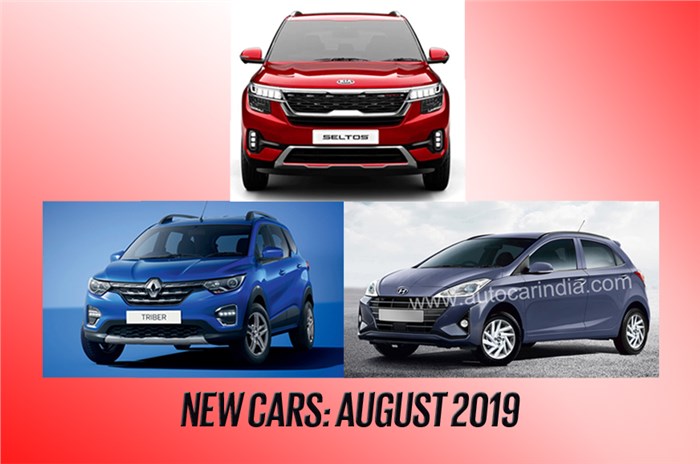 The Indian car market might have seen a harsh downturn in the past few months but there are a few bright spots in the form of new launches headed our way. One of the models on the list even marks the India debut for its manufacturer. So what’s coming? Read on to know more.

Hyundai is going to launch the all-new Grand i10 in India and it will features refreshed styling, all around. Design-wise, the new Hyundai Grand i10 will come equipped with a new, wider grille, a new alloy-wheel design, sharper headlights and new tail-light design. The interiors will sport a redesigned dashboard and new seats that free up space in the car’s interior and make it more space-efficient. The new Grand i10 will also get a part-digital, part-analogue instrument cluster and an 8.0-inch infotainment touchscreen with Android Auto and Apple CarPlay support – similar to the unit seen in the recently launched Hyundai Venue compact SUV. Powering the new hatchback will be a BS6-compliant version of the current car’s 83hp, 1.2-litre Kappa petrol engine, while a BS6-compliant version of the 1.2-litre U2 diesel unit will also make its way to the new Grand i10 range. Hyundai is set to launch the new car in India on August 20, 2019 and it is expected to price this hatchback slightly higher than the current model, in the range of Rs 5-7 lakh (estimated, ex-showroom).

The Maruti Suzuki XL6 is a crossover based on the Maruti Suzuki Ertiga MPV. The brand-new model sports refreshed styling all around as it gets exterior body cladding, new alloy wheels, a redesigned front end with a more upright nose, a flatter hood, a trapezoidal grille and new headlights with angular LED DRLs. On the inside, as the XL6 name implies, the crossover will get a six-seat configuration with captain seats in the second row. In terms of engines, the XL6 is expected to come with the 1.5-litre mild-hybrid petrol engine producing 105hp and 138Nm of torque. The engine will come paired to a 5-speed manual gearbox for now, with talks of introducing a 4-speed torque convertor automatic gearbox, down the line. Maruti Suzuki is scheduled to launch the XL6 on August 21, 2019.

The seventh generation of the BMW 3 Series is going to be launched in the Indian market on August 21, 2019. The new 3 Series is underpinned on the same Cluster Architecture (CLAR) platform as the 5 and 7 Series, which means the new 3 Series will be bigger, lighter and safer than its predecessor. The styling of the new 3 Series is marginally tweaked, compared to the outgoing model. For the Indian 3 Series, BMW will carry over the current car’s 2.0-litre turbo-petrol engine but will increase its output to produce to 258hp and 400Nm of torque, while the 2.0-litre diesel will produce 190hp and 400Nm of torque. Both engines will come paired to an 8-speed automatic gearbox.

Kia has been preparing to enter our market for the past few months and it is going to kick things off in India with the Seltos SUV. The Kia Seltos SUV was first showcased in concept form for the first time at the 2018 Auto Expo and had its international debut in Delhi on June 20, 2019. Design-wise, the Seltos gets the brand's bold 'Tiger Nose' grille, a stylish nose and sharp-looking headlight and bumper designs. The interior is expected to come with a large touchscreen infotainment system, a 360-degree camera, wireless charging, in-car WiFi, a head-up display and an ambient lighting package. Mechanically, the Seltos will come with a 1.5-litre petrol and diesel engines on offer with both manual and automatic gearbox options. A sportier variant is also in the works, which will come with a 1.4-litre turbo-petrol engine mated to a dual-clutch automatic gearbox and paddleshifters. Kia will launch the Seltos SUV in our market on August 22, 2019.

Renault is all set to launch its new sub-four-metre seven-seater that’s been christened Triber. The model is based on a modified version of the Renault Kwid’s CMF-A platform and will be positioned above the Kwid in the carmaker's India line-up. A major talking point of the Triber is also its flexible seating arrangement which offers seating for up to seven people. Mechanically, the Renault Triber comes with a 1.0-litre, three-cylinder naturally-aspirated petrol engine, which produces 72hp and 96Nm of torque. The engine will come paired with either a 5-speed manual or a 5-speed AMT automatic gearbox. Renault officially unveiled the Triber on June 19, 2019 and is expected to launch the model in the second half of August.