MG has also updated the Hector Plus with minor cosmetic changes and more features, and rolled out a 7-seat version. 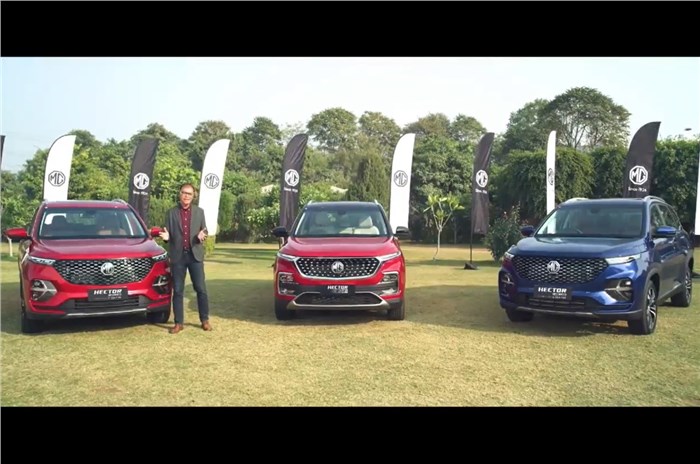 The MG Hector facelift and the updated Hector Plus have been launched in India, with prices starting at Rs 12.89 lakh and Rs 13.35 lakh, respectively (ex-showroom, India). The facelift for the Hector – introduced roughly 18 months after the mid size SUV’s launch in India – and updated Hector Plus get a few cosmetic and equipment upgrades, with the aim of keeping both models fresh. The Hector Plus is also now available in 6-seat and seven-seat configurations.

To start with, the MG Hector and Hector Plus only get minor cosmetic changes over the outgoing models. The Hector’s grille gets a revised finish and at the rear, the reflector strip running between the tail-lamps has been replaced by a black appliqué. Both SUVs now sit on larger 18-inch alloy wheels and get new front and rear scuff plates. A new Starry Blue exterior colour option is also now available on the Hector.

Moving to the interior, the most notable change on the 2021 Hector is that the all-black cabin makes way for a lighter champagne and black dual-tone one. The lighter colours should not only help lift cabin ambience but will also help enhance the feeling of space in what is already a spacious interior.

The Hector Plus is also now available in 7-seat form, which a bench in the second row, along with the previously offered 6-seat  version.

On the equipment front, the update brings with it a few big additions. The 6-seat Hector Plus and the 5-seat Hector get ventilated front seats, along with wireless phone charging and an auto-dimming inside rear view mirror.

Another update for the Hector that is bound to draw attention is the voice assistant, which can now recognise up to 31 commands in Hinglish – some completely in Hindi – for actions ranging from the opening and closing of the sunroof to air-con controls and navigation.

2021 MG Hector and Hector Plus engines

Coming to the engines, both SUVs retain the choice of engines offered on the older models. Buyers can choose between a pair of 143hp, 1.5-litre turbo-petrol engines – one equipped with mild-hybrid tech – and a 170hp, 2.0-litre diesel engine. A 6-speed manual gearbox is standard across all engine options with the non-hybrid turbo-petrol also offered with a 6-speed dual-clutch automatic gearbox option.

The MG Hector Plus, meanwhile, sees competition from the Mahindra XUV500 (Rs 13.58-18.08 lakh*) and is also mooted as an alternative to the Toyota Innova Crysta (Rs 16.26-24.33 lakh*). Come January 26, Tata’s flagship SUV – the Safari – will arrive to take on the Hector Plus. Hyundai is also working on bringing the 7-seat Creta to our market soon. Competition in this segment is definitely heating up.