Toyota brings its family look to the Maruti Suzuki Vitara Brezza and drives itself into the hot compact SUV segment. 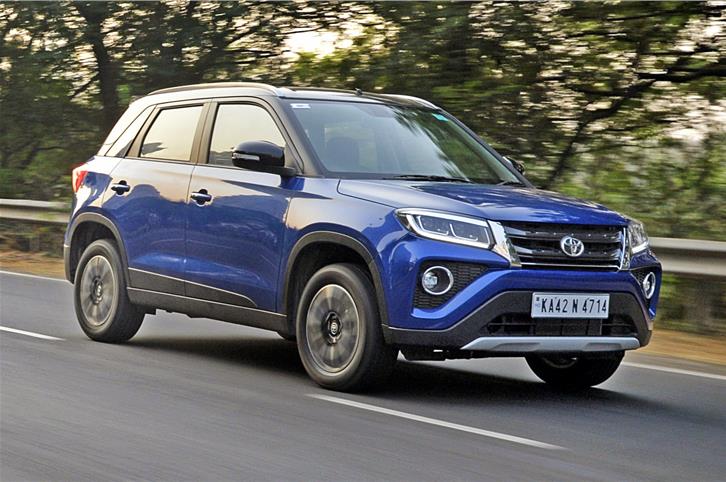 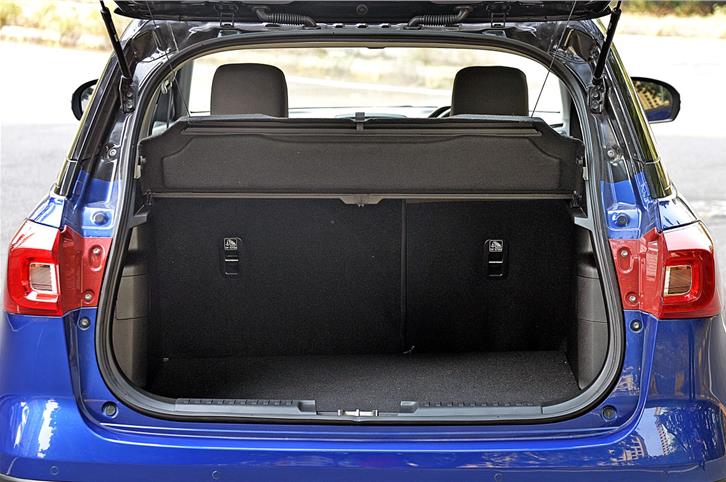 While its bread and butter models, the Innova and Fortuner bring in healthy margins, Toyota needs more affordable cars to bring in volumes and drive dealer viability. Catering to these lower segments also brings in buyers earlier into the Toyota fold and helps the brand penetrate deeper into the hinterland. With the Corporate Average Fuel Efficiency (CAFE) norms due in 2022, Toyota needs smaller cars in its fleet to achieve these targets.

It however has not had much success in these lower segments and thus the Japanese giant has chosen instead to now call on its global alliance with Suzuki Motor Corporation. In 2019, Toyota re-entered the hatchback segment in India with the Glanza, a rebadged Maruti Baleno, and now for its maiden entry into the compact SUV space its once again gone to Suzuki. This time though taking things a bit further with the facelifted Brezza, which it calls the Urban Cruiser. 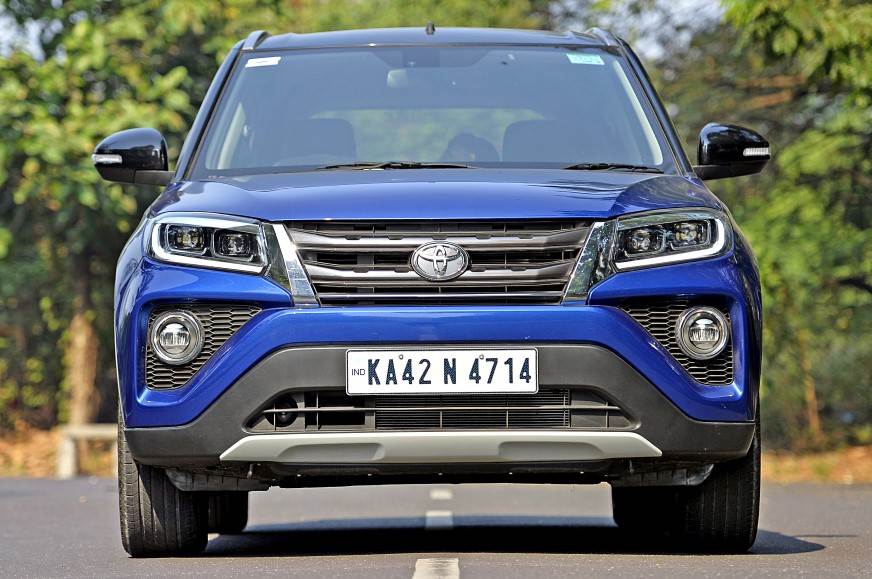 The Urban Cruiser has a distinct identity when viewed head-on.

How different is the Urban Cruiser from the Brezza?

Toyota has redesigned the front of the Urban Cruiser to give it a distinct identity rather cleverly. While the headlamps and bonnet are shared with the Vitara Brezza, its front grille looks like it has been lifted off a Fortuner, and the styling of its fog lamp housings in the bumper makes it unmistakably a Toyota on first impression. And wearing a ‘Spunky Blue’ paint shade, this Toyota comes across as one handsome SUV. Its boxy side profile however is identical to the Maruti, and it is difficult to tell them apart save for their respective brand logos on the wheel hub caps. At the rear too the changes are minimal. Logos aside, the chrome bar above the number plate housing reads Urban Cruiser, and even the cladding on the bumper is different. Curiously, the Toyota appears a bit raised compared to the Maruti from the back. 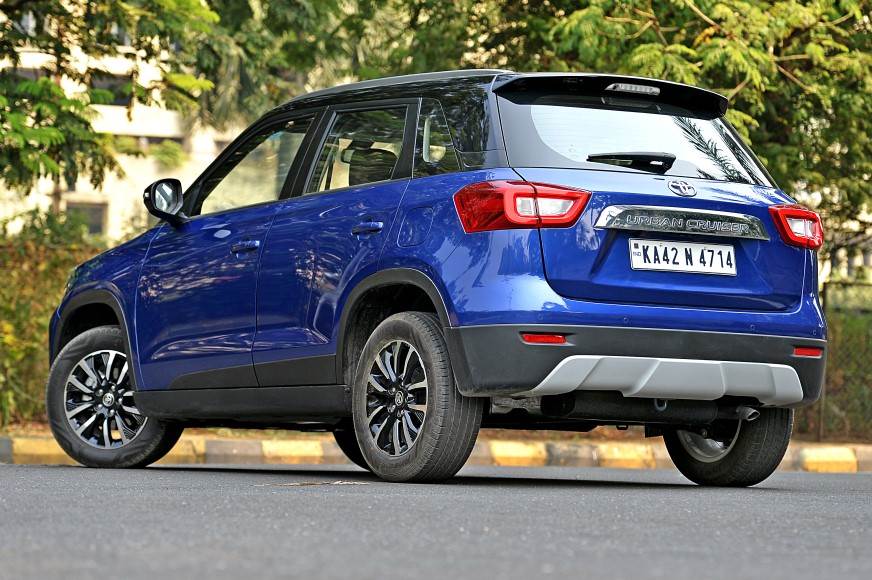 The badges are all that mark Toyota and Maruti's compact SUVs apart from the side and rear.

The interiors of the Urban Cruiser are identical to the Brezza’s, and the only change here is the colour of the seats and the fabric inserts on the door pads which are brown, compared to the Brezza’s grey. What’s nice is that, just like the Maruti’s, the front seats are comfortable, you’re seated in a high SUV-like position, and the ergonomics are spot on. And while the layout is practical with several storage areas, the overall dashboard design appears a bit dated, and the finish and quality of plastics, don’t feel as premium as its Korean rivals. 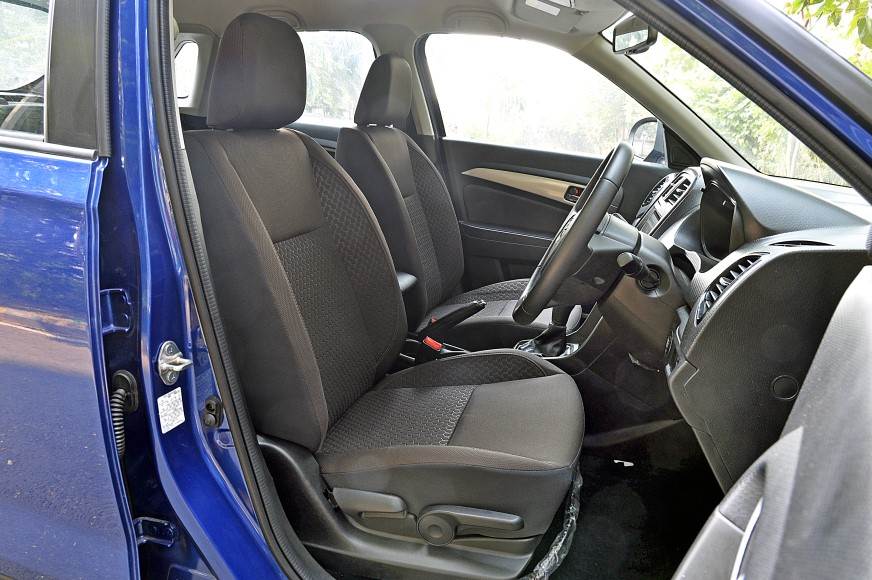 You're seated high in the Urban Cruiser's front seats.

Space at the rear is good too with ample knee and head room even for tall passengers, and due to the high-set seat, getting in and out is very easy, even for the elderly. The seat itself is comfortable and there are plenty of storage areas like door pockets, seatback pockets, cupholders in the armrest, and even a luggage hook integrated in the front seat. What is missing however, are rear AC vents and a charging provision. At 328-litres the boot is quite big and the rear seat can even be folded 60:40 to carry more cargo. 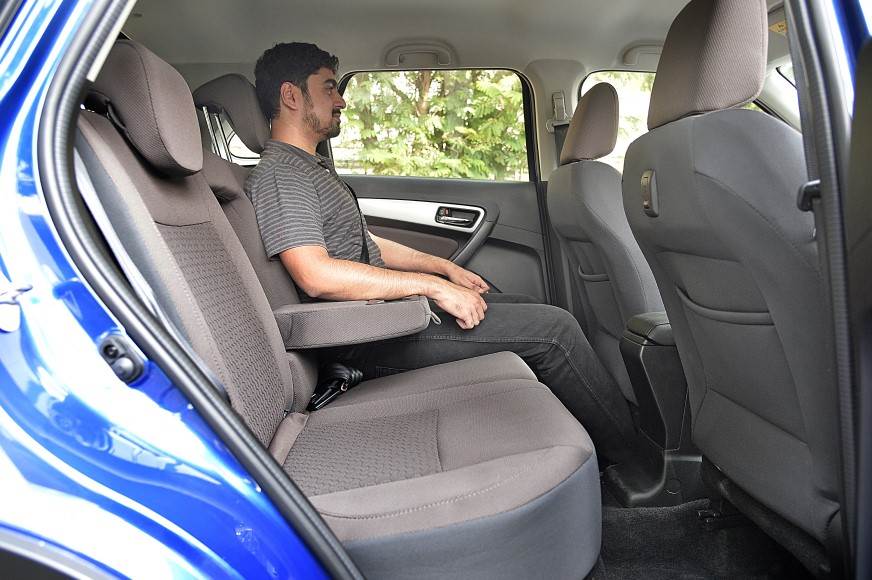 There's ample space at the rear and getting in and out is easy too.

Unlike the Brezza the Toyota comes in only higher trims and has equipment like automatic LED headlamps, LED fog lamps, 16-inch wheels, rain-sensing wipers, cruise control, 7-inch touchscreen with Android and Apple connectivity, climate control and a cooled glovebox. Compared to rivals however, it misses kit like a sunroof, air purifier and connected car features as well as safety kit like ESP, hill-hold (available in automatic), side and curtain airbags, and traction control. And while on the topic of safety, the car which is it based on, the Maruti Brezza, has been crash tested by Global NCAP and has secured a respectable 4 star safety rating, though this does not translate to the same rating for the Urban Cruiser given the new front end. 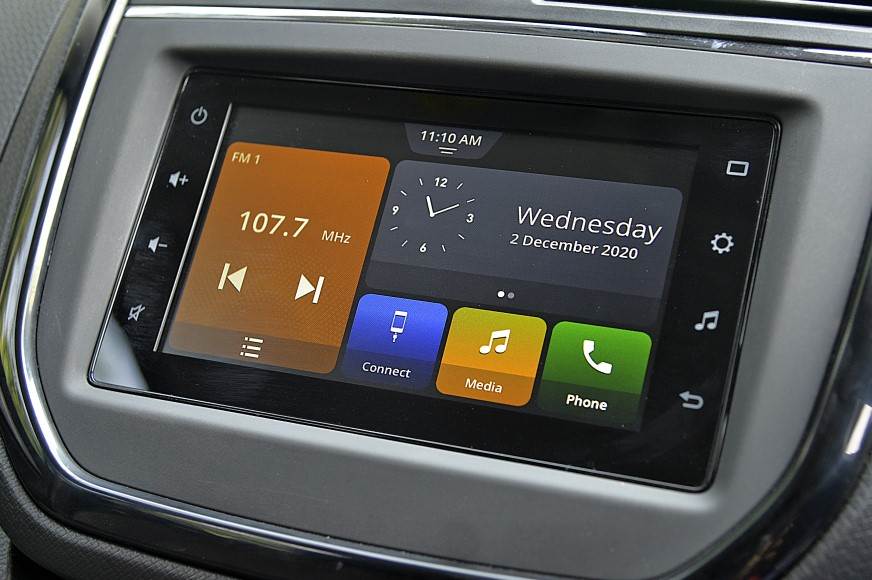 Powered by a 1.5-litre petrol four-cylinder naturally aspirated engine, shared with the Brezza, the Urban Cruiser doesn’t qualify for the sub-four-metre tax sops, due to its larger engine capacity. But this petrol engine holds a distinct advantage compared to its smaller capacity turbo petrol rivals when it comes to on-tap responses. While ambling around town in a higher gear, put your foot down, and there’s enough grunt to pull forward and close in the gaps in traffic. It feels pretty zippy around town and does its commuter duties very well. And the light, well-judged clutch, smooth 5-speed gearbox and light steering add to the ease of driving. 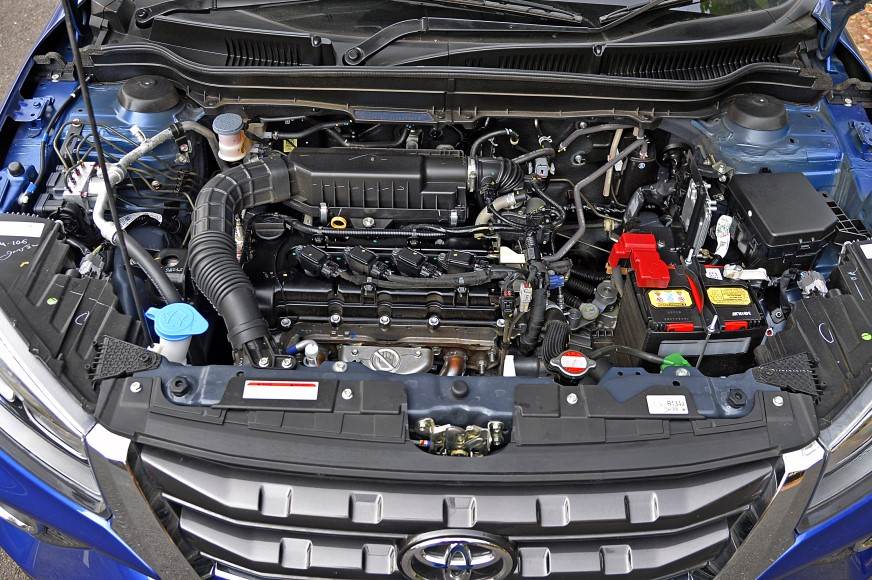 Spin this motor faster and the mid-range performance is quite flat, and you’ll miss the strong surge you’d get in a turbo-petrol SUV. With its short gearing and crisp throttle responses however, the drivability as well as its highway performance is very respectable. In a sprint to 100kph, the Urban Cruiser is neck and neck with the more powerful 120hp Hyundai Venue turbo, and it is even quicker than the Hyundai from 20-80kph in third gear by a full second. 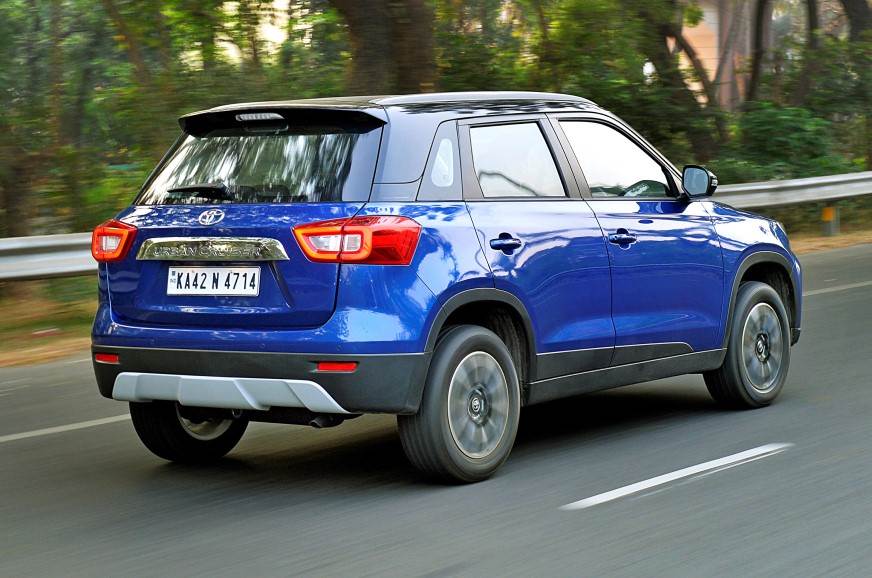 It feels zippy around town and its highway performance is respectable too.

This petrol engine is silent and vibration free, but while cruising at 100kph in fifth gear, it is fairly audible as it is spinning at 3,000rpm, working a lot harder than rivals which have six gears. Also at highway speeds, you can hear a lot of road and tyre noise.

With tough underpinnings, this isn’t a car that’ll plead you to slow down at the sight of bad roads. The way it flattens the road and drives with a sense of maturity, does give it an edge over some of its rivals. Handling is very predictable too, however, for keen drivers its steering feels a bit too light and it isn’t as sharp and as direct as the Ford Ecosport or the Tata Nexon. 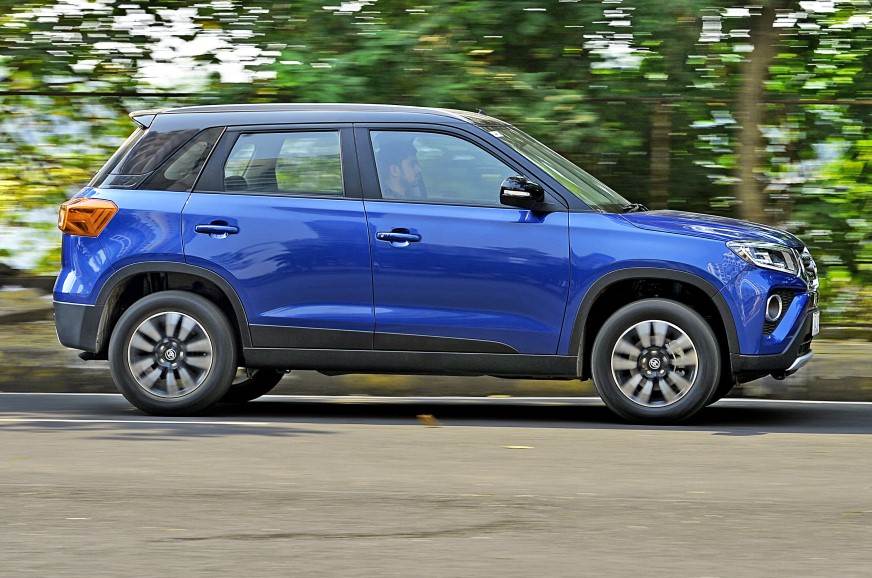 Road and tyre noise do filter in at highway speeds.

Priced around Rs 5,000-15,000 over a comparable Vitara Brezza, the Toyota Urban Cross doesn’t enjoy a price advantage over the Maruti, however, prospective buyers will find value in its longer 3 year/1,00,000 km standard warranty - compared to Maruti’s 2 year/40,000km period - as well as potentially a better service experience. For some, there will also be the lure of the Toyota badge and all this topped onto the spacious and comfortable interiors, user friendly package and the good ride mean this is one compact SUV you can’t go wrong with. 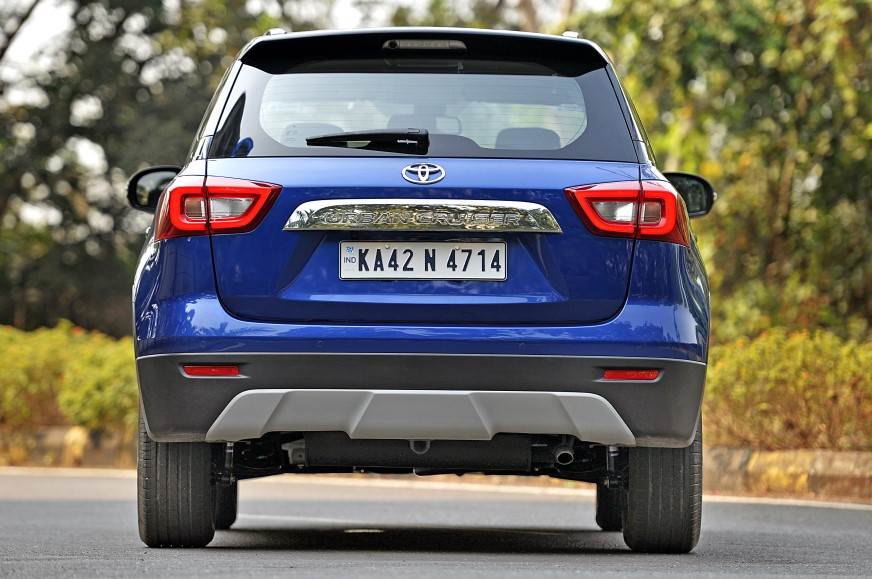 The Urban Cruiser costs Rs 5,000-15,000 more than the Brezza but comes with a longer standard warranty.