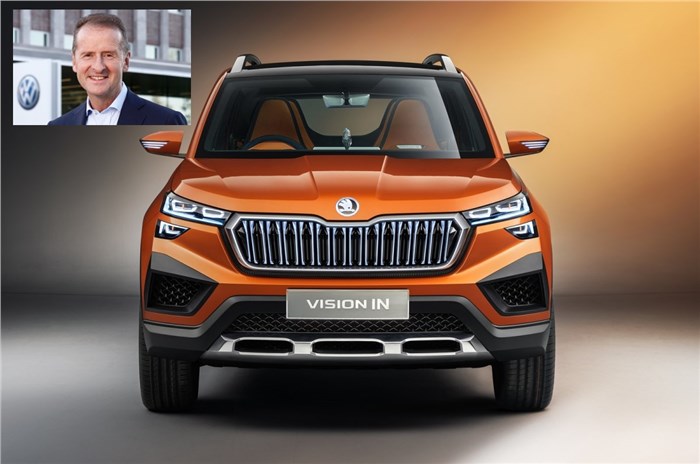 Herbert Diess, chairman of the Board of the Volkswagen Group, made a brief reference to India during the course of his speech at the virtual annual general meeting in Berlin on Wednesday.

This came up when he dwelt on the importance of Skoda as a key component of the Volkswagen Group’s growth strategy. “Skoda is performing important functions for the entire group….above all as a leading brand in Russia, Eastern Europe and India,” said Diess.

As he put it, “Of all the group brands, Skoda is the best positioned to continue growing profitably, including in very price-sensitive segments and markets.” This is where the areas of growth are for the future, which Skoda is “expected to open up” for the group.

In India, the Czech carmaker has been entrusted with the responsibility of leading a revival strategy under the newly formed entity, Skoda Auto Volkswagen India. The road ahead will see competitively priced products from Skoda and Volkswagen roll out of the new MQB platform.

The India 2.0 plan is, for all practical purposes, a do-or-die situation for the VW Group; it just cannot afford to fail. Since the time it set up shop here over a decade ago – some years after Skoda had come in – VW has had little to show in terms of market share. Maruti Suzuki and Hyundai continue to be the two lead players while the others remain marginal in contrast.

While considerable investments have gone into the India 2.0 drive, the VW Group will now be in for stiff competition from yet another Korean brand, Kia Motors. The company’s debut product, the Kia Seltos, has been a smash hit while its recently launched Sonet promises to replicate the success story in the compact SUV space.

Part of the Hyundai Group, Kia is pushing the envelope aggressively in India. The two Korean brands are keen to grow their presence and, along with the formidable presence of Maruti, will prove to be more than a challenge for the VW Group.

Incidentally, the decision to have Skoda lead the way with its India 2.0 strategy (in addition to taking the lead in the Russian market) is part of the VW Group’s larger global plan that will see other brands take similar roles. Volkswagen, for instance, will handle North and South America as well as the sub-Saharan region, comprising a large chunk of Africa.

North Africa, meanwhile, will have another group company, SEAT, in the lead manager’s role. Audi will coordinate West Asia and the Asia-Pacific region, except China, which will be the responsibility of the VW Group. This is only expected since China remains its most important market worldwide, with sales of over four million units annually.

“China remains a trailblazer and a driving force in electrification. Growth in the Chinese automotive market during this decade will be predominantly electric. Our forecasts assume that the annual volume will increase more than a factor of ten between 2020 and 2030,” Diess said.

It is in this context that VW plans to increase its share in the joint venture with JAC Motors in China to 75 percent. This is where it will develop and produce a new entry-level of its MEB electric drive platform.

According to Diess, the company is also buying a stake in Chinese battery manufacturer, Guoxuan High-Tech Co, to ensure battery capacity, expertise and supply of raw materials. This investment will give the Volkswagen Group access to the “entire value chain” in China’s battery production.

Diess said the global economy was slated to grow by over four percent but pre-crisis levels “are not likely to be reached” until at least 2022. All medium and long-term forecasts continue to involve “considerable uncertainty” and depend on the future course of the pandemic. For VW, the chairman reiterated, the goal is to remain profitable in “the sum of all parts” of the group.

Volkswagen Vento – three important misses but the one big hit

Skoda used car business to be launched in India