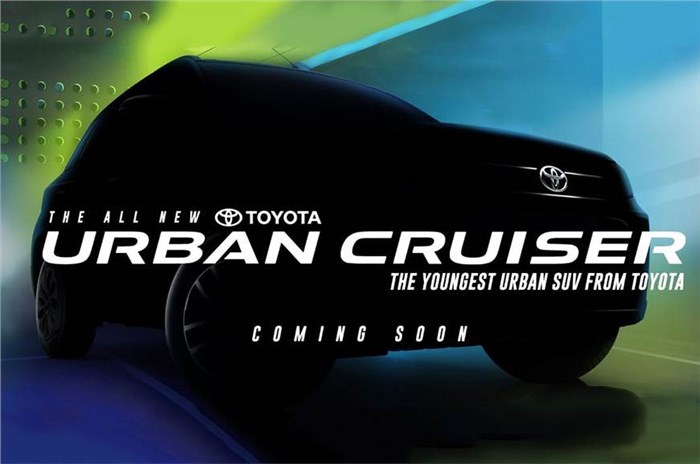 
The Toyota Urban Cruiser compact SUV goes on sale next month and dealer sources confirm bookings for the model will open on August 22. The carmaker released the first teaser image of its compact SUV earlier this week.

What is the Toyota Urban Cruiser?

Toyota chose the Urban Cruiser nameplate so that there is a familial link – the Land Cruiser name carries cache in most global markets. Here’s more details on the Toyota Urban Cruiser’s name.

Will the Toyota Urban Cruiser and Maruti Suzuki Vitara Brezza look the same?

While the overall silhouette will be quite similar, Toyota will ensure a certain level of visual distinction. The majority of differences will be seen at the front with the nose styled in-line with Toyota’s latest models. There will also be changes to relatively inexpensive 'soft parts’ like the plastic bumpers and grille. There will be no sheet metal changes and even the alloy wheels are expected to be shared between the two.

The cabin of the Urban Cruiser will also be near-identical to the Brezza. The Urban Cruiser is expected to use lighter-coloured upholstery and trim, as opposed to the grey and black theme on the Brezza. But that is where the differences will end. In terms of features and tech, the two SUVs will be identical.

What engines will the Urban Cruiser get?

No surprises here, the Maruti and Toyota’s compact SUVs will share engines and gearboxes. A 105hp/138Nm, 1.5-litre petrol engine will be the sole engine on the Urban Cruiser while buyers will have the option of a 5-speed manual or 4-speed automatic gearboxes.

Any info on the Urban Cruiser’s features?

Like with the Glanza, the Urban Cruiser is expected to be available in higher-spec variants only. This means that the entry-level Toyota will be relatively well-specced. However, there won’t be much of a difference in prices for equivalent variants of the Urban Cruiser and Vitara Brezza.

A key point of distinction between the two compact SUVs will be in their standard warranty periods. Maruti offers a 2-year/40,000 kilometre warranty pack with the Vitara Brezza while Toyota is expected to offer a 3-year/1 lakh kilometer warranty as standard.

The Toyota Urban Cruiser isn’t the only new entrant to the crowded compact SUV segment. The Kia Sonet gets a global reveal tomorrow while Renault’s Kiger and Nissan’s Magnite also go on sale over the next few months. The current crop of models have also seen important revisions. Tata updated the Nexon earlier this year, the Hyundai Venue recently got an iMT, Ford’s EcoSport got a mid-spec automatic variant, while Mahindra’s 130hp XUV300 is also around the corner.