The facelifted mid-size sedan features only cosmetic changes, with the mechanicals remaining untouched. 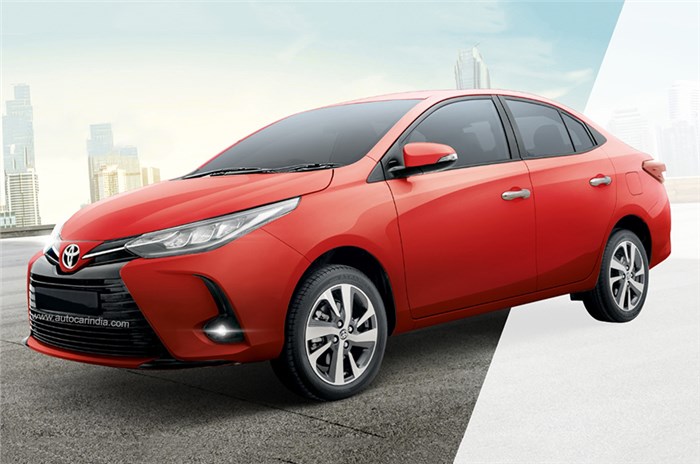 The facelifted Toyota Vios has just been revealed in the Philippines. Globally, this is actually the second major facelift to this generation of the mid-size sedan, with the original having been launched in the ASEAN market back in 2013. The model launched in India in 2018, called the Yaris in our market, was actually the first facelifted version.

The most notable change to the mid-size sedan is its revised fascia, which features a new bumper, new LED headlamps and an updated upper grille. The restyled front bumper houses a trapezoidal central air dam, which is somewhat reminiscent of the Lexus grille design. The fog lamp housing has also been updated with new, C-shaped recesses on either side of the air dam. The alloy wheel design is also new, though the rear styling remains more-or-less unchanged with this update.

What’s new on the Inside?

Not much has changed on the inside compared to the previous model. Barring the new infotainment system with Android Auto and Apple CarPlay support, the overall all interior layout and equipment remains untouched. In its top-spec guise, the model still gets 7 airbags, keyless entry and go, cruise control, automatic climate control, drive modes, paddle-shifters on the automatic versions, among other features.

What engines does the Toyota Vios (Yaris) facelift come with?

Under the hood, Toyota continues to offer the facelift with the same engine options as the outgoing model. Overseas, these are a 1.3-litre, four-cylinder petrol engine, good for 98hp and 123Nm, as well as a 1.5-litre, four-cylinder petrol which produces 106hp and 140Nm. Both engines can be had with either 5-speed manual or a CVT automatic gearbox. The 1.5-litre unit is the one offered on the Yaris sold in India.

Will the Toyota Yaris facelift come to India?

Toyota has not made any announcement regarding the launch of the facelifted Yaris in India, yet. The current, India-spec Yaris has been on sale in India since 2018, but the model has not been able to sell in quite the same numbers as its established rivals. In fact, Toyota India has since decided to open up the Yaris model range to fleet operators. Besides this, Toyota is also working on bringing the Maruti Suzuki Vitara Brezza-based Urban Cruiser to our market soon.