The Tata Punch rivals high-riding hatchbacks like the Ignis and KUV100, as well as the competitively priced Nissan Magnite and Renault Kiger compact SUVs. 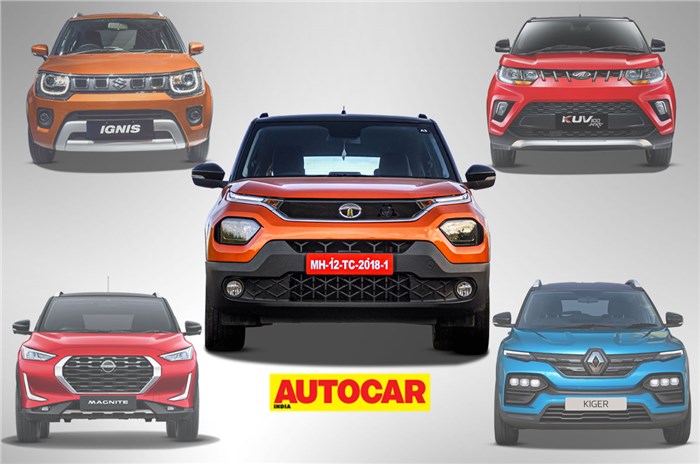 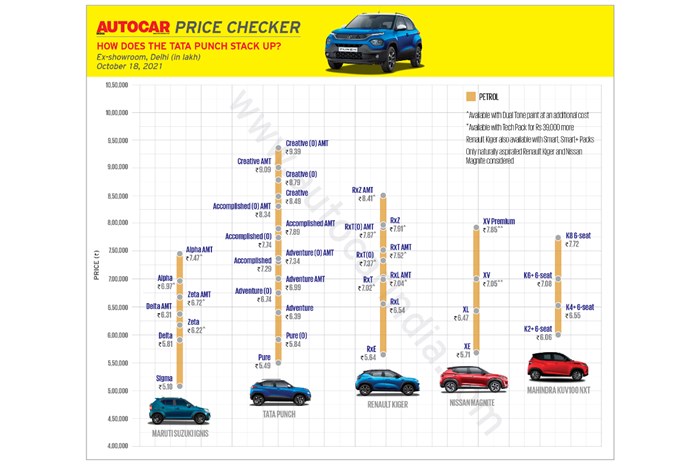 Tata Motors has finally launched the much-anticipated Punch micro-SUV, with prices starting at Rs 5.49 lakh. Based on the ALFA architecture that also underpins the Altroz, the Punch is available in four trims – Pure, Adventure, Accomplished and Creative, with a solitary petrol engine and two gearbox options.

In terms of competition, the Tata Punch rivals high-riding hatchbacks like the Ignis and KUV100 and competitively priced compact SUVs such as the Nissan Magnite and Renault Kiger.

Read on to see how Tata’s latest SUV compares against these aforementioned models in terms of dimensions, engines and gearboxes.

In terms of dimensions, the Tata Punch falls right in the middle of the pack. The Punch is longer overall and wider and has a longer wheelbase than the Ignis and the KUV100, but it falls short on both departments against the Magnite and the Kiger. Similarly, the Punch is taller than the Maruti, the Nissan and the Renault, but is shorter than the Mahindra.

The Kiger boasts of the largest boot here, at 405 litres, with the Punch following closely with a 366-litre boot. The Magnite is not far behind with a 336-litre boot. The Ignis and KUV100 have the smallest boots here, with a capacity of 260 litres and 243 litres, respectively.

The Renault-Nissan Alliance twins also have the largest fuel tanks in this comparison at 40 litres. The Tata Punch, meanwhile, has a 37-litre tank, while the Mahindra KUV100 NXT has a 35-litre tank and the Maruti Ignis the smallest at 32 litres.

In terms of tyre sizes, the Punch, the Magnite and the Kiger all get 16-inch alloys in their top-spec form. The Ignis and KUV100, meanwhile, make do with 15-inchers.

The Punch also has class-leading breakover, approach and departure angles and water wading capability, as per Tata. The micro-SUV has an approach angle of 20.3 degrees, departure angle of 37.6 degrees, a rampover angle of 22.2 degrees and a water-wading depth of up to 370mm, proving its SUV credentials.

The Punch’s three-cylinder, NA motor is the most powerful of the lot, putting out 86hp, while the KUV’s is the torquiest, producing 115Nm. Given the Magnite and Kiger’s engine’s smaller displacement, they have least output – 72hp and 96Nm.

Meanwhile, the Maruti Suzuki Ignis is the only car here that comes with a four-cylinder engine. The 1.2-litre unit is naturally aspirated and puts out 83hp and 113Nm, which is on par with the competition.

However, the Nissan Magnite and Renault Kiger also come with 1.0-litre turbo-petrol engines, making them the most powerful overall. It puts out 100hp and either 160Nm or 153Nm, depending on the gearbox. The Punch is likely to get the 1.2-litre turbo petrol engine from the Altroz in the future.

The Tata Punch comes equipped with automatic engine start/stop functionality which is said to aid fuel efficiency. The official ARAI-rated figure for the Punch is 18.97kpl for the manual and 18.82kpl for the AMT auto. Although these figures are impressive, they do lag behind the Ignis’ figures and the manual versions of the Kiger and Magnite turbo. The Mahindra KUV100, meanwhile, is the least efficient.

Similarly, the automatic versions of Punch start at Rs 6.99 lakh, which, although more expensive than the Ignis, is cheaper than the Magnite and Kiger. In their fully loaded automatic specs, the Ignis is cheaper than the Punch while the Nissan and Renault are more expensive. However, it’s worth noting that these prices also take into account the more powerful, turbocharged variants of the Nissan and Renault which come with the more sophisticated CVT gearbox.

Furthermore, the Magnite and Kiger are offered with additional equipment packs with some variants of the Kiger also offering a dual-tone paint scheme – which further drives up prices. This is how the Tata Punch compares against rivals on paper. However, only a proper on-road comparison will determine how it fares in the real world.