The Tata Punch is available in four trims, with a solitary petrol engine and two gearbox options. 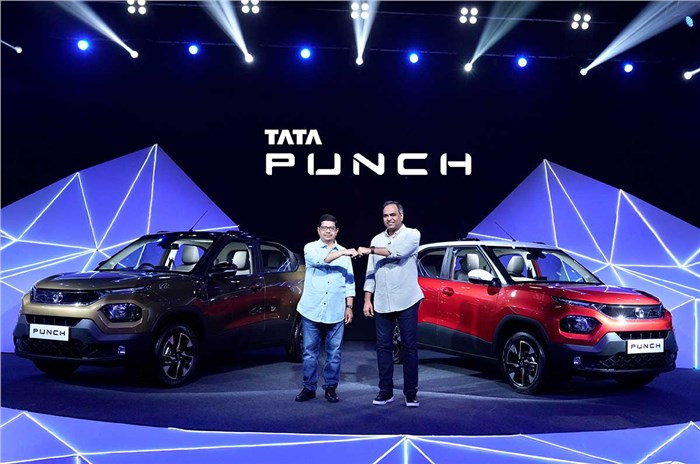 Tata has finally launched the Punch, with introductory prices starting at Rs 5.49 lakh (ex-showroom). These prices will only be valid till December 31, 2021. The micro-SUV is based on Tata’s ALFA architecture and is being offered in two engine-gearbox combinations. The Tata Punch is available in four trims – Pure, Adventure, Accomplished and Creative. Given below are the variant-wise prices for the new Tata Punch.

The top-spec Creative trim is loaded with features such as a 7.0-inch semi-digital instrument cluster, automatic projector headlamps, LED daytime running lamps, automatic climate control, rain-sensing wipers, a rear wiper and washer, puddle lamps and 16-inch diamond cut alloy wheels, all of this in addition to the tech from the Accomplished trim.

The Tata Punch is also being offered with customisation packs for the variants. The Pure and Adventure trims are offered with a Rhythm pack, while the Accomplished and Creative can be had with a Dazzle and IRA pack, respectively.

The Rhythm pack (Rs 35,000) for the Pure trim adds in an audio system with four speakers and steering mounted controls, while on the Adventure it upgrades the standard audio system to the 7.0-inch Harman touchscreen replete with Android Auto and Apple CarPlay.

On the Accomplished trim, the Dazzle pack (Rs 45,000) will get you projector headlamps, LED DRLs, 16-inch diamond cut alloys and a black finished A-pillar. The IRA pack (Rs 30,000) for the fully-loaded Creative trim, as the name suggests, adds in Tata’s iRA connected car tech to the package.

The Tata Punch is powered by a 1.2-litre, three-cylinder naturally aspirated petrol engine that produces 86hp and 113Nm of torque. It can be had with either a 5-speed manual or an AMT automatic gearbox.

While this engine already does duty on the Tiago, Tigor and Altroz, in the Punch, it additionally features automatic engine start/stop functionality to aid fuel efficiency. This results in an ARAI claimed fuel economy figure of 18.97kpl for the manual and 18.82kpl for the automatic variants. The AMT gearbox on the Punch also features traction modes like some bigger Tata SUVs. Tata motors says the Punch will do 0-60kph in 6.5 seconds and 0-100kph in 16.5 seconds. You can read more about the Tata Punch in our review.

The Tata Punch rivals high-riding hatchbacks like the Maruti Suzuki Ignis and the Mahindra KUV100 NXT in our market, with higher variants also expected to see competition from the Renault Kiger and Nissan Magnite compact SUVs.

Tata Punch EV in the works