India-bound Tata Altroz will take on the likes of the Hyundai i20, Maruti Suzuki Baleno and the Honda Jazz. 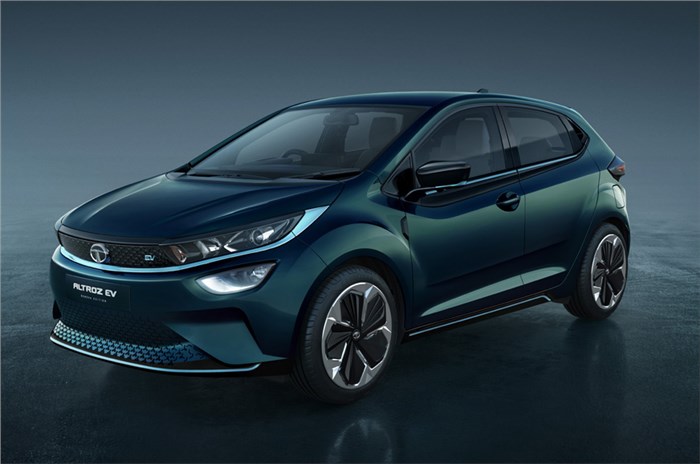 Tata Motors has revealed its all-new Altroz premium hatchback at the 2019 Geneva motor show. In brief, the Tata Altroz is the production version of the 45X concept hatchback that starred at Auto Expo 2018 and is a model that will take on the Maruti Suzuki Baleno, Hyundai i20 and Honda Jazz. The premium hatchback is scheduled to go on sale in India in August this year.

At the Auto Expo, Tata executives had categorically stated the production version of the 45X would not stray too much from the concept’s look. And now with the showcase of the Altroz, it is clear that the Tata team has kept its word. The Altroz follows the Harrier to become the second production Tata model to follow the carmaker’s bold Impact Design 2.0 styling language. Key design and styling features include sleek surfacing, strong fenders and relatively large wheels, with the show car's 17-inch alloys expected on the top-spec variants.

Well proportioned and striking in look, the Tata Altroz could easily pass off as hatchback from a European manufacturer. The stance is decidedly cab-forward but with a good balance to the design. The large and upswept headlamps that fuse in with the grille are a new take on Tata’s ‘smiling grille’ look, while the high-set auxiliary lamps are new-age Tata.

What also gives the Altroz distinction is the treatment of the window line. The designers have used a multi-layered look with a thick band of black plastic above the ridge-like shoulder line. And, as a result, the glasshouse appears larger than it is and some might even see a hint of the Lamborghini Diablo in the kink on the front door. The Altroz is also the latest car to feature the door handle aft the rear window rather than on the door itself. At the rear, a band of black that runs the width of the tailgate and encircles the edgy taillights is unique in its own right.

The Geneva motor show also gave us a good look of the Tata Altroz’s interior. The all-black dashboard follows a multi-layered theme and the touchscreen atop the centre console in easy on the eyes. A part-digital instrument cluster and chunky steering wheel are other interesting details in the cabin. Tata says the Altroz's cabin will be big on space for small items and will also impress for material quality. Rear seat space is good but not class-leading, and headroom is also not as generous as like-sized hatchbacks.

The Altroz is based on Tata Motors’ versatile new ALFA architecture that can accommodate multiple body styles and has been envisioned with electrification in mind. The Tata Altroz will go on sale with three engine options – a 1.2-litre naturally aspirated petrol engine from the Tiago hatchback, and a 1.2-litre turbo-petrol and 1.5-litre turbo-diesel from the Nexon compact SUV.

An all-electric version of the Tata Altroz is also being readied and it is likely to go on sale in two years. The Altroz EV is on display at Geneva in concept form. While the concept features unique bumpers and wheels, the basic shape and look are shared with the engine-powered Altroz. On the inside, the Altroz EV sports a slightly different dashboard and also stands out for its Jaguar-like rotary gear selector.

While Tata did not reveal all the technical details, it did state the Altroz EV will have a range of 250-300km and have fast-charge capabilities with 80 percent charge possible in one hour.

The Altroz is Tata’s most upmarket hatchback yet, but in true Tata style, it could play the value card with a price lower than that of direct rivals. And success in the premium hatchback segment would be a big win for Tata Motors.