The Skoda Kushaq will enter the midsize SUV segment this year. Here’s what you need to know about the all-new SUV. 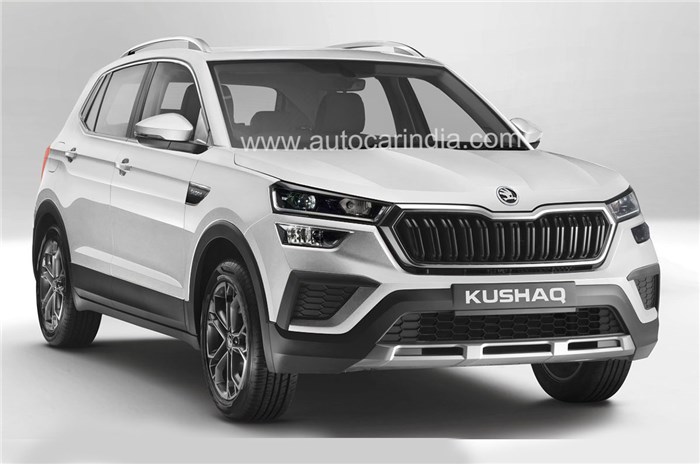 The Skoda Kushaq is set to be launched in India this year. The midsize SUV is the first model to arrive from the VW Group’s India 2.0 project and is based on the India-specific MQB-A0-IN platform. We’ve already driven a prototype of the Kushaq and have experienced the production version of the SUV as well. Here’s what you can expect from Skoda’s latest SUV.

The Skoda Kushaq has a striking exterior design that doesn’t stray far from that of the Vision IN concept. Up front, the Kushaq has a wide, typically Skoda grille that’s surrounded in chrome. The grille is flanked by a dual-headlight setup, with the LED DRLs, headlamp cluster and turn indicators on the top, and the fog lamps below. The headlights have a few crystalline elements that look quite sharp. The front bumper has plenty of cuts and creases and a faux air intake under the fog lamps, which makes it look sporty. There’s also a faux skid plate with three slats at the bottom.

Along the sides, the Kushaq has a prominent character line that extends right up to the tail-light and a chrome-lined lower windowsill. It also gets body cladding on the lower parts of the doors and around the wheel wells. Top-spec versions will feature roof rails and 17-inch diamond-cut, dual-tone alloys which look sporty.

At the rear, there’s a roof-mounted spoiler and a faux silver diffuser lower down. It features wraparound LED tail-lights with some prominent crystalline elements and a chrome strip that runs across the boot, which adds to the sense of width. As is the case with newer models from the company, there’s ‘Skoda’ lettering in chrome across the tailgate. Overall, despite the compact dimensions, the Kushaq looks quite muscular and similar to its larger siblings, the Kodiaq and Karoq.

Much like the rest of the Skoda range, the Kushaq too will have quality interiors with some premium touches. The Kushaq gets a layered dashboard with a thin chrome bar connecting the large, chrome-lined vents at each end. The dash also has a neat-looking knurled plastic panel running its width.

The Kushaq gets a two-spoke steering wheel, in line with newer Skodas like the Superb. It feels premium and features knurled scroll wheels amidst the steering-mounted buttons. In terms of instrumentation, the Kushaq features analogue dials.

There’s a free-standing 10-inch touchscreen in the centre of the dash, below which are the AC vents and the AC controls. The AC controls are via a touch panel, and while it looks neat, it won’t be as intuitive or safe to operate as physical buttons and knobs are. On top-spec trims, the Kushaq gets leatherette upholstery on the steering wheel, gear knob and seats.

However, there are a few low-rent bits inside the cabin too. For example, the plastics lower down are hard and scratchy, and the headlining is the cheaper woven type and not a knitted one.

Safety kit on offer includes six airbags, a rear parking camera, ISOFIX child seat mounts, auto headlamps and wipers, and a multi-collision braking system. Skoda is also offering ESC as standard across all variants – a segment first, while a tyre pressure monitoring system and hill-hold control are optional. All variants get disc brakes up front and drum brakes at the rear.

Being a Skoda, the Kushaq also has some ‘Simply Clever’ features, like the non-slip base for the cupholders, and smartphone holders in the front seatbacks. There are also twin cup holders at the rear, a rear-centre armrest and 26.2 litres of storage space in the cabin.

However, the Kushaq does miss out on some key features like a large panoramic sunroof, and a digital instrument cluster, the latter of which will be on offer on the Volkswagen Taigun. Furthermore, it would have been nicer to see disc brakes all around for the Kushaq.

With the Kushaq, Skoda is offering two engine options – a 1.0-litre, three-cylinder turbo-petrol and a 1.5-litre, four-cylinder turbo-petrol. The 1.0 TSI puts out 115hp and comes with a 6-speed manual or a 6-speed torque-convertor auto. The 1.5 TSI unit, meanwhile, puts out a healthy 150hp and will be available with a 6-speed manual or a 7-speed dual-clutch automatic. Both engines will be locally produced at Skoda’s Chakan plant near Pune.

Skoda is expected to position the Kushaq slightly below its VW cousin, the Taigun. Expect Skoda Kushaq prices to be around the Rs 10-16 lakh (ex-showroom) range. The Skoda Kushaq will be available in three trim levels – Ambition, Active and Style – and five colour options – Candy White, Brilliant Silver, Carbon Steel, Honey Orange and Tornedo Red.

In terms of rivals, the Skoda Kushaq will compete against the upcoming Volkswagen Taigun, the Kia Seltos, the Hyundai Creta, the Nissan Kicks, the MG Hector and the Tata Harrier.