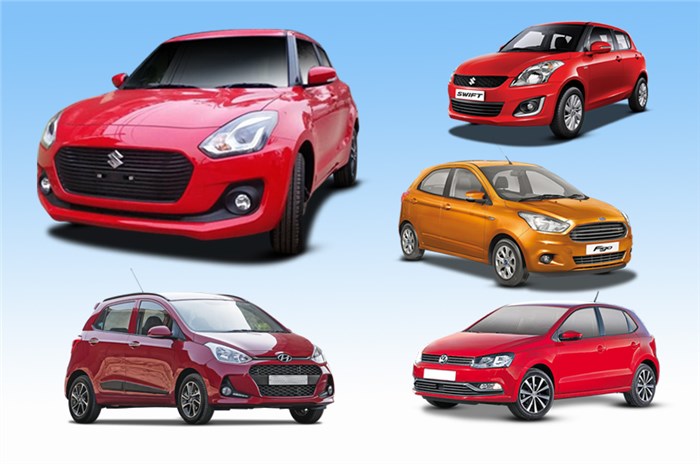 Here is how the new incoming Swift compares against the current Swift and its key rivals.

The Swift has always been a money-spinner for Maruti in India, usually registering sales that put it in the top 10 every month. The third-gen Swift, first unveiled at the end of 2016, is likely to be showcased at the Auto Expo 2018 and also expected to launch for the Indian market. It has been spied in the country recently and dealers have started accepting bookings for the hatchback, suggesting that its launch is on track.

Maruti’s contender in the mid-size hatchbacks segment sees it rival the likes of the Hyundai Grand i10, Ford’s Figo and even the Volkswagen Polo at the higher end of the segment.

Here’s how Maruti’s new Swift fares on paper against its competition, and the outgoing, second-gen model:

The new Swift is marginally shorter in length and height than most of its rivals, and yet sports one of the longest wheelbases. However, the third-gen Swift isn’t expected to have class-leading space. Expect interior room to have increased over the current-gen model. Though, the overall compact dimensions should help manoeuvrability on our congested roads.

While the India-spec Swift’s interiors have yet to be revealed in full, we expect the cabin to feature a new instrument cluster, a more upmarket, multi-function steering wheel and a touchscreen infotainment system compatible with Apple CarPlay, Android Auto and MirrorLink found on all higher-end Maruti cars. In terms of safety, two airbags are expected along with ABS on the higher trims. This kit will set it on-par with rivals.

Powering the new Swift will be the same 84hp, 1.2-litre petrol and 75hp, 1.3-litre diesel engines that are available on the current model. However, the new-gen model is expected to outstrip its predecessor in terms of performance and fuel efficiency as it shares the Baleno’s lightweight platform. The new Swift is also expected to be the lightest car in its class, which, on-paper, translates to class-leading economy and performance.

Unlike the current-gen car, Maruti is expected to launch five-speed AMT-equipped versions of the Swift as well. While all the Swift’s rivals have a petrol-automatic option, the Swift will be the only one with a diesel-automatic on offer in this segment.

On-paper, the new Maruti Swift is expected to shake up the segment much in the same way that its predecessor did. A comprehensive road test and a comparison against its rivals will be necessary to get a proper verdict but it looks like Maruti does have another cash cow on its hands.