With a 56 percent share, the diesel option is proving to be the more popular powertrain among Creta buyers. 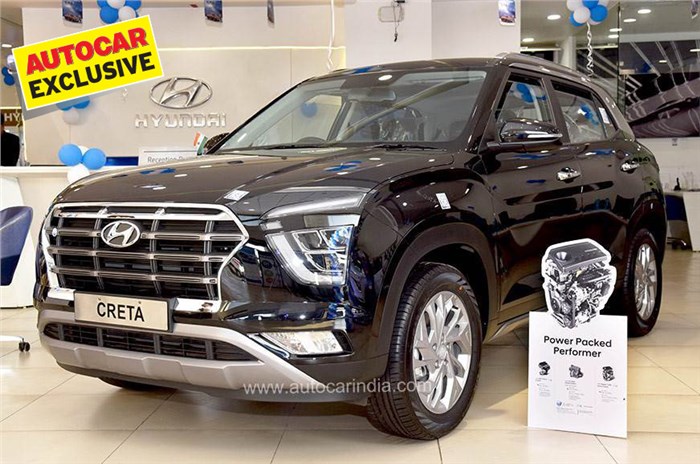 The second-generation Creta was launched on March 16 and in the two months since its price announcement, Hyundai has managed to gather 21,000 bookings for the midsize SUV. In a recent #LiveWithAutocar session on Instagram, Tarun Garg, Director – Sales, Service and Marketing, Hyundai Motor India revealed that with bookings constantly streaming in through Hyundai’s online retail channel, orders have increased by 50 percent from the 14,000 customer bookings received at the time of launch. However, the nationwide lockdown coming into effect just a week after the Creta’s price announcement has definitely dampened spirits in the initial months of the market debut, which are usually the biggest on sales.

Still, Hyundai has managed to hand over the keys of the new SUV to more than 1,000 customers, with around 6,000-7,000 units of the model stocked at dealerships, awaiting deliveries post relaxation of shutdown measures.  At the time of the launch, the company had announced a waiting period of up to eight weeks. However, this could change, considering that Hyundai has recently resumed production at its Tamil Nadu manufacturing facility.

The 2020 Hyundai Creta gets three engine options – a 115hp, 1.5-litre petrol with a manual and a CVT automatic transmission; a 115hp, 1.5-litre diesel with a manual and torque converter auto gearbox and a 140hp, 1.4-litre turbo-petrol with just a DCT automatic transmission. The SUV is available in five trim levels – E, EX, S, SX, SX (O) – and introductory prices are pegged at Rs 9.99-17.20 lakh (ex-showroom, India).

Garg also revealed that 56 percent of the bookings have been received for the diesel variants, with the 1.5-litre petrol bagging 30 percent of the orders and the 1.4-litre turbo-petrol engine, which is only available in the top two trims, accounting for the remaining 14 percent.

While many automakers are simplifying their engine line-ups in the BS6 era, Hyundai is expanding powertrain choices across its range by introducing turbo-petrol options. It is also betting big on diesels, especially in a market that has seen big players like Maruti Suzuki, Renault-Nissan and Skoda-Volkswagen exit that arena. The Korean company believes that even if the price difference between petrol and diesel fuel reduces, demand for diesel engines will remain due to benefits like higher mileage and a more torquey performance.

Despite many expecting the markup in BS6 diesel vehicle prices to affect their market share, Hyundai stands to gain from some of its competition vacating this space altogether. “Even if the diesel market goes down and we are able to take the lion's share, the overall volumes will only go up as far as Hyundai is concerned. Our diesel penetration continues to go up,” explained Garg.

The Creta faces stiff competition from its cousin, the Kia Seltos, as well as the Nissan Kicks, MG Hector and Tata Harrier in our market.