In addition to a new PHEV petrol variant, the diesel line-up has also been upgraded with a new engine and mild-hybrid tech. 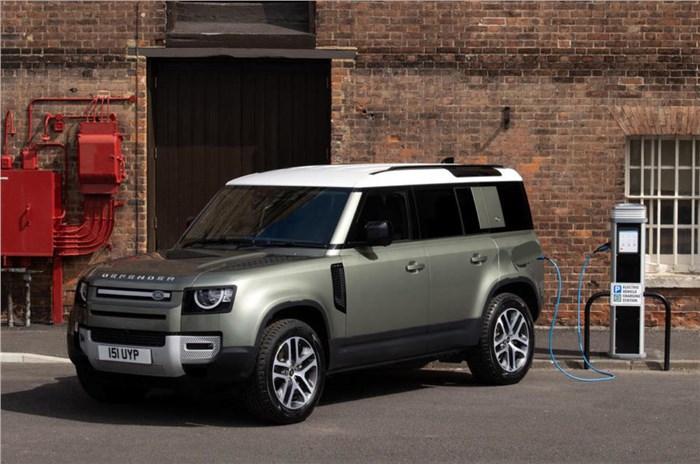 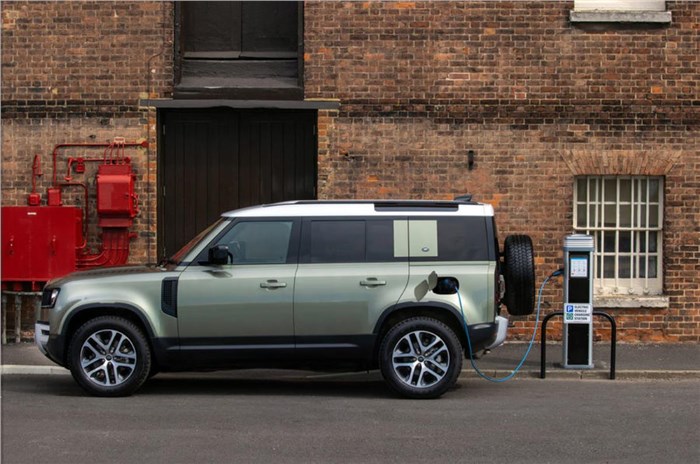 The Land Rover Defender has received a range of updates for the 2021 model year line-up, including a new plug-in hybrid petrol engine and a new diesel engine with mild-hybrid tech. Sales of the short wheelbase Defender 90 variant, which were  delayed due to the impact of Covid-19 lockdowns, have also commenced in international markets, though bookings in India are still on hold.

The first plug-in hybrid Land Rover Defender will globally go on sale next year, with a 404hp powertrain capable of 43km of electric-only running and the promise that it will be “the most capable and durable” version of the off-roader.

The new Defender P400e plug-in hybrid electric vehicle (PHEV) option will be offered only in long-wheelbase 110 form initially. It uses the same powertrain as the Range Rover and Range Rover Sport. This mates a 300hp, 2.0-litre four-cylinder petrol engine to a 143hp electric motor.

Land Rover claims the model will offer “substantial torque” that will add to the rugged machine's off-road capability. The powertrain can achieve 0-100kph in 5.6sec and a top speed of 209kph.

The Defender P400e features 20-inch wheels and electric air suspension as standard, with its powertrain tuned to allow electric-only running in low-range mode, both on and off-road.

Charging of its 19.2kWh battery comes via a Mode 3 connection using a charging power socket on the left of the vehicle, while a Mode 2 connector is available as an option. An 80 percent charge takes around half an hour on a 50kW rapid charger. Regenerative braking is also used.

The P400e is available with either five or six seats, and includes privacy glass and climate control as standard.

Alongside the plug-in hybrid, Land Rover has added a new 3.0-litre six-cylinder Ingenium diesel engine to the Defender line-up. Using mild-hybrid technology to increase efficiency, it will be offered in three outputs, starting with the D200 (200hp and 500Nm) and the D250 (249hp and 570Nm), replacing the 2.0-litre four-cylinder unit previously featured in the range in D200 and D240 states of tune. On the Defender 110, the new D200 achieves 0-100kph in 10.2sec, with the D250 cutting that to 8.3secs.

After a delayed market launch of the Defender 90 due to Covid-19 related lockdowns, the short wheelbase, three-door model has now gone on sale in international markets.

It will be offered with the same petrol and diesel engines offered in the larger 110, with the P300 and P400 petrol units joined by the D200, D250 and D300 diesel units. As with the 110, all the Defender 90 models use an eight-speed automatic gearbox. Petrol versions feature all-wheel-drive, while the Ingenium diesels use the new, intelligent all-wheel-drive system.

Land Rover India had announced pricing for the off-roader, earlier this year. The Defender is priced at Rs 69.99-86.27 lakh (ex-showroom, India) in our market and is available in both, the 3-door 90 form as well as the 5-door 110 iteration.

Though Defender 90 sales have commenced abroad, dealer sources have confirmed that bookings for the model continue to be on hold for our market, with no word on the expected timeframe of its arrival. Deliveries of the Defender 110 will, however, begin next month.

The Land Rover SUV has initially been launched in India with a sole 300hp, 2.0-litre four-cylinder turbo-petrol engine (P300). A diesel powertrain option is also expected down the line, though there is no official communication on the P400e PHEV variant.

We drove the new avatar of the British marque’s legendary off-roader in Namibia earlier this year. Click here for our exclusive review of the new Land Rover Defender.