We take a closer look at the production process of the 2020 Defender at JLR’s new plant in Nitra, Slovakia. 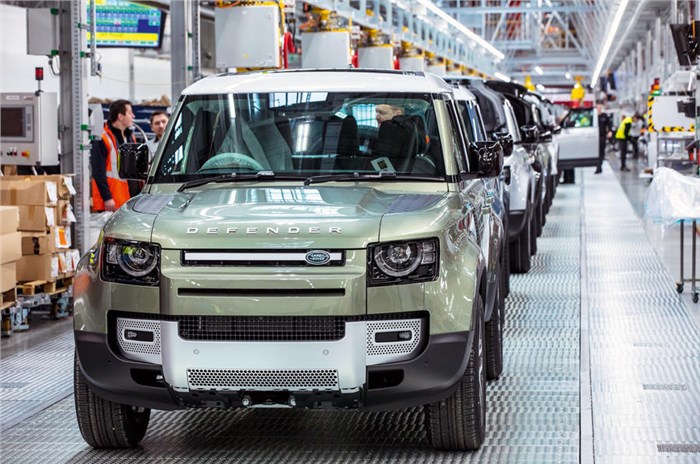 When production of the Defender ended in 2016, it felt like the end of an era. Never before had such an impressive send-off been organised, as the world’s press gathered at Jaguar Land Rover’s Solihull plant to watch the last example roll off the line after 68 years of production.

Four years later and following much hype, the all-new Defender is here, billed to be as tough as ever but with on-road comfort too. And it’s being built at a new plant in another country: Slovakia.

The factory in Nitra has been up and running since October 2018, when it began building the Discovery, which also relocated from Solihull. A bit like Nitra’s operations director, in fact: Russell Leslie is a friendly Brummie (someone from Birmingham) who moved to Slovakia after 26 years working around the world for JLR, including managing the Defender line. He explains that getting production moving at Nitra was easier than usual, because the Discovery already had an established engineering process, but now the real challenge begins: “The eyes of the world are on us. We’re hugely proud to be building the Defender.” 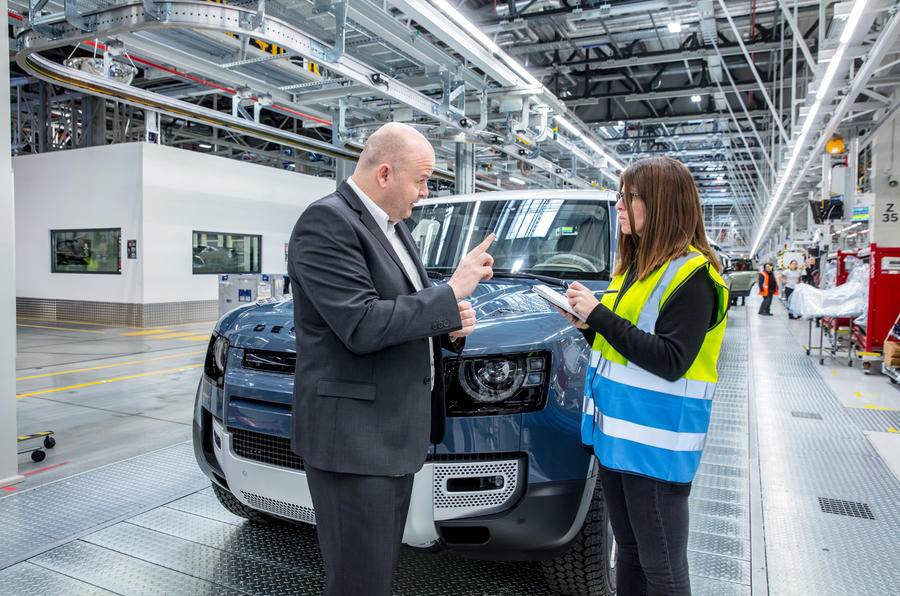 Of course, some purists cried foul that the new model isn’t being built in Britain. Leslie comments: “We’re on a global expansion journey. We’re committed to the UK as our design and engineering base. We needed to find space in the factories in the UK for future products and therefore there was a need to move. And actually this [plant] gives us access to markets we didn’t have before, and it helps with currency fluctuations.” 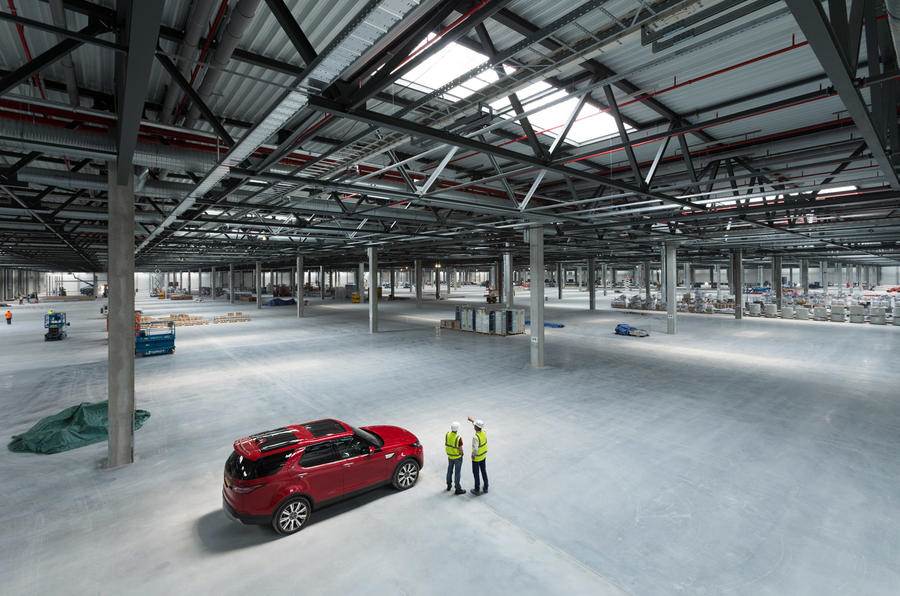 At two million square feet, the purpose-built facility is almost twice the size of the Solihull plant and has clearly been a boon for the area; miles of perfectly smooth new roads lead here, passing a host of supplier factories. The figures back it up: local unemployment has fallen drastically. JLR employs 2,800 people, more than a third of them women – unusually high for a vehicle plant. Its processes were ergonomically designed, it says, so 97 percent of people can do the job. 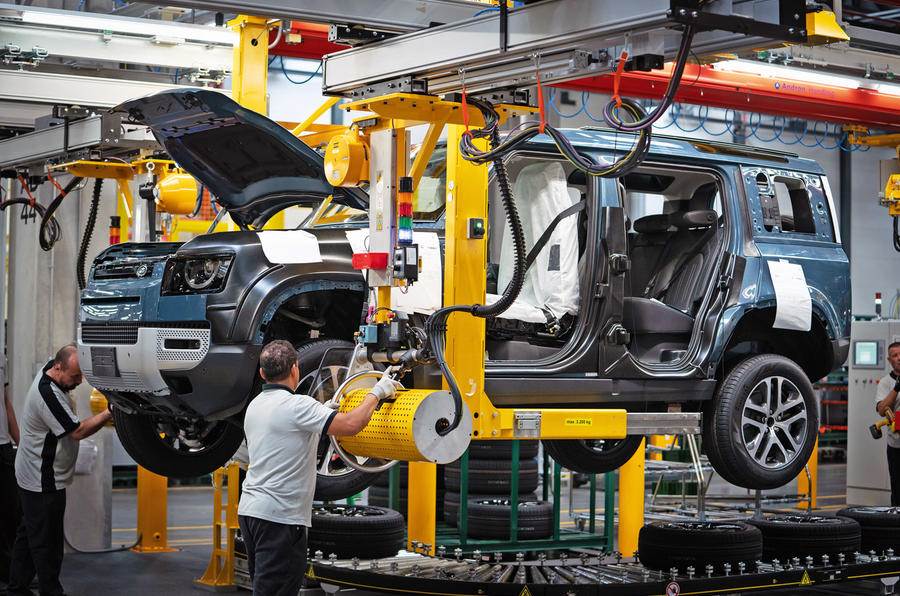 Nitra is able to build 150,000 Defenders and Discoverys per year.

Nitra has an annual capacity of 1,50,000 cars; last year, around 38,000 Discoverys came off the line, plus up to 2,000 Defenders. JLR won’t comment on volume predictions, but the fact the site is at just a quarter of its capacity suggests there’s an awful lot resting on the new Defender.

Leslie says: “We always build facilities with a three-shift capacity [there are two shifts at present]. You have to design a facility to enable a certain jobs-per-hour rate. We have what we believe we need for both today and tomorrow.”

As well as the Discovery, Nitra is set up for the 90 and 110 wheelbases alone, but a family of Defenders is coming. Due in the next few years is a Mercedes-AMG G63-rivalling luxury model, the 130. This will be crucial in creating a cost-effective and profitable model line – a feat the previous generation failed to achieve.

The Discovery and Defender run on the same line, back to back, and there’s total flexibility on how many of each is built. Leslie explains: “There are nuances of the cars being slightly different. For example, we purchase the Discovery’s tailgate and make the Defender’s tailgate. But in general, we drive for a standard process in order to drive efficiency on the manufacturing lines. We put the seats in both cars in the same station, for example.”

This high-tech site is a world away from the line in the West Midlands, but what are the main differences in producing the old and new Defender? 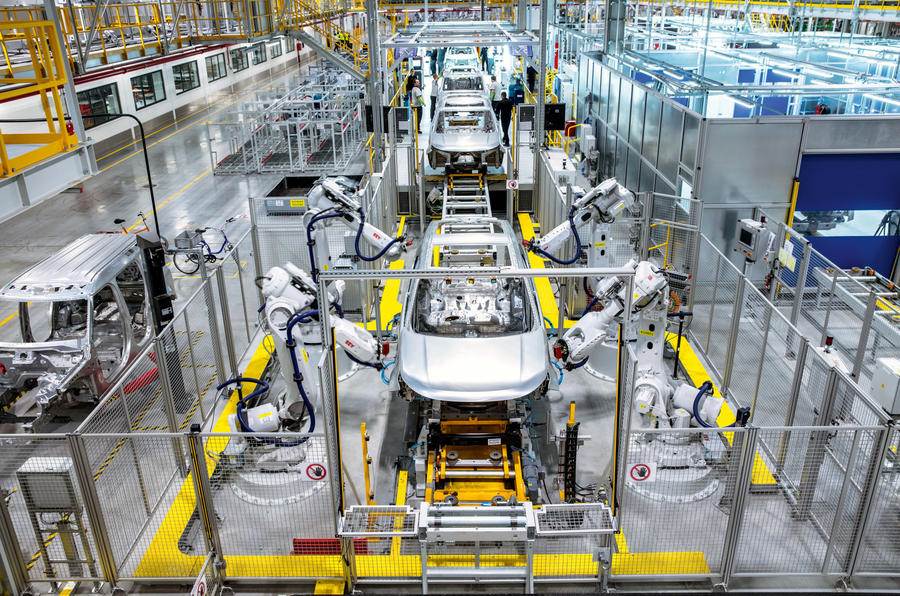 There are 642 robots employed in the bodyshop alone.

“The technology is significantly different,” explains Leslie. “We build both Defender and Discovery in a bodyshop with 642 robots. I don’t know how many we had in the Defender bodyshop back in the day, but it was probably single figures.

“There’s a highly technical paintshop now with environmentally friendly kit and the trim hall is worlds apart from the one I used to run back in Solihull. All in all, [the old and new production lines] are almost like chalk and cheese.”

Among a number of firsts for JLR in Nitra is an innovative conveyor belt, running through the bodyshop, that’s most easily explained as using similar technology to a maglev train. This marks the first European use of the Kuka Pulse, which is claimed to move parts 30 percent faster than traditional setups, able as it is to run at a hasty 3.7m per second. 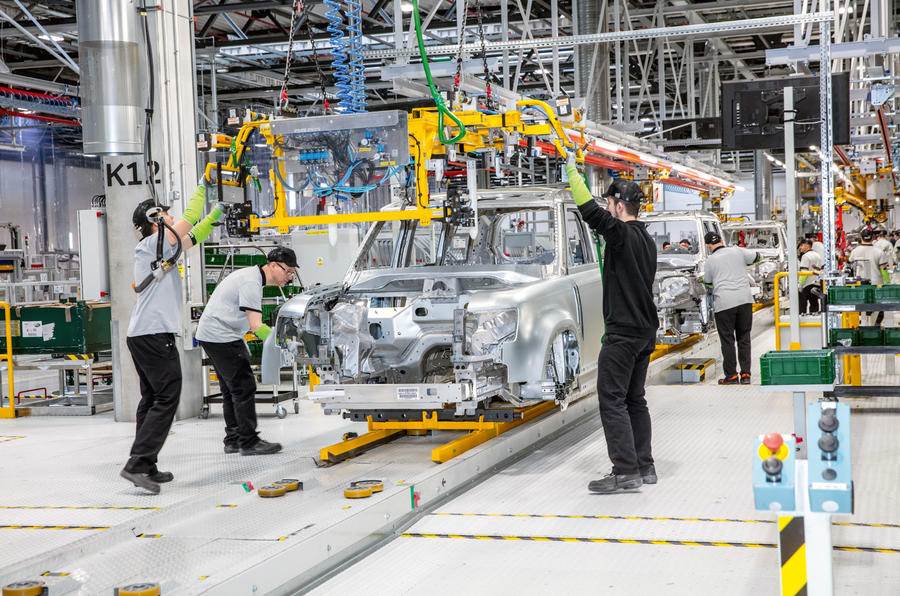 The system helps to transport 400 parts that together form the shell of the car. The first major step is assembling the underbody, body sides and roof header, creating a box that’s instantly recognisable as the Defender. Bodyshop director Christian Classon says: “Everything here has to be perfect to half a millimetre of accuracy. It takes two minutes to put a bodyshell together.”

To achieve the required stiffness in the aluminium structure (and this Defender is claimed to comfortably be the stiffest Land Rover yet), 3,600 rivets are used, plus 170 metres of glue. Classon comments: “The beauty of building an aluminium structure is that it’s cleaner and quieter than welding shops. But riveting is very sensitive; it’s not as forgiving as the welding process.”

The only human-led part of the bodyshop is the cladding line, on which the doors, fenders, bonnet and boot door are applied. Finally, the car goes to be checked. “There are three stations to rectify any issues,” says Classon. “In the UK, the line is much longer, so we’re proud because we have to get it right first time.” 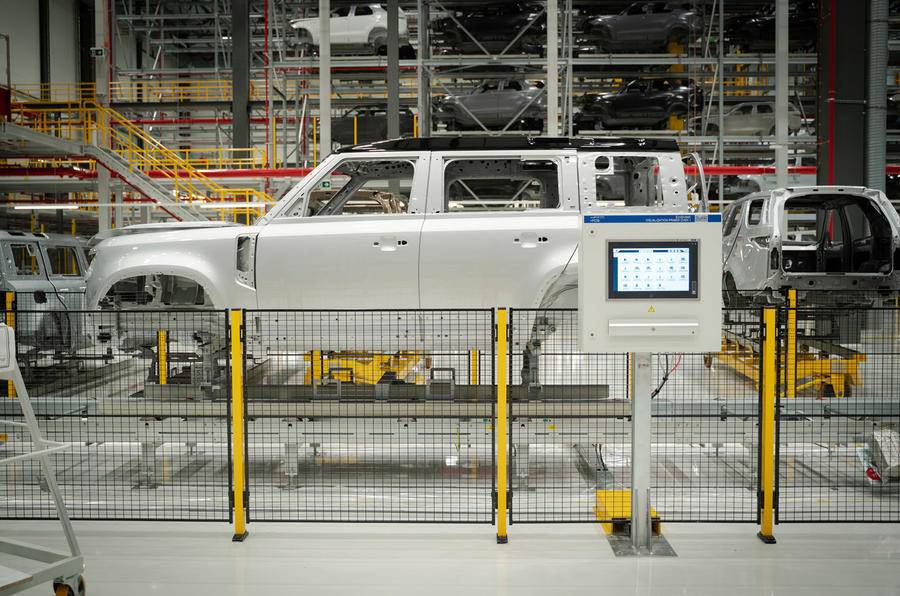 A short production line means that everything has to be got right first time.

Bypassing the paintshop, it’s time to head to the trim and final hall – easily the largest, at 1,34,000 square metres. The first job here is removing the vehicle’s doors so that workers can easily fit the interior. But far more mesmerising is a glass-fitting robot that lifts, glues and places a sunroof in less than a minute.

Trim and final director Ulas Bagci walks us through the major stages, including where the engine and radiator are fitted. “This is where the body finds its soul,” he says.

At each of the 250 stations in his hall, there’s a subtle yellow cord. Pull it once if you need help from your teamleader, twice to stop the line. “Stopping a line when you have two minutes per job is very serious,” warns Bagci. But the biggest challenge of the build process, he says, is “bottlenecks in electronics because of its complexity. Everything is electronic.”

Leslie concludes: “Launching a new car is always an experience. Launching it in a new country with a new team? It’s a bumpy road. You learn lessons as you go. The Defender was designed and engineered in the UK, but this is the first time we’ve put a new car into a new factory. But we’re on target; we’re on the ramp-up curve exactly where we should be.”

As our tour ends, hundreds of workers arrive for the shift change, fresh off seven buses paid for by JLR. There’s not yet public transport to get workers to the site. Conversations are ongoing with the local council to rectify that.

The automotive impact on Slovakia

What comes to mind when Slovakia is mentioned? Maybe beer or castles, but probably not the car industry. Yet, remarkably, since 2007, this central European country has been the world’s biggest producer of cars per capita. Last year, 202 cars were produced per 1,000 inhabitants, with a total of 1.1 million vehicles built. 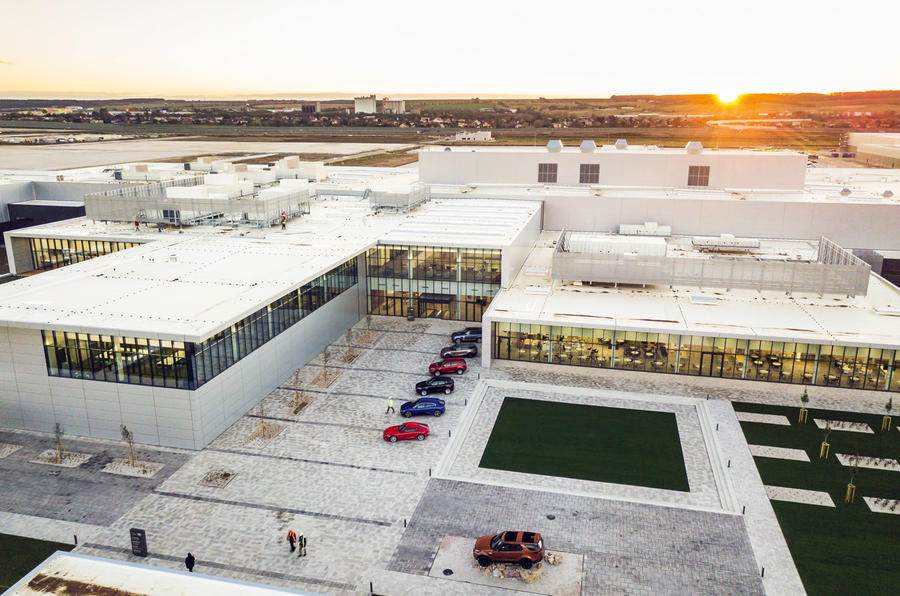 The overwhelming majority of workers at Nitra are Slovak.

Alongside Jaguar Land Rover, other big players include Kia, the PSA Group and the Volkswagen Group, which builds the Volkswagen Up and luxury SUVs, including the Audi Q7 and Porsche Cayenne, there.

Once an agricultural country, Slovakia can now thank vehicle makers for half of its total industry.