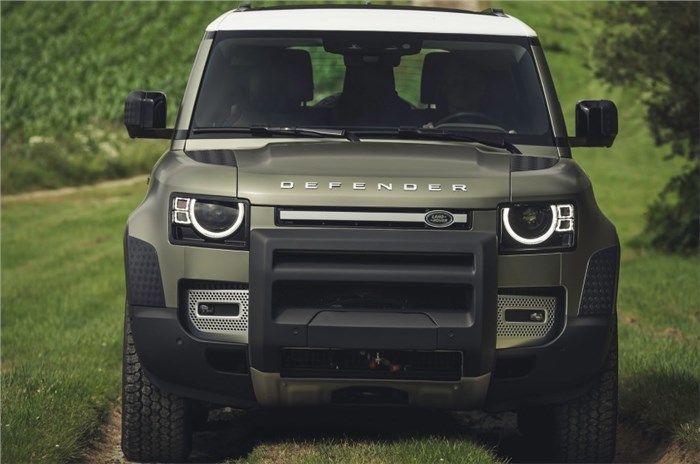 Having debuted the Defender globally last year, Land Rover is now working on a new rang-topping V8-powered iteration of the rugged SUV. Images of an undisguised Defender test mule with quad tailpipes – usually reserved for JLR’s V8 models – have surfaced online, hinting at the development of the V8 model.

Sources close to the firm have confirmed to our sister publication Autocar UK the project’s existence, but the official JLR response is: “We are unable to comment on the specific nature of these [technology development] programmes.”

However, production of the long-serving AJ will come to an end before this year is out, with JLR expected to move to using BMW-sourced 4.4-litre twin-turbo V8s under a wide-reaching powertrain deal struck between the two firms. This alliance began with the intention to develop electrified powertrains, but sources close to the German manufacturer revealed last year that it had been extended to include supplying JLR with a range of internal combustion engines.

Although the use of the 4.4-litre V8 has yet to be officially confirmed by JLR, Autocar UK understands that it’s merely a formality.

It’s plausible that the 5.0-litre engine is being used primarily to test the Defender’s dynamic responses with the weight and power increases.

The V8 Defender is expected to be a low-volume special variant rather than a series-production mainstay. Land Rover may well be stockpiling the Ford-built V8 for use in the Defender, because emissions targets are much less of a priority for low-volume specials.

Interestingly, as per sources JLR’s Special Vehicle Operations (SVO) division isn’t directly involved with the project; instead, it’s an offshoot of the existing Defender engineering operation.

It’s likely, then, that the engine won’t offer as much firepower as full-on SVO cars, such as the 575hp Range Rover Sport SVR, though it is expected to be tuned to near the 500hp mark. Gearbox duties are likely to be handled by an 8-speed automatic unit supplied by ZF. These figures could make it a potent rival to the Mercedes-AMG G63.

JLR engineers have previously hinted to our sister publication that the G-class was used as a benchmark for higher-end Defender variants and, with the hot G63 making up a high proportion of G-class sales, it’s only natural that the British manufacturer would want to cash in on the sector.

Either way, chassis revisions will be required to ensure the V8 Defender is capable of handling such power. The Defender’s aluminium-intensive body structure, said to be the stiffest Land Rover has ever produced, provides a strong base for engineers.

Expect the quad-exhaust system to make production, along with the usual larger wheels, lower ride height and subtle non-SVR body add-ons necessary to mark out the V8.

The V8 Defender is likely to make its debut late next year, with JLR currently prioritising the development of its hybrid and new series-production models.

Earlier this year, Land Rover opened the order books for the Defender in India, along with revealing prices for the variants and derivatives going on sale in the country. The SUV in India is available in both three-door 90 and five-door 110 body styles, in a choice of five variants and with only a 300hp 2.0-litre petrol engine on offer. Read more here.