British automaker will initially focus on the 5-door Defender 110 to make up for COVID-19 related delays. 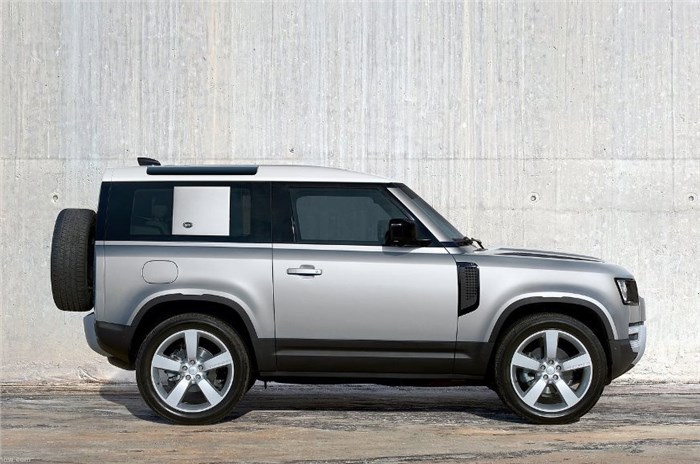 Land Rover revived the Defender nameplate in September last year by unveiling the iconic off-roader in an all new avatar at the 2019 Frankfurt motor show. Since then, pricing for the highly anticipated SUV has been announced in numerous markets across the globe, including India. However, Land Rover has acknowledged that the coronavirus pandemic will have an impact on its planned roll-out schedule.

Defender 110 to be launch vehicle

Speaking at a Tata Motors’ earnings call, Adrian Mardell, chief financial officer, Jaguar Land Rover (JLR) revealed that the company has chosen to contain all orders for the 3-door Defender 90 for the time being. “We’ve actually put on pause the Defender 90, because we’re making sure that the (5-door) 110 gets an appropriate launch,” said Merdell. He later confirmed the company will “open up the Defender 90” later in the second quarter (July-September) of FY21.

The coronavirus pandemic has brought disruptions both on the production and retail side for Jaguar Land Rover. Manufacturing at the Defender’s 150,000 unit plant in Nitra, Slovakia was halted for about eight weeks until the end of May 2020 and lockdowns the world over also meant the SUV didn’t have all-important dealership level launches.

Despite the challenges, Mardell revealed that the Defender has bagged more than 22,000 orders. “We have got more than three months forward cover. And bear in mind, we haven’t had one dealer launch yet. So, we’ve really sold this off our virtual events,” he said.

In a development that is sure to reflect in the order numbers swelling, JLR dealerships across all regions are resuming business, with 89 percent of the company’s retailers being fully or partly open. The company reports that all of its showrooms in China are open, with the number of operative dealers in Europe also on the rise.

Land Rover India opened its order books for the Defender earlier this year. Priced at Rs 69.99-87.10 lakh (ex-showroom, India), both the short- and long-wheelbase versions of the off-roader were available to book with a 300hp, 2.0-litre turbo-petrol engine being the sole engine on offer here. However, dealer sources have confirmed bookings for the Defender 90 have been put on hold and will likely reopen only from September. Consequently, deliveries for the 3-door version also stand to get delayed by a few months. Deliveries for the larger 110 will commence in August 2020, as per the original timeline.