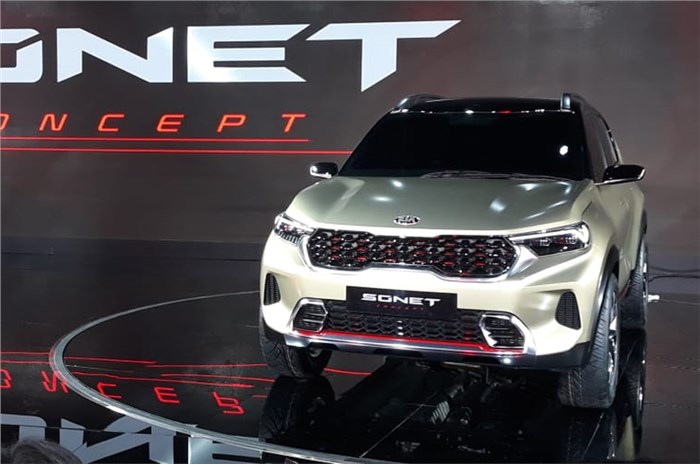 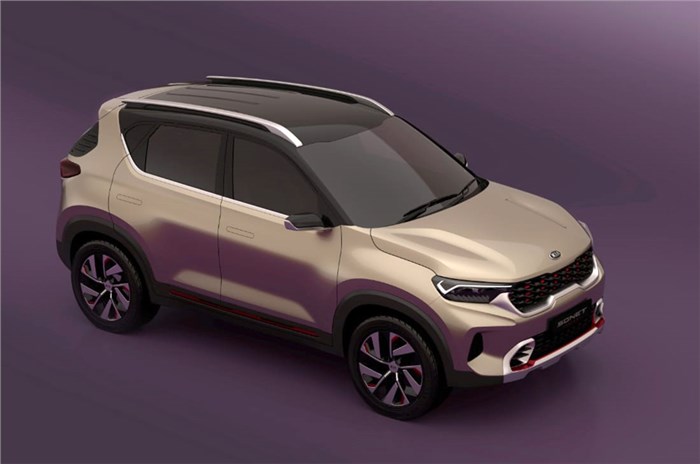 Korean carmaker Kia has taken the wraps off its Sonet compact SUV concept at the ongoing Auto Expo in Greater Noida. The Sonet concept previews a production-spec, sub-four-metre SUV (codename: QYi) that will join Kia’s line-up around August.

The Kia Sonet shares its underpinnings with its distant cousin from Hyundai, the Venue. However, the carmaker has gone the distance to ensure the two SUVs will not be confused for one another. The Sonet receives bespoke exterior and interior styling to make it look more striking and curvaceous. Up front, the compact SUV wears Kia's signature ‘tiger nose’ grille with a mesh pattern and a pinched profile in the middle. Below this is the central air dam flanked by matte-silver fog lamp inserts and large air vents. Kia has decided to avoid going down the split headlamp route and has instead used sleek headlights with integrated LED DRLs merging into the grille. A high bonnet with muscular creases adds to the chunky look.

The side profile of the Sonet is marked by large, dual-tone alloy wheels, prominent wheel arches and a window line that sharply rises at the C-pillar. A pair of roof rails, and contrast-coloured roof and wing mirrors are other notable styling cues.

At from the rear, the Kia looks radical, especially with elements like a backward sloping C-pillar merging with a sharply raked rear windshield. The width of the SUV is accentuated by an LED light bar connecting a pair of sweptback tail-lamps.

Moreover, the black body cladding at the front, rear and sides gives the SUV a hint of rugged appeal. Kia has also made use of red accents at the front splitter, door sills, and alloy wheels, all of which point towards the possibility of a sporty GT Line trim in the production-spec model, just like the Seltos. The Sonet has even been spied in its road-going avatar in South Korea, which confirms a number of design details that can be expected in the final model.

The edgy styling continues in the cabin as well. Prime real estate on the dashboard is taken up by a large 10.25-inch touchscreen infotainment system. When it goes into series production, expect the compact SUV to carry forward a smartly laid-out cabin loaded with equipment, including a Bose sound system, front ventilated seats and UVO connected car tech. Cabin room will likely be similar to the Venue's, but down on class-best standards.

In terms of powertrains, the final production version of the Sonet will mirror the options available with the Venue. These will include a 1.2-litre petrol, a 1.0-litre turbo-petrol, and a 1.5-litre diesel engine. Transmission duties will be handled by a manual and a iMT (AMT automatic) gearbox. Kia insiders also tell us the SUV will have a sportier suspension setup than the Hyundai Venue.

When launched in the second half of 2020, the production-spec Kia Sonet compact SUV is expected to carry a sticker price of Rs 7-11.5 lakh (ex-showroom). Aside from the Hyundai Venue, the Kia Sonet will also have to see off a whole lot of rivals including the Maruti Suzuki Vitara Brezza, Tata Nexon, Ford EcoSport and Mahindra XUV300.

Kia has gone on to dominate the midsize SUV segment with the Seltos, and will be hoping to repeat the success in the compact SUV segment. The first signs sure are positive. If you'd like to know more about Hyundai's second-gen Creta, click here.

What do you think of the way the Kia Sonet looks? Let us know in the comments section below.