Along with the revealing prices for its Toyota Innova Crysta rival, Kia will also showcase a near-production version of its upcoming compact SUV at the 2020 Auto Expo. 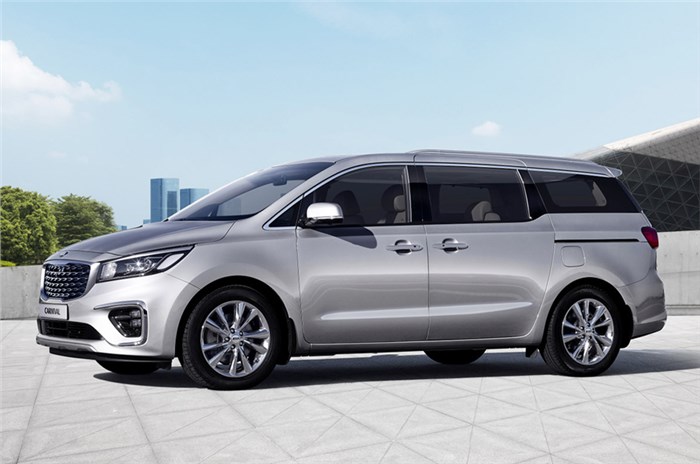 Kia Motors India has confirmed today that its new Carnival MPV will be launched at the 2020 Auto Expo, which will begin on February 5, as we’ve been reporting. While the event’s doors will only open to the public on February 7, the two days prior are press days for select media only.

Expected to be priced a bit higher than the BS6 Toyota Innova Crysta (especially in diesel form), the Kia Carnival is a slightly larger and far more premium MPV.

A number of details regarding the Carnival are now common knowledge – it’ll be available in seven-, eight- and nine-seat configurations, it’ll get a 2.2-litre diesel engine, along with a rear entertainment setup that includes two 10.1-inch screens.

Earlier this morning, some more details about the MPV had surfaced including the output of the diesel unit, the 8-speed automatic gearbox, its boot size, features that will be available with the top-spec versions and more.

While a price tag of around Rs 30 lakh (estimated, ex-showroom) may seem on the higher side, do note that prices for the Innova Crysta – which currently retails at Rs 15.13-21.23 lakh* for the petrol versions and Rs 15.87-22.63 lakh* for the diesel models – will increase when the MPV gets BS6-compliant engines, especially the diesel.

Select Kia dealerships have begun accepting bookings for the Carnival, though bookings will officially open in the coming days.