The C3 will be the first model under Citroën’s C-Cubed programme for emerging markets like India and South America.

Citroën has officially teased its upcoming entry-level model for India a day before its global unveiling. Internally codenamed the CC21 - and likely to be called the C3 in production-spec - this will be Citroën’s first mass-market, made-in-India global product that will also replace the current-gen Citroën C3 crossover sold abroad.

The first official teaser only partly reveals the front fascia of this compact SUV and it is typically Citroën. Just like the C5 Aircross, the face is characterised by a split-headlamp setup connected by a sleek grille neatly incorporating the Citroën logo. In fact, the grille seamlessly merges with the LED Daytime Running Lamps, which is a nice touch.

Although we have already seen the final design of the C3 as it was leaked in the form of a promotional scale model earlier. What makes the C3 stand out are Citroën’s typical quirky design bits. It features an upright design, with a flat bonnet and a highly-raked windshield.

It gets heavy body cladding all around, a contrasting roof, orange accents on the bumper and side cladding and blacked-out pillars and roof rails. The rear is characterised by a clean upright tail gate with rectangular tail-lamps on each end and a dual-tone bumper.

The interior of the C3, however, is still under wraps and will be unveiled tomorrow. Expect the quirky design theme to continue on the inside, with some resemblance to the larger C5 Aircross as well. Features and equipment are expected to be on par with rivals in this segment.

The Citroën C3 is based on the CMP modular platform that will underpin other vehicles, including a sub-four-metre SUV from sister-brand Jeep. The platform has been heavily localised for India and Citroën is expected to position the C3 quite aggressively in its segment.

The C3 will be the first model in the C-Cubed programme that was announced earlier by the French brand. This programme will cater to cars built for emerging markets like India and South America, to name a few.

The C3 will be powered by a 1.2-litre turbo-petrol engine mated to a 5-speed manual gearbox. There are also talks of a DCT-automatic gearbox for this model. As mentioned earlier, the C3 will not come with a diesel engine.

As Citroen’s entry-level car in India with high levels of localisation, the C3 is expected to be priced competitively. In that regard, it will rival models from the lower-end of the compact SUV space like the Renault Kiger and Nissan Magnite along with a few hatchbacks.

Following its global debut tomorrow, the C3 will enter series production in December this year, with a market launch expected by early 2022. You can visit the Autocar India website tomorrow for a comprehensive coverage of the Citroën C3. 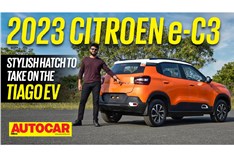