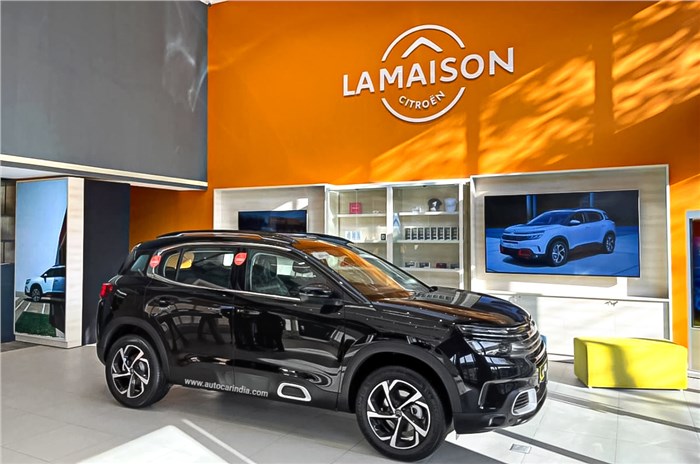 Launched on April 7 this year, the Jeep Compass and Hyundai Tucson rivalling SUV received 1,000 pre-bookings in its first month.

The Citroen C5 Aircross SUV posted sales of 230 units in April 2021. Our sister publication Autocar Professional has learnt that Citroen had produced an estimated 280 vehicles at its plant in Tamil Nadu last month, out of which 230 were dispatched to dealers across India. Having received over a 1,000 claimed pre-bookings for the SUV in its debut month, the automaker will need to ramp up production by three times to cater to the pending orders.

Introduced on April 7, the C5 Aircross has been the launchpad for Citroen in India. The company is banking big on the two key attributes – comfort and design – with its flagship product, which rivals the likes of Volkswagen Tiguan Allspace, Jeep Compass and Hyundai Tucson.

The C5 Aircross is available in a single diesel-automatic powertrain combination. It is powered by a 2.0-litre turbo-diesel engine under the hood that puts out 177hp and 400Nm of torque. The drive is transmitted to the front-wheels via an 8-speed automatic gearbox.

Backing up the company’s focus on comfort, the C5 also gets Citroen’s ‘Progressive Hydraulic Cushion’ equipped suspension system that is claimed to provide a supple ride.

The C5 SUV is being assembled from CKD (completely-knocked down) kits at the company’s 1,00,000-unit annual capacity plant in Thiruvallur, near Chennai.

In its first phase, Citroen India has set up a retail network of 10 'La Maison Citroen' showrooms in key cities including Delhi, Gurgaon, Ahmedabad, Mumbai, Bangalore and Chennai. While the remaining outlets are located in Hyderabad, Kochi, Pune and Kolkata, the company is also emphasising on digital sales, to cater to customer needs, especially during the pandemic.

Though it may have introduced the C5 with a sole diesel powertrain, going forward, Citroen is focused on introducing petrol-only engines when it enters the mass-market segment with its ‘C-Cubed’ strategy that aims to roll out one new model every year for the next four-five years in the country.

To begin with, Citroen will take the covers off its first made-in-India product – a version of the C3 – later this year. The carmaker is targeting localisation levels of up to 90-95 percent for the sub-four-metre model.

The Citroen compact SUV’s design has already been leaked online and the model seems to conform to the company’s quirky design language. When launched, the model (known by its internal codename: C21) will take on the likes of the Nissan Magnite, Renault Kiger, Maruti Vitara Brezza, Hyundai Venue, Kia Sonet and the Tata Nexon in our market.