Of the existing the 16 UV makers in the Indian market, Hyundai and MG are the only two to have increased their sales volume in the April-July 2019 period. 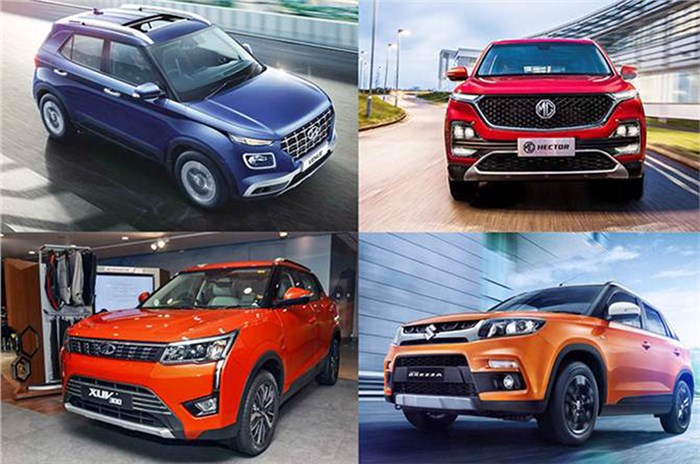 July 2019 was the 10th straight month of declining sales and the utility vehicle (UV) segment was down 15.22 percent year on year (YoY) to 67,030 units, contributing to the decline of the overall passenger vehicle (PV) segment which lunged by a startling 31 percent to 2,00,790 units.

But a slowing market can also see action and Hyundai Motor India seems to be in the thick of the utility vehicle (UV) segment. For the April-July 2019 period, the first four months of FY2020, the Chennai-based automaker has sold a total of 60,191 units, which marks a handsome 41.31 percent year- on- year growth (April-July 2018: 42,595). Put it down to the growing demand and dispatches for the new Venue, Hyundai's first-ever compact SUV.

On July 30, Hyundai announced it crossed the 50,000-unit bookings mark for the Venue since the SUV's launch on May 21, adding that it had delivered 18,000 units of the SUV. As per industry sales data, the company despatched 7,049 units in May and another 8,763 units in June, totalling 15,812 units. This means that an additional 2,188 units (and counting) have also been delivered since.

The Venue drove into the Top 5 best-selling UVs chart both in May (in fourth place) and June, when it came tantalisingly close to going past the No. 1 UV, the Maruti Suzuki Vitara Brezza. Expect it be the new No. 1 UV for July 2019, unseating the Vitara Brezza, which is the longstanding UV champion.

The robust numbers for the Venue give Hyundai a strong 7.1 percentage point increase in its market share to 20.67 percent, from the 13.57 percent in April-July 2018.

Meanwhile, MG Motor India, which entered the Indian automobile market with its Hector SUV, has opened its market share account with 1,508 units in July 2019, which gives it a UV market share of 0.52 percent and a 0.17 percent share of the passenger vehicle market. The MG Hector is the launch pad for an all-new brand in India and the impression it makes will set the tone for how the brand is perceived henceforth. Well, that first impression seems to have been a strong one, because the Hector managed to rack up over 21,000 bookings in just six weeks after its launch, and bookings for the SUV have been put on hold for now.

In fact, Hyundai Motor India and MG Motor India are the only two of the 16 UV makers which have increased their sales volume in the April-July 2019 period.

UV market leader Maruti Suzuki India, which is experiencing the toughest period in its 36-year history, sees its UV market share reduce to 25.46 percent from 28.75 percent in April-July 2018. The sharp fall in demand for its bestseller the Vitara Brezza is the reason for the 17.83 percent decline in volumes to 74,162 units from the 90,259 units in April-July 2018.

Maruti Suzuki is currently in the final stages of readying a petrol-powered Vitara Brezza for the Indian market. The current-gen Vitara Brezza SUV has been on sale since 2016, with just a single diesel engine option mated to either a 5-speed manual or an AMT gearbox.

That brings Mahindra tantalisingly close to unseating Maruti as the UV market leader. Although M&M sold 72,098 units in April-July 2019, 1,855 units less than the 73,953 units in April-July 2018, its market share has grown marginally to 24.75 percent – just 0.71 percent short of the UV boss. August 2019 could see a new market share leader! Remember, you read it here first.

August 22 will see the official launch of the high-on-connectivity and feature-laden Kia Seltos, which promises to be the UV game-changer. Production rollout of Kia Motors' first made-in-India product took place on August 8, 2019. Now SUV aficionados - and UV rivals alike, await the Seltos pricing with bated breath. There are exciting times in store for the UV front. Stay tuned. 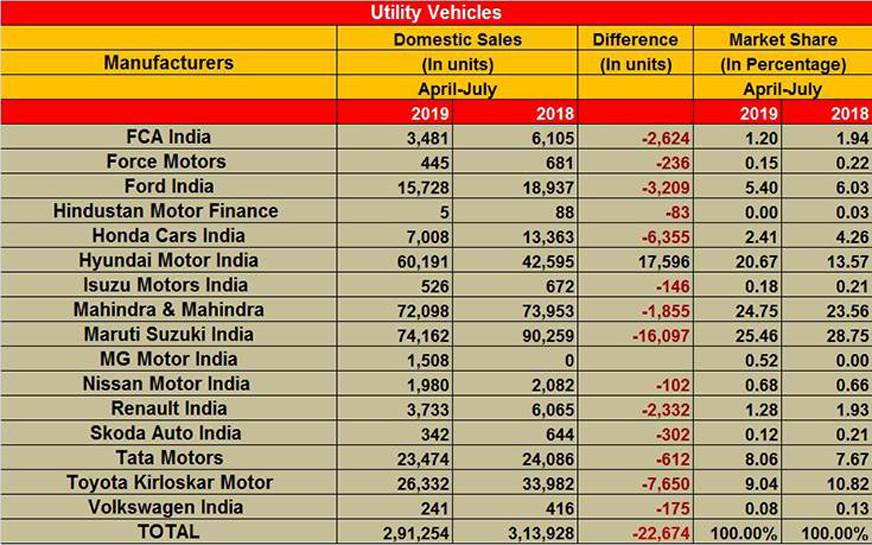