The new Defender has been spotted completely undisguised on the set of latest James Bond movie titled No Time to Die. 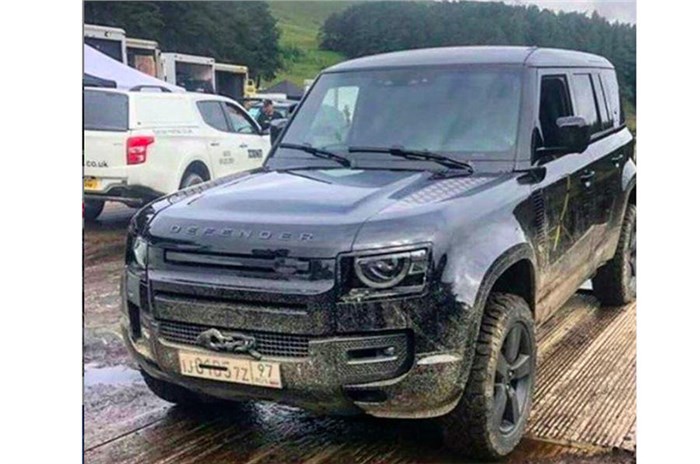 Land Rover is readying the 2020 Defender for its hotly anticipated unveiling at September's Frankfurt motor show, but the model has already been spotted without camouflage for the first time.

A photo reportedly taken from the set of 'No Time to Die' - the latest instalment in the James Bond film series - shows the Defender without its now-familiar pre-production livery.

The Defender in the image sports a number of off-road-oriented modifications, such as a bumper-mounted winch, chunky off-road tyres and a protective chequer plate on the wings. It also seems to sit higher than the prototypes we've seen before, suggesting the addition of an aftermarket off-road suspension kit.

Despite wearing a thick layer of mud around the bumpers and side skirts, the film car previews various aspects of the production car's design, such as the headlight clusters, grille design and air intakes.

A couple of months back, there were some additional details about the next-gen Land Rover Defender that had leaked online. According to this information, the new Defender will be offered in three different lengths, which include a three-door 90 version, a five-door 110 version and a larger five-door 130 version. Each version will be offered in a range of seating configurations, with the 90 being offered as a five- and six-seater, the 110 coming as a five-, six- and seven-seater, and the largest one, the 130, offered only as an eight-seater.

Last month, Land Rover released images of a Defender prototype being assessed on Dubai's sand dunes and highways under the supervision of off-road experts from the International Federation of Red Cross and Red Crescent Societies (IFRC). We had also previously reported that the next-gen Land Rover Defender had completed 1.2 million kilometres of testing at the Tusk Trust's 1.4 lakh sq m reserve in Kenya.