Volkswagen is aiming even higher than Skoda which currently sells around 3,000 units of the Kushaq each month. 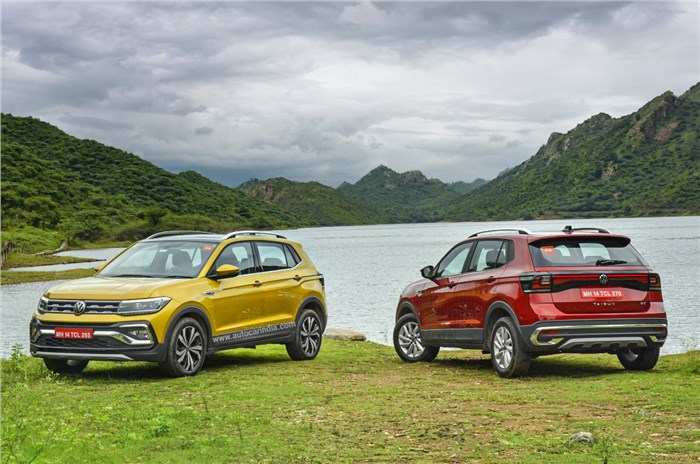 The Volkswagen Taigun will be launched on September 23, and as one of the first products out of the VW Group’s ‘India 2.0’ strategy, it will be tasked with providing the company a fresh charge in our market. No wonder, then, VW has high hopes from the upcoming SUV. “I am very confident that we will be able to do 5,000-6,000 units of the Taigun a month,” said Ashish Gupta, Brand Director, Volkswagen Passenger Cars India, in an interview with Autocar India.

VW has bigger ambitions than Skoda

With its current sales target, VW is aiming higher than even its sister company, Skoda, which, as per the Czech brand’s sales chief, Zac Hollis, is gunning for 3,000-4,000 units of the Kushaq each month in 2021.

The Kushaq was launched towards the end of June this year. With deliveries of the 1.0-litre turbo-petrol variants commencing in July, Skoda managed to sell 1,822 units of its SUV. Having introduced the 1.5-litre variants for customers in mid-August, the company achieved 3,000 sales of the Kushaq last month.

Sharing its platform, running gear and various other elements with the Kushaq, the Taigun is poised for a second mover advantage then. Volkswagen can be expected to build on Skoda’s experience, which is also reflected in its bolder sales target. However, VW’s projections still remain more conservative than the figures for the Hyundai Creta and Kia Seltos which manage an average of about 11,000 units and 8,500 units of monthly sales, respectively.

In addition to missing out on the diesel segment, the German automaker will also be limited by its network capacity. “The VW network will consist of around 150 touch points by the end of the year, with a selling capacity of 1,00,000 cars annually. That’s is what my network can sell in total, with all models put together. If I have to go above that, then I have to start looking at new touch points,” explained Gupta.

Another reason for VW’s high ambitions is the increasing popularity of the mid-size SUV segment. Elaborating on this, Gupta mentioned, “The mid-size SUV segment has been growing by over 90 percent in the last two years, so it is a huge segment. Moreover, the options available to customers are also limited in this segment.”

For now, the more popular models in the mid-size SUV category include the Hyundai Creta, Kia Seltos and Skoda Kushaq, with the Nissan Kicks and Renault Duster seeing limited numbers. The MG Astor is also set to add to the competition this month. “So, our entry will actually end up growing the segment even more. We are coming into the right segment, with the right product, at the right moment,” said Gupta.

The VW boss also mentioned that following the shock of the second wave of COVID-19, the market has recovered, with a number of factors buoying customer sentiments. “Preferences have changed; the customer behaviour is now more towards personal mobility. The second thing, which is helping us, is finance availability in the market. Liquidity is high and interest rates are at a low,” he said.

He added, “The third thing is that customers are going for multiple cars in their families. I see a drop in replacements happening – selling an old car and buying a new car – but an increase in people buying an additional car. So, that has increased manifold because everybody wants to have an individual car for as many members in their family as they can.”

Shortage of semiconductors has been plaguing automakers since last year, with no respite expected even in the next few months. In addition to crippling production of existing models, the issue has even caused many players to push back new launches.

“This is the main challenge right now. A production facility works on at least a three-month planning stability. Currently, you do not even have a 1 or 2 week stability for planning. So, that is the kind of situation everybody is in. It’s not only with us, but with every manufacturer across the world. There is at least a 30-40 percent shortage (of semiconductors). So, that will be a continuous challenge going forward as well,” commented Gupta.

However, he added that plans for the Taigun remain unchanged, for now. “We have been lucky that we have a global organisation which understands that we are launching a new car, and are ramping up our production. So, the whole organisation has been very supportive in making sure our requirements are prioritised. We have not changed our product plans or variant plans, as such,” said Gupta.