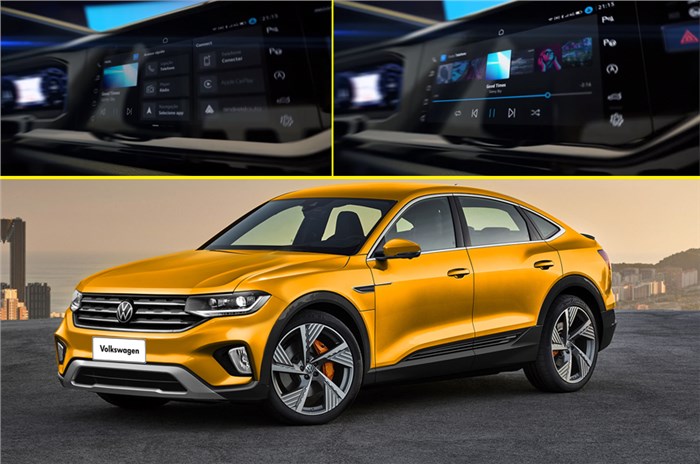 Volkswagen has revealed an all-new “Play” infotainment system for its future models. The new system will first debut on the Nivus, which is actually the four-door SUV-coupé based on the India-bound Taigun.

The company has released a first teaser of the new “Play” infotainment system. This new system will feature an 8.0-inch touchscreen (similar size as the Taigun that made its debut here) and come with an advanced interface, replete with multiple vehicle and driver-function displays. It will also come with connected vehicle tech, Apple CarPlay and Android Auto, along with more inbuilt apps. One of the key features on the VW Play infotainment will be the live streaming of music and audio podcasts via SIM-based internet access (likely to be an eSIM) along with in-car Wi-Fi. The brand is expected to reveal more details of this new infotainment system soon.

The Nivus SUV-coupé (based on the South American-spec T-Cross) is built on the MQB A0 platform tailored for emerging markets – which, in turn, is a version of the MQB A0 IN architecture that will be used for the India-bound Volkswagen Taigun SUV. The Nivus will launch first in the South American market and will also be exported to Europe. The yet-to-be revealed four-door SUV-coupé will share multiple body panels, select engines, seats and even interior bits – like the dashboard, steering wheel and full-digital instrument cluster – with the T-Cross and the Taigun. The Nivus will sit above the T-Cross in global markets and will come with more features like park-assist and a powered tailgate. The SUV-coupé will also feature the new Volkswagen logo that made its debut last year.

While the Taigun SUV shown in India featured the brand’s old logo, we expect the production-spec SUV to come with the brand’s new identity along with the “VW Play” infotainment system when it launches in India sometime next year. Key rivals to the India-bound Taigun in our market include the new Hyundai Creta, Kia Seltos, Tata Harrier, Renault Captur and the Nissan Kicks. Here's what else to expect from The Volkswagen Taigun.