Up to Rs 68,000 off on Maruti Suzuki cars and SUVs this month 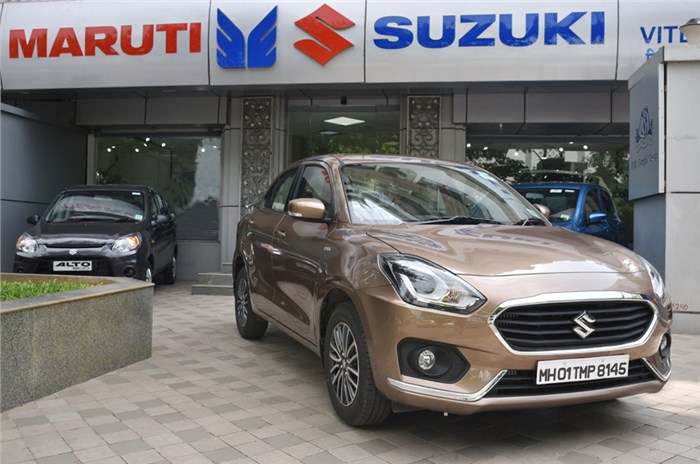 Maruti Suzuki dealerships are providing discounts and benefits across its 2019 model year range of hatchbacks, sedans and SUVs.

Maruti Suzuki dealerships are offering discounts and benefits across its range of vehicles during the month of March, The carmaker's line-up comprises of hatchbacks like the Alto 800, Alto K10, Celerio, Swift and Ignis, SUVs like the Vitara Brezza and S-cross, and sedans such as the Dzire and Ciaz. Interestingly, dealers are not officially offering any discounts on the Maruti Suzuki Ertiga MPV or the new Wagon R. We have compiled a list of the biggest discounts currently being offered on the 2019 model year stock.

Save up to Rs 68,000
The Maruti Suzuki Alto 800 is a budget offering that sells well in part thanks to the reliability and ownership experience associated with a Maruti product. The car is powered by a 796cc, three-cylinder petrol engine that produces 48hp and 69Nm of torque, which is paired to a 5-speed manual. The Alto 800 is also available with a factory-fit CNG kit on the top two variants. The small hatchback is sold via the Arena dealerships and sees discounts and benefits of up to Rs 68,000 being offered on 2019 stock.

Save up to Rs 65,000
The Maruti Suzuki Alto K10 looks different from its 800cc sibling, the Alto 800, and has a more powerful engine. The Alto K10 sports a 998cc, three-cylinder engine that makes 68hp and 90Nm of torque. The Renault Kwid 1.0 rival is also offered with either a 5-speed manual or a 5-speed AMT gearbox. Maruti Suzuki Arena dealers are now offering discounts and benefits up to Rs 55,000 on the manual model and Rs 65,000 on the AMT variants.

Save up to Rs 68,000
The Maruti Suzuki Celerio was the company’s first model to sport an AMT gearbox, bringing the convenience of an automatic at a far more affordable price point. This engine-gearbox combination is found in the smaller Alto K10 and the lower variants of the new Wagon R. The Tata Tiago rival is also available with a factory-fit CNG kit on select models. If you haggle right, Arena dealers could offer more than the quoted Rs 63,000 on the petrol manuals and Rs 68,000 on the AMT and CNG variants.

Save up to Rs 58,000
The Maruti Suzuki Swift is one of the most popular hatchbacks offered by the manufacturer. Known for its sporty nature and reliability, the Hyundai Grand i10 and Ford Figo rivalling hatchback is offered with a 1.2-litre four-cylinder petrol engine that produces 83hp and 113Nm of torque and a 1.3-litre four-cylinder diesel engine that is tuned to make 75hp and 190Nm of torque. Both engines can be had with either a 5-speed manual transmission or a 5-speed AMT. Potential buyers can now avail up to Rs 58,000 on the Swift at select Arena dealerships.

Save up to Rs 38,000
The Maruti Suzuki Ignis has not won over too many buyers partially due to its quirky tall-boy design. It was introduced in 2017 and was aimed towards a younger demographic as it came with a number of personalisation and cusomtmisation options. The Ignis shares its 83hp, 1.2-litre petrol engine and 5-speed manual and AMT gearbox with the Swift. The Ignis, which is sold via Maruti’s premium Nexa dealerships, is currently available with discounts and benefits of up to Rs 38,000 on the 2019 model year stock.

Save up to Rs 68,000
The Maruti Suzuki Dzire is the current segment-leader in terms of sales. The Ford Aspire and Hyundai Xcent rival is known for its spacious cabin and a well-proportioned exterior. The Dzire has the same engine and transmission options as its hatchback counterpart, the Swift, including the diesel-AMT combination, which makes the Dzire unique in the compact sedan segment. 2019 model year Dzires are currently available with discounts and benefits up to Rs 63,000 on the petrol variants and Rs 68,000 on the diesel variants.

Save up to Rs 50,000
A competitor to the likes of the Hyundai Verna and Honda City, the Maruti Suzuki Ciaz received a refresh in 2018 which saw the introduction of the new 1.5-litre, four-cylinder petrol, mild-hybrid engine that produces 105hp and 138Nm of torque. This motor is available with either a 5-speed manual or a 4-speed torque converter automatic transmission. While the midsize sedan is also available with a 90hp, 1.3-litre, four-cylinder, mild-hybrid diesel engine for now, this engine will be phased out soon to make way for a new 95hp, 1.5-litre diesel motor. There are discounts and benefits worth Rs 50,000 available on manual variants of 2019 Ciaz models.

Save up to Rs 50,000
The Maruti Suzuki Vitara Brezza rules the compact SUV segment in terms of sales, bettering figures posted by the Tata Nexon, Mahindra XUV300 and Ford EcoSport. The Vitara Brezza is a practical and spacious model, that is backed by Maruti’s ease of ownership. The compact SUV is only available with the 1.3-litre, four-cylinder turbocharged diesel engine that produces 90hp and 200Nm of torque. The engine is available with both, a 5-speed manual and a 5-speed AMT gearbox. The compact SUV is sold via the Arena dealerships and is currently available with discounts and benefits worth up to Rs 50,000 on 2019 model year stock.

Save up to Rs 55,000
The Maruti Suzuki S-cross was refreshed in 2017, which made it a more credible rival to the likes of the Hyundai Creta and Renault Captur. The crossover has a spacious and well laid out cabin, but lacks a proper SUV-like appeal. On offer with the same FCA-sourced 90hp, 1.3-litre diesel engine with mild-hybrid technology found in the Ciaz and Ertiga, the S-cross is only available with a 5-speed manual transmission. Nexa dealerships are now offering discounts of up to Rs 55,000 on 2019 models of the S-cross.

Bigdiscounts and benefits on Toyota cars, SUVs this month