We compare the new Toyota Glanza and the Maruti Suzuki Baleno to see just how different they really are. 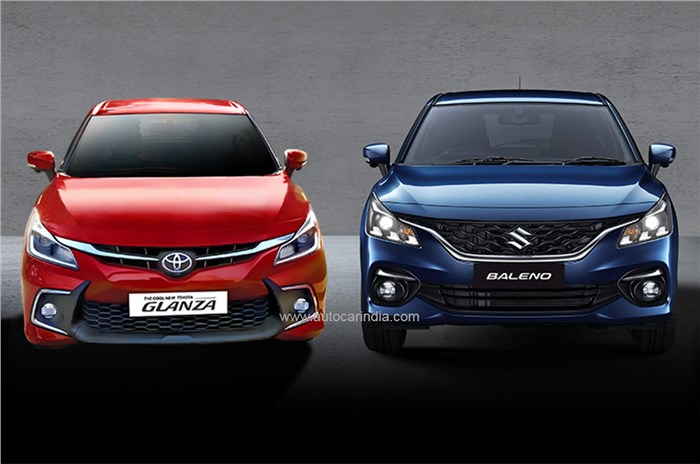 Just a few weeks on from the new Maruti Suzuki Baleno’s launch, Toyota too has introduced its rebadged version of the hatchback – the new Glanza. While the outgoing Glanza could only be differentiated from the old Baleno by its front grille and logo, Toyota has made considerable changes this time around to set it apart from its Maruti twin.

Read on to see how the new Glanza and Baleno differ from each other.

Unlike the outgoing Glanza, which came just in the higher G and V trims, the new Glanza is offered in a total of four trim levels – E, S, G and V, which are in line with the Baleno’s Sigma, Delta, Zeta and Alpha trims. This means the Glanza now has a much more competitive starting price than before (Rs 7.70 lakh for G MT variant).

The new Toyota Glanza is priced from Rs 6.39 lakh-9.69 lakh, while the Baleno is priced from Rs 6.35 lakh-9.49 lakh. The Toyota costs Rs 4,000 to 20,000 more than the Maruti, depending on the variant. It’s also worth noting that prices for the Glanza are introductory and will be hiked in due course.

Glanza vs Baleno: exterior and interior

On the exterior, the new Glanza has a lot in common with the Baleno, much like its predecessor. While the overall proportions and silhouette of the two models are near-identical, Toyota has made significant changes to differentiate the two models this time around. The refreshed Glanza gets a different, Camry-esque front grille, a sportier front bumper, and headlights with different LED daytime running lights (DRLs). The DRLs on the Baleno feature three individual LED elements, while the Glanza’s DRLs are simpler, L-shaped units.

Round the side, the Glanza also gets a different design for the 16-inch alloy wheels. At the back though, both models are near-identical, with the only differentiating factor being the badging. Both hatchbacks are available in Blue, Grey, White, Silver and Red paint shades, with the Baleno also getting the additional option of a Beige colour. 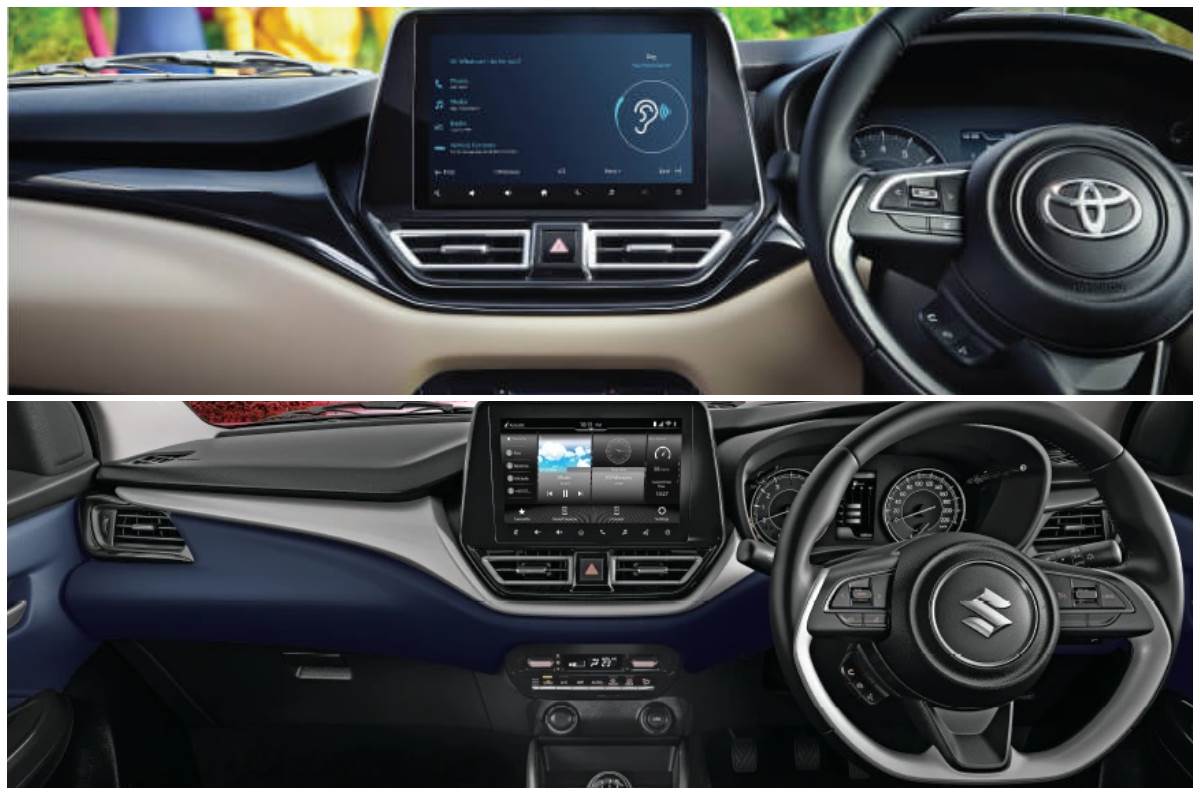 Glanza (top) gets black and beige upholstery while the Baleno (bottom) features a black and blue theme.

Inside too, there are similarities in design and layout between the Glanza and the new Baleno, as both get a layered dashboard, a free-standing touchscreen in the centre and a flat-bottom steering wheel. The big change on the interior, however, is the black and beige colour scheme of the Glanza, in contrast to the black and navy blue combination of the new Baleno. In comparison, the outgoing Glanza’s cabin was identical to that of the Baleno, save for the Toyota badge on the steering.

Glanza vs Baleno: features and equipment

The new Glanza and Baleno are identical in terms of their features list. In their top-spec trims, which is the Alpha for the Baleno and V for the Glanza, both hatchbacks come equipped with a head-up display (HUD), a 360-degree parking camera, a 9.0-inch touchscreen infotainment system with Android Auto and Apple CarPlay connectivity, connected car tech, automatic climate control, rear AC vents, push-button start-stop, auto headlamps and wipers, steering with tilt and telescopic adjustment, six airbags, ESP, hill-hold control, and ISOFIX child-seat mounts.

The new Glanza and the new Baleno share their engine and gearboxes. Both hatchbacks are powered by a 90hp, 113Nm, 1.2-litre, four-cylinder, DualJet K12N petrol engine, which can be had with either a 5-speed manual or a 5-speed AMT automatic gearbox. Incidentally, the Glanza becomes the first Toyota in India to be equipped with an AMT gearbox.

Both hatchbacks also have identical claimed fuel economy figures – 22.35kpl for the manual and 22.94kpl for the AMT auto.

This should sway a number of buyers towards the Glanza than the Baleno, especially considering that the price differential between the two is marginal for now.

The Toyota Glanza and Maruti Suzuki Baleno, both continue to compete in the premium hatchback segment. As such, their rivals include the Hyundai i20, Tata Altroz, Honda Jazz and the VW Polo.

Would you choose the new Toyota Glanza over the new Baleno? Let us know in the comments.