Due to the base E trim, the new Glanza is priced much closer to the Baleno. 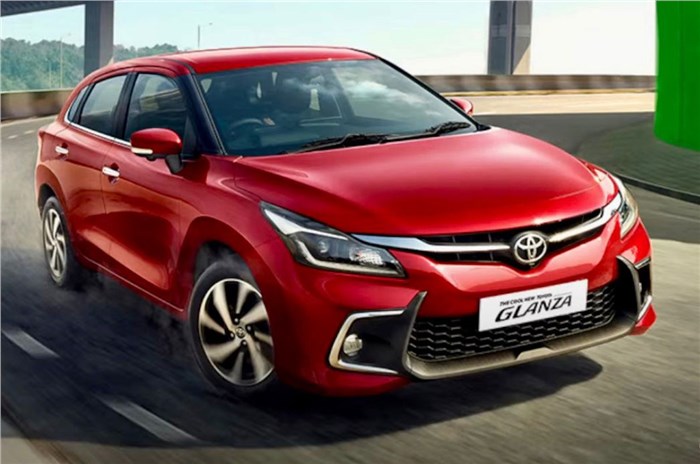 The new Toyota Glanza has been launched in our market, just a few weeks after its sister model, the Maruti Suzuki Baleno was launched. Introductory prices for the Glanza start at Rs 6.39 lakh for the base E trim and go up to Rs 9.69 lakh for the top-spec S automatic trim (ex-showroom, India). Toyota began accepting bookings for the new Glanza last week for a token amount of Rs 11,000 via its dealerships and website.

On the styling front, the new Glanza (like its predecessor) has much in common with the Baleno, on which it is based. While the overall proportions and silhouette of the two models are near-identical, this time around, Toyota has made a more serious effort to differentiate the two models. The refreshed Glanza gets a new Camry-esque grille, a sportier front bumper and new headlights with simpler LED daytime running lights graphics (the three-block DRLs are exclusive to the Baleno).

Inside too, there are similarities in design and layout to the new Baleno, as it also gets a layered dashboard, free-standing touchscreen infotainment system and similar steering wheel design. The big change on the interior is the black and beige colour scheme seen throughout the cabin, which gives it an upmarket look.

Unlike the old Glanza, which came in the higher G and V trims, the new Glanza is offered in a total of four trim levels – E, S, G and V, which closely correspond to the Baleno’s Sigma, Delta, Zeta and Alpha trims. This allows the new Glanza to have a much more competitive starting price than before.

Toyota is offering plenty of kit on the Glanza, as the top-spec variant comes with a head-up display (HUD), a 360-degree camera, a 9.0-inch touchscreen infotainment system with Android Auto and Apple CarPlay support, 'Toyota i-Connect' connected car tech, automatic climate control, steering with tilt and telescopic adjustment and 6 airbags.

An area Toyota hopes to set the Glanza apart is the warranty coverage, which is three years/1,00,000km as standard and can be extended to five years/2,20,000km.

The new Glanza is powered by a 90hp, 113Nm, 1.2-litre, four-cylinder DualJet K12N petrol engine (same unit as the Baleno’s). The engine comes paired with either a 5-speed manual or a 5-speed AMT automatic gearbox. Incidentally, this is also the first Toyota in India to be equipped with an AMT gearbox.

The Toyota Glanza continues to compete in the premium hatchback segment and takes on the new Maruti Suzuki Baleno, Hyundai i20, Tata Altroz, Honda Jazz and VW Polo.