Toyota has filed eight patents for its technology that aims to replicate the 'feel' of driving an ICE manual vehicle in an EV. 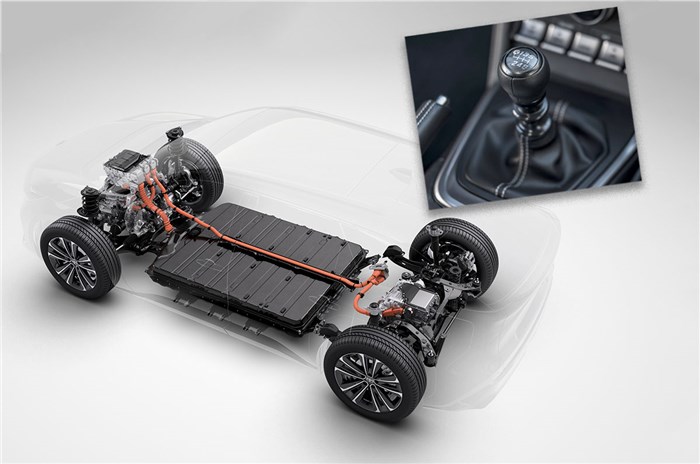 Japanese carmaker Toyota has applied for multiple patents to safeguard its design and technology that looks to achieve a successful marriage between a battery-electric motor and an H-pattern manual transmission with a three-pedal layout.

Toyota’s objective is to replicate the ‘feel’ of driving an internal combustion engine (ICE) manual vehicle in an electric vehicle (EV).

On June 21, 2021, the Japanese carmaker filed a total of eight patents at the United States Patent and Trademark Office. Toyota’s detailed application is now out in public domain, published by the patent office on February 10, 2022; however, the company still awaits a patent on these.

To attain a manual ICE car-like ‘feel’ while driving an EV, the Japanese carmaker has come up with a clever technology that uses an H-pattern manual gearbox and a clutch pedal in an EV to simulate a ‘manual’ drive experience. A ‘controller’ (consider it to be the brain of an EV) captures signals from the pedals (accelerator, brake and clutch), gearbox and wheel speed sensors, and with the help of software, a plethora of other sensors and technologies, it intelligently tweaks the electric motor’s power supply and torque characteristic to the extent that the vehicle feels like it is powered by petrol or diesel.

Throughout the patent application, words like ‘pseudo-gearshift’, ‘pseudo clutch pedal’ and ‘pseudo engine speed meter’ are used to describe the functioning of these mechanisms, which goes to show that these are merely representative and their mechanism and construction is much different from what you will find in ICE vehicles. The document further states that parameters like clutch feel, vehicle stalling, hill-starts and reversing, among others, have also been taken into consideration to offer an experience as close to driving a ‘real’ manual vehicle.

While there’s no question that EVs are the future on account of their zero tail pipe emission advantages, these vehicles aren’t the last word when it comes to driver involvement, despite their torquey character, due to their single-speed reduction gearboxes (or two-speed automatics in case of high performance EVs like the Audi RS e-tron GT and Porsche Taycan).

With the role of manual transmissions being insignificant in the electrified future, it is nice to see Toyota taking strides to appease those who prefer changing gears manually. Sure, with the help of technology Toyota engineers could make an electric vehicle drive experience as close to that of an ICE manual, but there’s one crucial factor that’ll always remain irreplaceable – the aural experience; oh wait, there are already manufacturers who have ‘fake’ exhaust sounds via the vehicle’s speakers.

Didn’t we drive an electric car with a manual gearbox recently?

Yes, we recently drove the Maruti Dzire electric conversion vehicle with a 5-speed manual gearbox. However, the Dzire EV’s manual gearbox is completely different, and is not to be confused with Toyota’s ‘simulated manual’ concept. Northway Motorsport, the company behind the Dzire EV conversion, married the battery-electric powertrain to the 5-speed manual gearbox which already came with the ICE vehicle. While this certainly proves cost-effective for the kit manufacturer, it does come with challenges of its own such as additional weight and additional moving parts which will result in greater mechanical losses as the gearbox is originally designed to support an ICE vehicle.