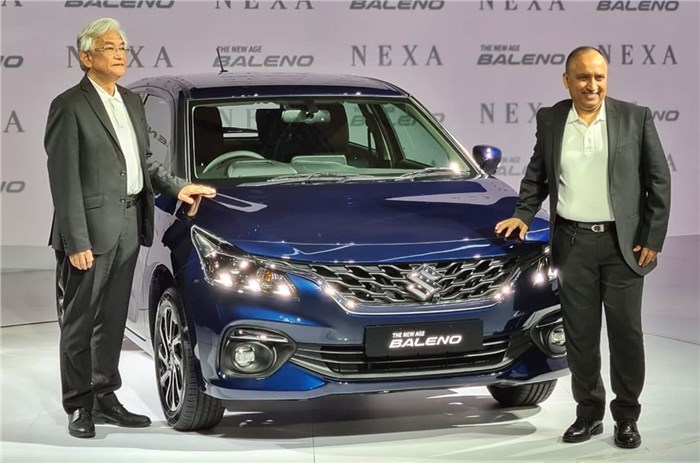 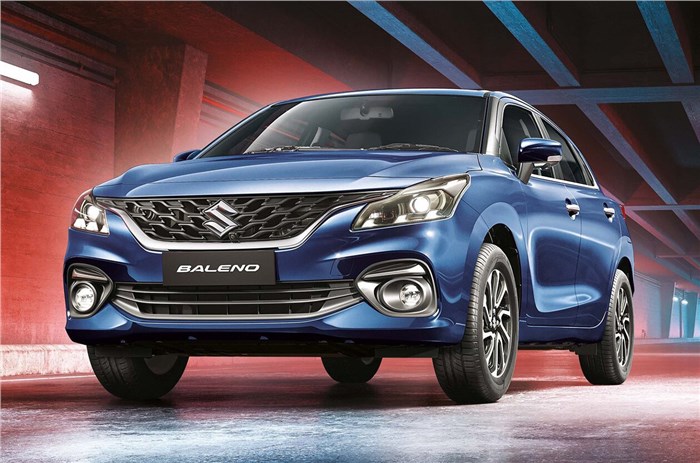 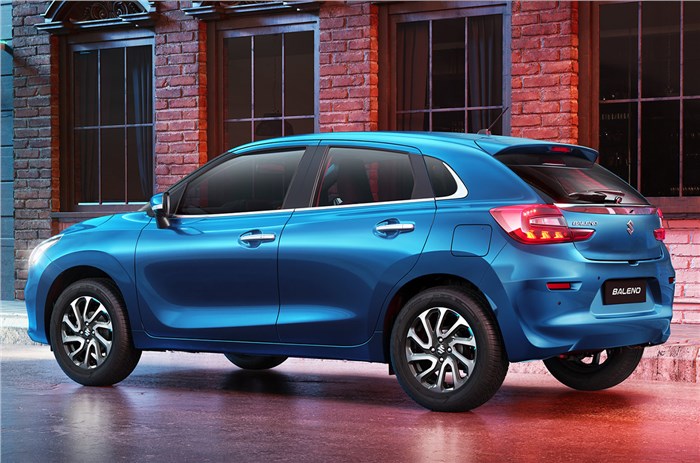 The refreshed Maruti Suzuki Baleno has just been launched in India, with prices starting at Rs 6.35 lakh and going up to Rs 9.49 lakh (ex-showroom, India). Bookings for the new Baleno have also been opened officially and deliveries are set to begin from today itself. The new Baleno will also be offered under Maruti's subscription scheme, with monthly fees starting at Rs 13,999 (this includes vehicle registration, maintenance, insurance and road side assistance).

Styling is an area where the new Baleno has been updated significantly over the outgoing model. Up front, there is a wider, honeycomb-patterned 'NEXWave' grille with a silver accent at its base that extends into the new wraparound headlights, accompanied by a flatter clamshell bonnet, a re-profiled bumper and new fog light housings. The projector headlights are also wider and have a new three-element LED Daytime Running Lamp signature which will be common to all future Nexa models.

The main changes on the side are the new 16-inch alloy wheels, sharper shoulder line and longer chrome strip at the base of the window line that now extends up to the rear quarter glass. The rear features new C-shaped LED tail-lights, which extends onto the tailgate as well as a new bumper.

Inside, the Baleno gets an all-new, three-layered design for the dashboard, which, in the top-spec model, gets a black top, a full-width silver accent in the middle and a dark blue finish at the bottom. This dark blue theme is carried over to the door cards and seat upholstery. The new Baleno's dashboard design is quite similar to the new S-Cross that is sold abroad and the upcoming new Brezza is also expected to have a similar dashboard design.

Additionally, the updated Baleno also comes with a new steering wheel (similar to the one in the Swift), new front seats, new switchgear for climate control and a new design for the instrument cluster design, which is again shared with the new S-Cross.

Powering the refreshed Baleno is a solitary 90hp, 1.2-litre, four-cylinder DualJet K12N petrol engine. The engine can be had with either a 5-speed manual or a 5-speed AMT automatic gearbox (replacing the older model’s CVT unit). ARAI-claimed fuel economy of the new engine with the manual gearbox is 22.35kpl, while the new AMT versions return 22.94kpl.

Maruti has also given the Baleno a new suspension setup along with larger 14-inch disc brakes for the front wheels.

As with the outgoing model, the new Maruti Suzuki Baleno will continue to go up against other premium hatchbacks in our market, namely the Hyundai i20, Tata Altroz, Honda Jazz, VW Polo and the soon to be updated Toyota Glanza.

With prices ranging between Rs 6.35 lakh-9.49 lakh, the new Baleno undercuts most of its rivals, including the Hyundai i20, Honda Jazz, Toyota Glanza and Volkswagen Polo. The Hyundai i20 saw its price rise with the new model due to a notable step up in features and ranges between Rs 6.98 lakh-11.47 lakh. Meanwhile, prices for the Honda Jazz fall between Rs 7.71 lakh-9.95 lakh.
Even the Toyota Glanza, which is based on the previous iteration of the Baleno, is pricier than the new one, with prices starting at Rs 7.70 lakh and going up to Rs 9.66 lakh. The decade-old Volkswagen Polo, meanwhile, ranges between Rs 6.45 lakh-10.25 lakh. Maruti has, thus, priced the Baleno quite competitively in its class, as even with a significant leap in terms of technology and equipment, it’s more affordable than its rivals. It is only the Tata Altroz in this segment that undercuts the new Baleno, priced between Rs 5.99 lakh-9.39 lakh. 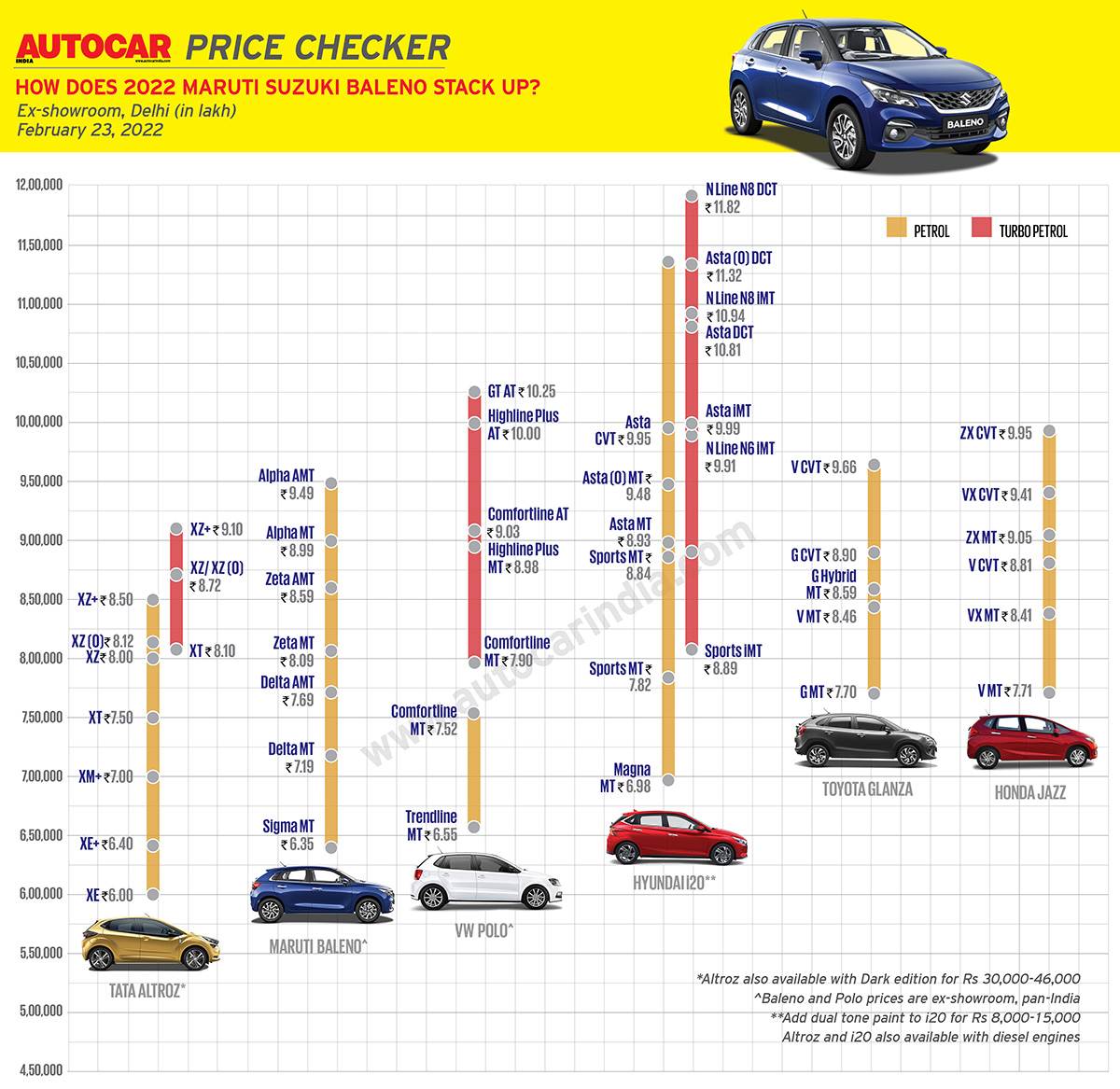