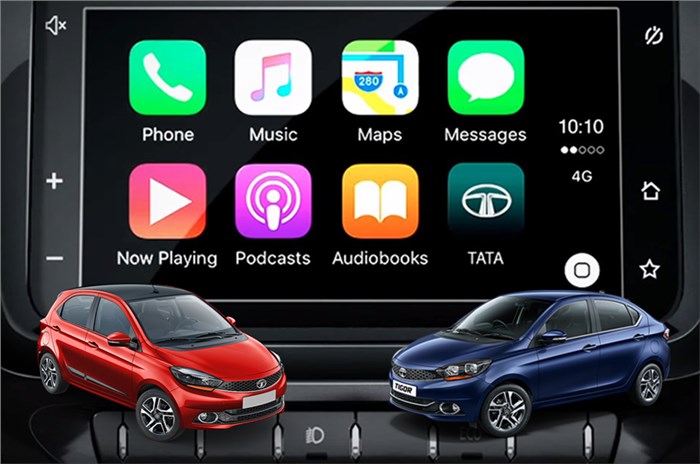 The popular hatchback and sub-four metre sedan now get Apple’s connectivity suite in addition to already being compatible with Android Auto.

The Tata Tiago hatchback and Tigor compact sedan have been consistent performers for the Indian carmaker. In a bid to keep them fresh, both cars were updated in late 2018 with new top-spec XZ+ variants, which saw the addition of snazzier headlamps and alloy wheels, among other features. Also a major part of the refresh was a 7.0-inch touchscreen infotainment system, replete with Android Auto, which replaced the clunkier 5.0-inch touchscreen available before. Now, Tata has rolled out Apple CarPlay compatibility for this infotainment system, which will allow iPhone users to exploit its connectivity features to the fullest.

To put things into perspective, the Tata Tiago goes up against other budget hatchbacks including the Maruti Suzuki Wagon R and Hyundai Santro, all of which come with similarly-sized displays and support Android and Apple smartphone integration. The Tata Tigor rivals the Maruti Suzuki Dzire, Honda Amaze and Ford Aspire, all of which now are on even footing in terms of their infotainment systems.

Interestingly, the 2019 model year Hexa comes with the same 7.0-inch touchscreen display, though it remains to be seen if, and when, Tata will update it with Apple CarPlay. It must be mentioned that the Tiago NRG, Tiago JTP and Tigor JTP continue to be offered with the older 5.0-inch display unit that lacks smartphone integration altogether.

Mechanically, the Tiago and Tigor duo remain unchanged. They are offered with an 85hp, 1.2-litre petrol engine and a 70hp, 1.05-litre diesel mill. While a 5-speed manual gearbox is standard, the petrol also gets the option of a 5-speed AMT auto transmission.