The Tiago has been around for six years, with the hatchback achieving the 3 lakh unit production milestone in 2020. 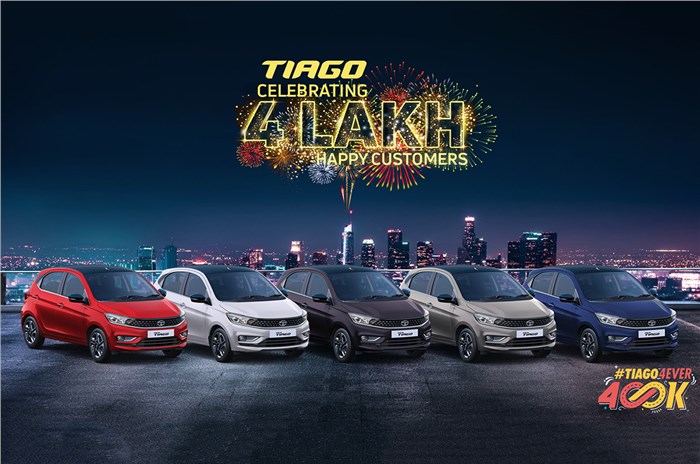 Tata Motors has achieved a new production milestone for the Tiago, as it rolled out the 4,00,000th unit from its Sanand facility in Gujarat. The Tiago has reached this landmark after being on sale for six years in India.

The Tiago was first launched in 2016 as the spiritual successor to the Indica. Since then, a facelift was introduced for the Tiago in 2020 that uses the automaker’s ‘Impact Design’ philosophy. This was also when Tata Motors achieved the 3 lakh production milestone for the midsize hatchback.

An updated Tiago NRG based on the facelifted version was launched in 2021 that came with faux body cladding for a rugged look. Three months ago, Tata Motors launched the Tiago iCNG in an effort to compete with the Maruti Suzuki Celerio CNG.

The petrol-powered Tiago uses the tried and tested 1.2-litre, three-cylinder Revotron motor, producing 86hp and 113Nm via a 5-speed manual or a 5-speed AMT gearbox.

In March 2022, Tata Motors expressed its aim of producing 5 lakh cars a year via its Sanand plant. As it stands, the automaker currently has a capacity of producing 4,80,000 units across its multiple plants. Tata Motors recently unveiled the Curvv midsize electric SUV concept and will soon launch the long-range version of the Nexon EV.

Also See:
Discounts of up to Rs 65,000 on Tiago, Harrier this month
Differentiated body styles have worked well for us: Tata Motors