Special edition SUVs get cosmetic changes and feature additions, and are based on top-spec variants. 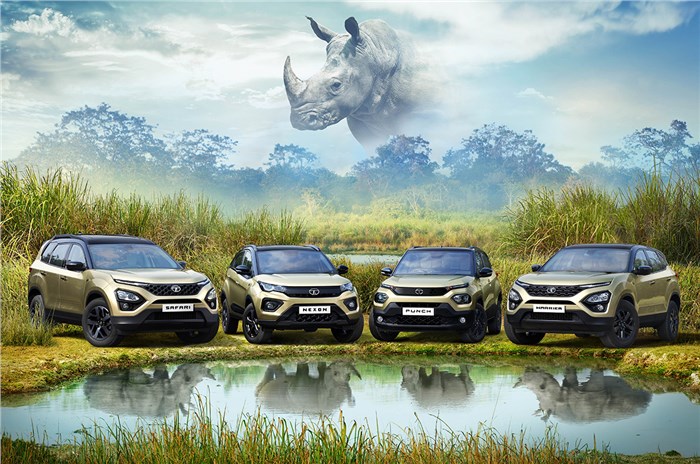 Tata Motors has launched new Kaziranga Editions of its entire SUV line-up, which includes the Punch, Nexon, Harrier and Safari models. These new editions gain exterior and interior changes along with new features.

Tata Kaziranga Edition SUVs: what are they?

At a recent IPL event, Tata showcased the Punch Kaziranga Edition which will be auctioned off to fans and proceeds of which will go towards conservation efforts at the Kaziranga National Park in Assam. The Tata Kaziranga Edition SUVs have been inspired by the Indian one-horned rhinoceros.

On the exterior, the Kaziranga Edition SUVs come finished in an exclusive Grassland Beige paint shade with contrasting blacked-out treatment for the roof, wheels, wing mirrors and all other chrome trims. The SUVs also get a blacked-out rhino motif on its front fender and special door scuff plates with ‘Kaziranga’ lettering on it. The rhino motif is also present on the rear windscreen of the SUVs.

Inside, the Kaziranga Edition SUVs come with dual-tone schemes with Earthy Beige leatherette upholstery and an all-black dashboard. The Nexon, Harrier and Safari get wood trim in the centre of the dashboard, while the Punch gets an Earthy beige tri-Arrow finish. The door pads and seat upholstery also get the dual-tone black and bronze treatment. The front seat headrests of these four models also feature a silhouette of the one-horned rhinoceros.

The Kaziranga Edition is only a cosmetic job and hence all SUVs remain mechanically unchanged. This means the Punch continues with its sole 86hp, 1.2-litre petrol engine; the Nexon with its 120hp, 1.2-litre turbo-petrol and 110hp, 1.5-litre diesel engines; the Harrier and Safari ontinue with the FCA-sourced 170hp, 2.0-litre diesel engine. Gearbox options also remain the same as the rest of the range.

Do you like the look of the new Tata Kaziranga Edition SUVs? Let us know in the comments.