We do an on-paper comparison of the soon-to-be-launched Tata Nexon, Maruti Suzuki Vitara Brezza and Ford EcoSport. 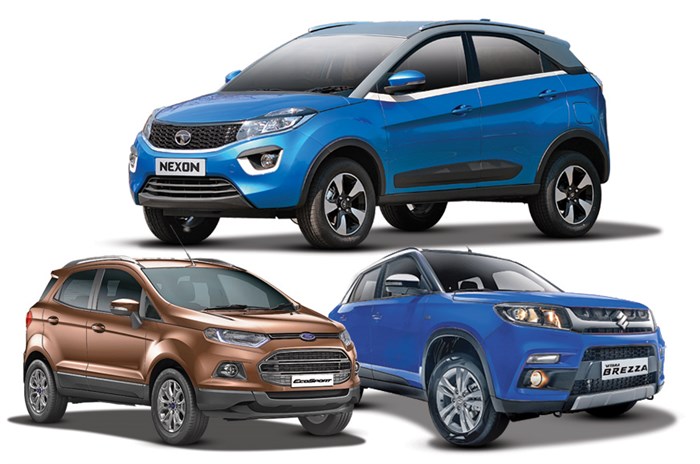 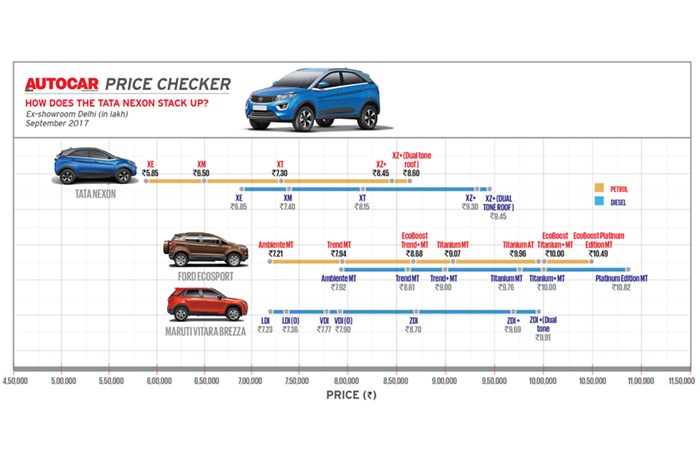 Tata’s entry into the compact sub-4-metre SUV segment is sure to pose a problem to its competitors, the stalwart Ford EcoSport, and the current segment leader, the Maruti Suzuki Vitara Brezza. The Nexon, which has launched at Rs 5.85 lakh (ex-showroom, Delhi), is an all-new SUV sporting new engines, a spunky design and some first-in-class features. The compact SUV will be available in four trim levels (XE, XM, XT and XZ+) and two engine options, a 110hp, 1.2-litre, turbo-petrol and a 110hp, 1.5-litre, turbo-diesel. Will it be enough to take on its rivals? We find out.

The Vitara Brezza is not a butch-looking car, yet it has got a defined SUV silhouette that Indian buyers seem to like. While Maruti Suzuki could have been a bit more adventurous styling with its styling, they have done well to add some glam to the Brezza’s simple lines with the contrast roof.  Its 198mm ground clearance definitely provides that go-anywhere look but venture into the rough stuff at your own peril.

The EcoSport is styled in a rather sporty manner while retaining the rugged SUV-ish look. The oversized octagonal grille, high bonnet and tailgate-mounted spare wheel all lend it a unique and youthful air. Its 200mm of ground clearance is great for Indian roads but actual off-roading is a serious no-no.

Ford’s EcoSport is due for a refresh quite soon, which should up its desirability quotient. The exteriors of the facelift model feature new projector headlamps, reshaped fog lamps, a new hexagonal grille and bumper. Reprofiled tail-lamps and a restyled bumper at the rear along with new alloy wheels will round off the changes to the outsides of the compact SUV.

The Tata Nexon has clearly been styled with Tata’s Impact design philosophy with the muscular stance and a coupé-like roofline making it distinctive. An attractive styling element is a horizontal strip that divides the headlamp housing. The Nexon uses its body paint to contrast with the roof and has a unique ceramic finish around the headlamps, fog lamps and LED tail lamps. The 200mm ground clearance emphasises the SUV-look but it isn’t expected to be a serious off-roader.

The Vitara Brezza offers a commanding view of the road with its SUV-esque seating position and offers a neat and user-friendly cabin experience. The cabin can be jazzed up with various colours and trims but it still remains ergonomic with plenty of storage space including two gloveboxes. The plastic quality is a bit of a let-down though. The 328-litre boot is smaller than its American rival but loading and unloading luggage is easier. The top-spec version of the Maruti comes with quite a lot of kit including push-button start, steering-mounted audio controls, Bluetooth telephony and audio streaming, auto climate control, rear-parking sensors, auto headlamps and rain-sensing wipers. The SmartPlay infotainment system is the highlight and there’s also satellite navigation, a reverse camera and cruise control on offer.

It’s easier to find the correct driving position in the EcoSport thanks to the tilt and telescopic adjust for the steering. There are quite a few cubbies and storage spaces in the cabin, which has been topped with chrome that looks a bit garish but adds a premium feel nonetheless. While the EcoSport’s boot is 346 litres and, like the Brezza and the Nexon, can be increased thanks to the 60:40 split folding rear seats, getting large bags in and out is comparatively more difficult. In terms of equipment, the EcoSport matches the Brezza but its infotainment system isn’t as comprehensive. However, the Ford does get six airbags in the top-spec Titanium variant compared to the Maruti’s two.

The Tata Nexon’s cabin is simple, straight forward and well-equipped. The 6.5-inch HD touchscreen display, climate control, rear air con vents and voice commands for the eight-speaker Harman infotainment system on top-spec models, and various nooks and crannies to store objects makes the interiors a good place to be in. A standout feature is the drive mode controller, which interestingly, isn’t a small button, but a chunky knob to choose between the three drive modes – Eco, City and Sport. The umbrella holders in the doors are a nice touch. The 350-litre boot looks to be comparable to the other two.

Maruti Suzuki offers the Brezza with its 1.3-litre, Fiat-sourced diesel engine, which produces 90hp at 4,000rpm and 200Nm at 1,750rpm that is mated to a five-speed manual gearbox. Weighing between 1,170-1,195kg, the Brezza is the lightest out of the lot though its lower power figure means its on-road performance should be just about adequate. The Brezza may get the Baleno RS’ 1.0-litre Boosterjet turbo-petrol mill that makes 102hp and 150Nm of torque to better compete in this segment.

Ford, on the other hand, has three engine options for the EcoSport – a 1.5-litre petrol engine making 112hp and 140Nm, a 1.5-litre diesel motor producing 100hp and 205Nm, and the 1.0-litre turbo-petrol Ecoboost mill that puts out 125hp and 170Nm of peak torque. The diesel and the EcoBoost engine are mated to a five-speed manual transmission while the 1.5-litre petrol gets the option of a six-speed automatic. The EcoSport weighs about 100kg more than the Brezza but should sport a similar power-to-weight ratio.

Tata’s Nexon comes with all-new engines that, on paper, edge out its competition. The 1.2-litre, turbo-petrol, three-cylinder Revotron motor belts out 110hp and 170Nm of torque while the 1.5-litre, four-pot diesel Revotorq mill churns out 110hp and 260Nm of torque. At launch, both engines will be paired to a six-speed manual ‘box though AMT versions are expected at a later date.

A proper road test will be necessary to decide which compact SUV will rule the roost but on paper, it seems like Tata’s Nexon will be a very serious competitor in this segment.

Tata Nexon XE, XM and XT seen at a dealership