How does the Skoda Rapid TSI stack up against rivals? 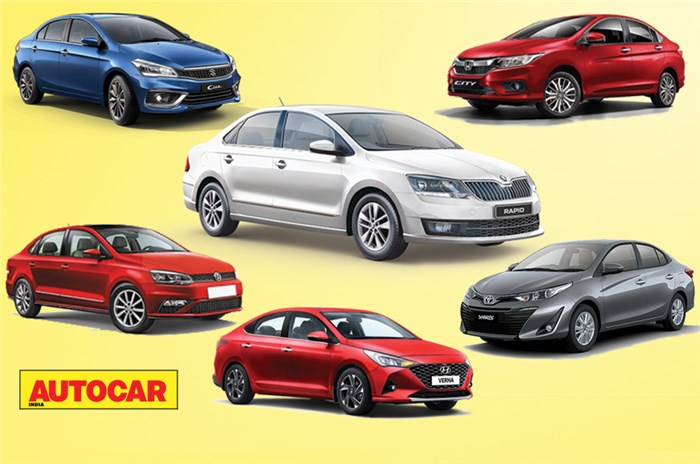 Skoda recently took the covers off the updated Rapid, and much to everyone’s surprise, launched it at an aggressive price of Rs 7.49 lakh (ex-showroom India). Transformed into a petrol-only model for the BS6 era, the Skoda Rapid gets an all-new 1.0-litre turbo petrol engine and a 6-speed manual transmission. Skoda has added some new features as well. But what makes this updated Skoda Rapid stand out amidst the competition? We analyse its size, engine specs, features and prices to answer just that.

How does the Rapid compare on size?

Till such time the all-new Honda City goes on sale, the Maruti Ciaz holds fort as the longest and widest mid-size sedan you can have. The roomy Ciaz also boasts of the longest wheelbase, which at 2650mm, measures almost a 100mm longer than the Rapid, VW Vento and Toyota Yaris wheelbases. The current Honda City and facelifted Hyundai Verna are similar in length and wheelbase, though the City is the roomier of the two sedans. It is interesting to note that while the Verna and City have considerably grown in size over the years, the Rapid and Vento have remained unchanged since their introduction in 2010 and 2011, respectively.

The Toyota Yaris and the Hyundai Verna have the shortest turning circle while the Maruti Ciaz and the Honda City offer the largest boot space at 510 litres.

How does the Rapid compare on power and economy?

In its latest avatar, the Rapid is only available with a 1.0-litre three-cylinder turbo-petrol engine mated to a 6-speed manual transmission. And that is the spec of choice for this comparison. Interestingly, the recently-updated Volkswagen Vento gets the same engine-gearbox option and additionally offers the option of a 6-speed torque converter automatic transmission.

The Rapid’s Japanese and Korean rivals use 1.5-litre naturally aspirated petrol engines, and all get the option of either manual or automatic transmissions. It’s the Honda City’s high revving naturally-aspirated petrol engine that makes the most power at 119hp, though the Hyundai Verna isn’t too far behind with 115hp on call. However, forced-induction gives the Skoda and the Volkswagen an edge in terms of torque. The TSI engine’s 175Nm is significantly higher than what the Rapid’s naturally-aspirated rivals produce. Hyundai also offers the Verna with a 120hp and 172Nm, 1.0-litre turbo-petrol engine. However, it’s only offered with a 7-speed dual-clutch transmission; there’s no manual option.

Due to its lighter weight and its mild-hybrid system, the Maruti Ciaz is the most fuel efficient of the lot, despite having a mere 5-speed manual transmission. What’s interesting however, is that the second-most fuel-efficient car is the Rapid with a claimed fuel efficiency figure of 18.97kpl, even higher than the Vento’s 17.69kpl figure. The Toyota Yaris is the least fuel-efficient one here.

How does the Rapid compare on features?

We’ve considered the Rapid in second-from-top Style trim here. The Rapid Style is priced Rs 30,000 less than the range-topping Monte Carlo variant that only gets additional cosmetic add-ons for the added outlay. The Rapid’s basic equipment list is at par with its competitors, but when it comes to feel-good features it is the Hyundai Verna which clearly stands out. The Hyundai Verna gets kit like cooled front seats, wireless charging, a tyre pressure monitor, LED headlamps, sunroof, 6 airbags and ESP to name a few. The Yaris offers the most safety kit, like 7 airbags, ESP, all-wheel disc brakes, hill-start assist, front and rear parking sensors.

How does the Rapid compare on price?

With a killer entry-level price tag of Rs 7.49 lakh (ex-showroom), the Rapid not only undercuts its direct competitors by a huge margin but also undercuts some sub-4-metre sedans and premium hatchbacks. What’s more, the base Rapid Rider variant is reasonably well equipped too with convenience features including rear AC vents, audio system and automatic climate control. A point to note is that the next variant in the Rapid range is a full Rs 2.5 lakh pricier and this changes the entire value equation.

The fully-loaded variant of the Ciaz is Rs 1.70 lakh cheaper than the top-spec Rapid, which makes the Maruti the most value-for-money offering in terms of price-to-size ratio. For those who want maximum features for the money, the Verna is the one to go for, which offers several segment-first features at a rather competitive price. The fully-loaded Honda City and Toyota Yaris are pricey.

In summary, the base Skoda Rapid Rider is an attractive offering for the money. However, higher variants of the Rapid aren’t as good value, especially when seen in light of equally competent and better equipped rivals. Could the driving experience change the balance in favour of the Rapid? We can’t wait to find out.