Which one makes the strongest case for itself on paper: the Skoda Karoq, Volkswagen T-Roc or the Jeep Compass? We break it down for you. 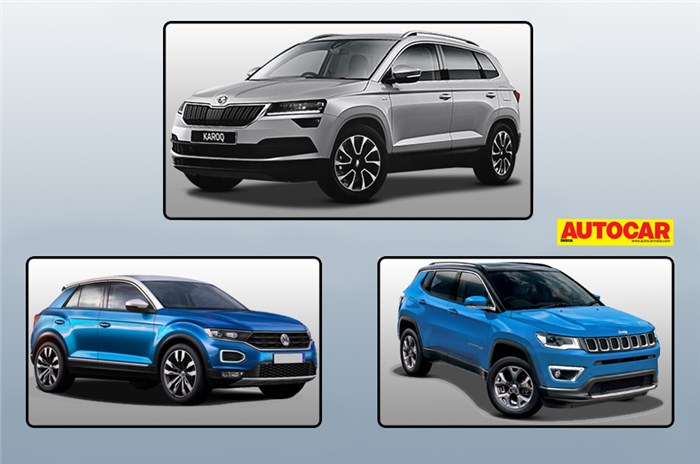 Looking for an urban SUV that’s a bit more upmarket than the extremely popular Kia Seltos and Hyundai Creta? The new Skoda Karoq should be on your shortlist. But how does the Karoq stack up against its closest rivals, the VW T-Roc and Jeep Compass? Read on to know.

Which one is largest?

The Jeep Compass is the longest and tallest amongst the trio, so it’s likely to appeal to those buyers seeking ‘road presence’. The Karoq is merely 3mm shorter in length and 16mm lower in height, compared to the Jeep, and what’s more is that it is the widest model here. The Karoq has the longest wheelbase too, if only by 2mm. The Volkswagen T-Roc is the smallest in size here, and is comparable to the much cheaper Maruti S-Cross in terms of dimensions. In terms of practicality, the Karoq gets the biggest boot, followed by the T-Roc and the Jeep.

Which one gets the most features?

For the comparison, we’ve considered the equipment list of the Jeep Compass’ top-spec Limited Plus variant. The other two SUVs are available in only a single, fully-loaded  variant. All three SUVs are closely matched in terms of features, although the Karoq offers a bit more in terms of safety and some feel-good kit. Even so, it’s hard to justify that Rs 5 lakh premium over the T-Roc.

Which one is most powerful?

The Skoda Karoq and the Volkswagen T-Roc share their engine and transmission. Both models come powered by a 1,498cc, 4-cylinder turbo-petrol engine that is mated to a 7-speed dual-clutch transmission. With identical power and torque numbers, as well as a similar kerb weight, both these are likely to offer similar levels of performance. Interestingly, both the Karoq and T-Roc are equipped with active cylinder deactivation technology, which switches off up to two cylinders in the interest of fuel efficiency.

The Jeep Compass’s 1,368cc, 4-cylinder turbo-petrol engine is the smallest unit here but also delivers the most power. However, the Compass is the heaviest SUV in the trio and this reflects in its power-to-weight and torque-to-weight ratios. The engine’s punchy power delivery, however, makes the Jeep accelerate to 100kph from a standstill in just 10.29 seconds despite its weight disadvantage; the lighter Karoq with its linear power delivery is marginally quicker, dispatching the sprint in just 10.03 seconds. Our review of the VW T-Roc showed that it's the quickest model here to accelerate to 100kph, with a 9.89 second time.

The Jeep does have an important edge over its German rivals. Unlike the single-spec T-Roc and Karoq, the Compass is available in a variety of engine-gearbox versions, and offers buyers the all-important option of a diesel. In addition to the turbo-petrol automatic in focus here, Jeep offers a turbo-petrol manual variant, as well as a diesel engine, which comes with manual and automatic options, and front- or four-wheel drive.

How do they compare on price?

The Skoda Karoq is the priciest SUV here. It’s being brought to India as a full-import and attracts the highest taxes and duties. However, the VW T-Roc that’s also brought in as an import is a full Rs 5 lakh cheaper, and doesn’t trail the Karoq in terms of equipment by all that big a margin.

The Jeep Compass has the lowest starting price. Even its fully-loaded top-spec Limited Plus variant sits at Rs 21.92 lakh; a cool Rs 3 lakh lesser than the Karoq. What’s more is that the Compass is also available with a 6-speed manual gearbox mated to the 1.4-litre turbo engine, but that’s available only in the base variant, which is priced significantly lower at Rs 16.49 lakh.

Which is the SUV of interest?

Going purely by specs and numbers, the Jeep Compass seems to be a bit larger than the Skoda Karoq in dimensions, and its engine and transmission offer comparable performance. The T-Roc is the smallest of the bunch, so it might not appeal to those looking for road presence from their ‘SUV’, but with its radical styling, it is the one that’s bound to stand-out in a crowd. The Karoq appears to be the best-equipped of the three SUVs here, but it is also the priciest. Which is the best to drive? Only a real-world comparison will be able to answer that, so watch this space.