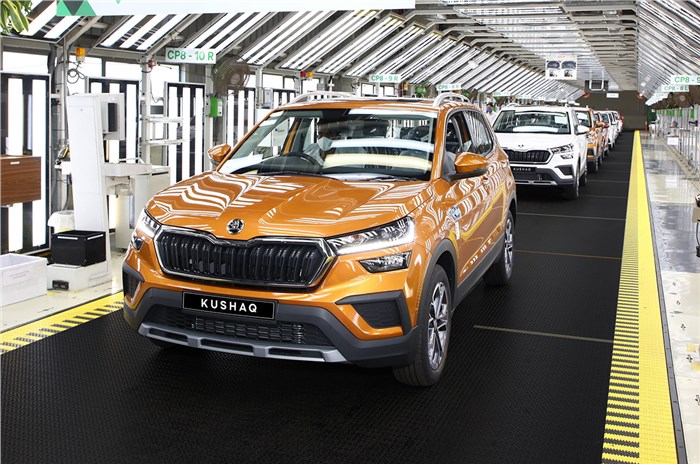 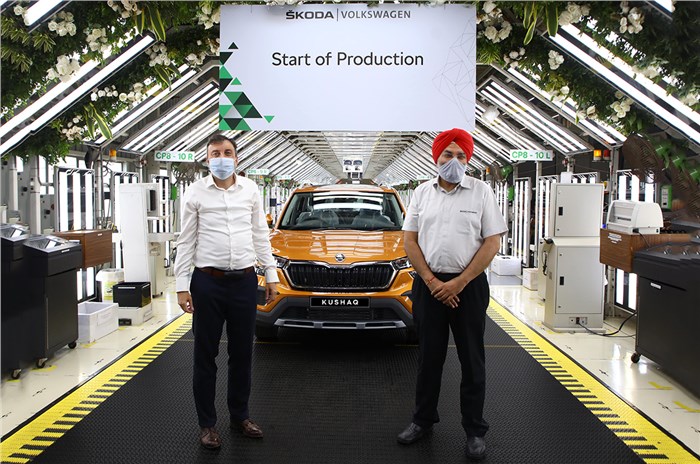 Skoda has begun production of the Kushaq SUV at its Chakan plant. The Kushaq is Skoda's first product under the Volkswagen Group's India 2.0 plan. Price announcement for the Kushaq is expected to take place in the coming weeks.

Revealed in production-spec in March 2021, the Kushaq doesn’t stray far from last year’s Vision IN concept in overall looks. The design is in line with Skoda’s larger SUVs, with the brand’s trademark grille flanked by sleek headlamps and a high-set secondary light cluster, and plenty of cuts and creases along the body.

The rear is characterised by a faux diffuser element on the bumper, a roof-mounted spoiler and large wrap-around LED tail-lamps. Rounding out the looks will be 16-inch wheels on lower variants with the fully-loaded SUV sitting on 17-inch alloys. The Kushaq will be available in a choice of three variants – Active, Ambition and Style.

The cabin design is in line with the newer Skodas on sale in international markets. It comes with a layered dash, a free-standing touchscreen – sitting on a shelf-like design element atop the centre console – a two-spoke steering design and large, vertically positioned, rectangular side air-con vents.

There will be plenty of kit on offer, too, with fully-loaded models packing in a large 10-inch touchscreen, connected car tech, ventilated front seats, ambient lighting, in-car Wi-Fi and a sunroof, to name a few. Safety kit will include six airbags, auto headlamps and wipers, a multi-collision braking system, tyre pressure monitor and hill start assist. All variants will also come fitted with ESC as standard.

The Kushaq will be offered with a pair of turbo petrol engines – a 115hp, 1.0-litre TSI turbo petrol and a larger and more powerful 150hp, 1.5-litre TSI unit. A 6-speed manual gearbox will be offered as standard with both engines. Additionally, both units will also get the option of automatic gearboxes – a 6-speed torque converter for the 1.0 TSI and a 7-speed DSG for the 1.5 TSI. We have driven the pre-production Kushaq prototype, and you canread our initial impressions here.

At the time of launch, the Kushaq will go up against the popularHyundai Creta,Kia Seltos,Nissan Kicks,MG HectorandTata Harrier. Also joining the list of rivals will be its sister car, theVW Taigun, which is expected to arrive in the coming months. Expect prices for the Kushaq to be in the range of Rs 10-16 lakh (ex-showroom).